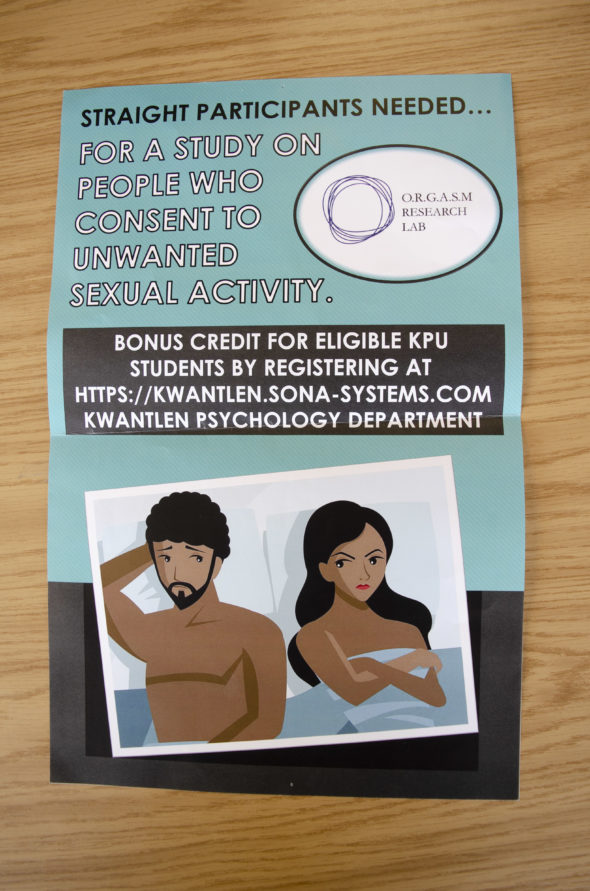 One of the original posters that the KSA removed from notice boards, which does not include the REB approval or project number required for participant notices. (Braden Klassen)

A KPU Psychology student’s study about consensual but unwanted sexual activity is set to be finalized in April and has been submitted to the Society of the Scientific Study of Sexuality, with the hopes of being presented in November.

“We believe it’s a very important study,” says Dr. Cory Pedersen, the Chair
of the Faculty of Psychology who is overseeing the research.

“What we’re interested in studying is whether or not people have ever participated in sexual activity that is consensual, but not necessarily desired,” says Pedersen. “In the literature, this is called ‘sexual compliance.’”

The study is being conducted through surveys that ask participants about their experience with participating in sexual activity even though they did not necessarily want to, as well as exploring the circumstances and reasons behind them.

“We intend to dispel these gender stereotypes about men, that they have an insatiable sexual appetite. We also hope to dispel the belief that women play a passive role in sexual initiation,” says Pedersen. “Ultimately, if we can dispel these highly-ingrained gender stereotypes, then it can allow men to be more readily able to reject unwanted sexual activity, and it can alleviate male concerns regarding their gender role.”

The contents of a poster spreading awareness of the study has led to some pushback from members of the Kwantlen Student Association, who say that they received complaints from students concerning the potentially triggering posters that had been put up around campuses. These posters solicited participants for the study with wording that read: “Straight participants needed … for a study on people who consent to unwanted sexual activity.”

“Several students had come to us to complain about the nature and contents of a poster,” says Murdoch de Mooy, KSA VP University Affairs. “They were quite worried and had reactions to the idea that, basically, it was saying ‘consenting to rape,’ which is something you cannot do.”

The complaints motivated the association to take the posters down from KSA-managed notice boards.

“I think people have misinterpreted or misunderstood that this is actually a phenomenon, and that any time it is unwanted, it is therefore rape, and that is just not true,” says Pedersen.

De Mooy says he understands the intention behind the study, and believes that the research that comes as a result of it will be important, but that the posters do not comply with KPU policy.

The KPU Procedure of Dealing with Sexual Violence and Misconduct defines consent as “voluntary agreement to engage in sexual activity.”

“The individual must actively and willingly give consent to the sexual activity in question,” it reads.

Additionally, de Mooy says that he believes that there was a flaw in the Research Ethics Board’s procedure of approving the study. The board has a policy requirement that “public notices (posters, emails, etc.) soliciting participation in the research shall contain reference to the approval of the project by the Kwantlen REB and the project number assigned by the Office of Research Ethics.”

In an email statement, Pedersen confirmed that the study was approved on Nov. 27, 2018, and that she and the student researcher contacted the KSA in late January and early February to discuss the removal of the posters before contacting KPU administration.

“On February 6, the KSA were advised by senior leadership that the posters should not have been removed by the KSA, as posters are governed by KPU policy procedure, not by KSA policies,” wrote Pedersen her email response, adding that “all complaints (whether by students, faculty, or staff) regarding research recruitment—or indeed about the nature of research itself—should be directed to the REB for consideration. Not to the KSA.”

De Mooy says he will be meeting with the REB to discuss the complaint process to determine how this situation came about and how similar situations can be avoided in the future.

In an email response to an interview request from The Runner, Research Ethics Board Chair Dr. Lisa Freeman stated that the board “does not comment on specific research projects nor its review of research.”

“These matters must remain confidential,” she wrote.