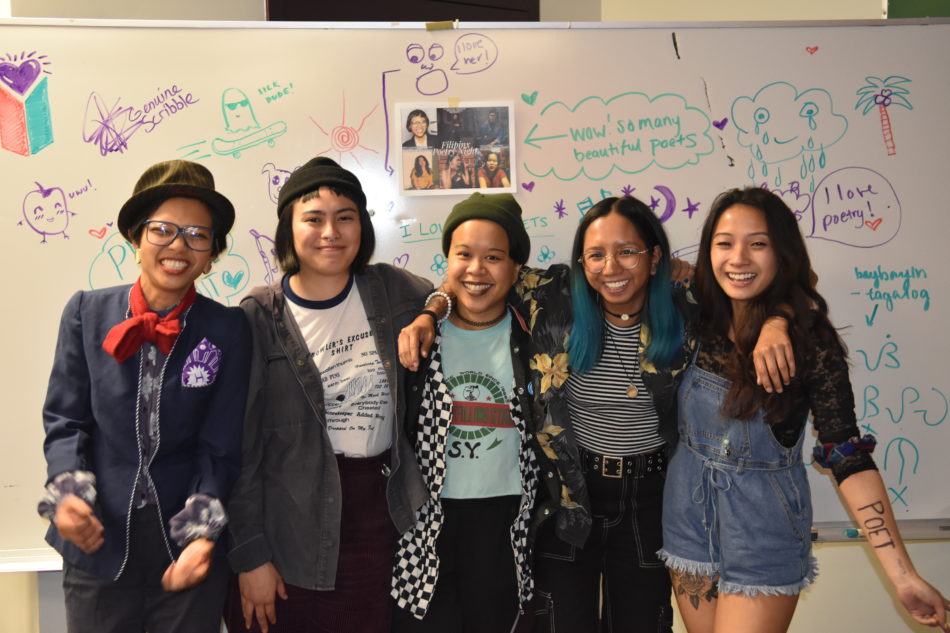 As host Tawahum Bige pointed out at the beginning of the night, literary events are often dominated by white writers. There will occasionally be a few token BIPOC (Black, Indigenous, People of Colour) writers added to the lineup, but even then, they can end up burdened by the weight of representation.

Rather than lumping all BIPOC folks together into one demographic, the Fillipinx Poetry Night hosted by KPU’s Creative Writing Guild aimed to highlight marginalized communities as a group of diverse writers.

The event took place in Fir 128 on April 24 and featured three KPU students—Ivy Ruth, Mirth, and Mariah Negrillo-Soor—as well as three community members: Tin Lorica, Kimmortal, and Mildrid Grace German. All the featured poets identify as Filipinx, meaning that they and their relations have a history of migration from the Philippines.

Mirth, a first-time feature poet, says she was “overwhelmed by the energy in the room.” Leila Nicar, a creative writing student on exchange in Preston, England, did not want to miss out on the chance to see so many talented Filipinx poets gathered in one space, so she attended the event via video call. She said she could feel “the amount of energy and love and support in that room” even “eight hours away and across the Atlantic.”

“It is a community-building thing,” says Mariah Negrillo-Soor. “It speaks to the shared experience [of being Filipinx]. It’s feeling seen, and people in the audience feel seen too.”

Kimmortal, a fiery MC who spits to decolonize and who just dropped a new album entitled X Marks the Swirl, is no stranger to performing. They said that, while listening to the first half of the show, the connection they felt to the other poets made them reconsider their setlist.

“I hold back sometimes with some audiences in what I choose to share. Knowing there are Filipinos in the crowd is affirming to my layered existence,” they say. “This is my community and I want to reach my community. These are the people I want to enrich with my poetry and I want to be enriched by them.”

“It hits deeper,” they continue, “because we have so many similar experiences even though we’re so different. Even though we’re all Filipinos, I want to be in a space where we [acknowledge] we’re all very different [too]. It’s validating.”

Mariah Negrillo-Soor “wanted [her work] to be relatable but also didn’t want to overstep and speak for a whole group of people.” Tin Lorica acknowledges the differences in each poet’s story, as not everyone had to personally go through migration but might still feel impacted by their family’s experience.

Mildrid Grace German added that being able to perform in a university setting marked a milestone for her as a poet.

“In the Filipino community, we have challenges in education. First, our parents were taken out of accreditation, so the youth now suffer the systemic barrier,” she explains.

Mirth explained that, although many of her childhood friends were Filipinx, she “never felt a part of the Filipino community.”

The Creative Writing Guild’s first literary event to highlight poets from marginalized groups was the South Asian Femme Poetry Night on Feb. 20. Check out their Facebook page to keep an eye out for the next poetry night to be held on campus.