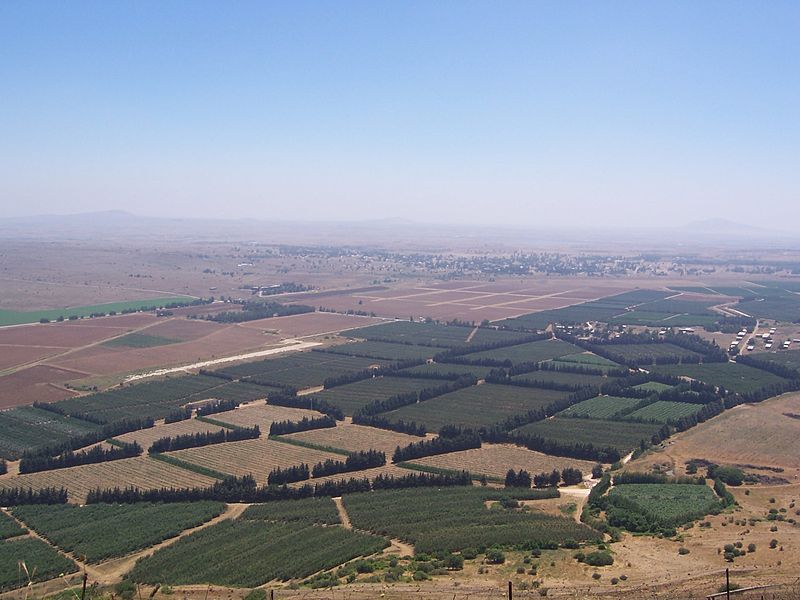 The Golan Heights’ border with Syria proper. The Golan Heights end (and Syria begins) where the farmland ends. In the background is the deserted city of Quneitra in Syria. The white buildings on the right are mostly UN buildings. (wiki.commons)

Late last month, U.S. President Donald Trump declared that the United States considers the Golan Heights—a region of Syria that was annexed by Israel during the Six-Day War—to be part of Israeli territory. This makes the United States the only country in the world that currently recognizes the area as “Israeli.”

By all accounts, Trump making this statement was a foreign policy mistake.

As the name suggests, the Six-Day War lasted only six days, and was a conflict fought in 1967 between Israel and its neighbours Egypt, Jordan, Syria, and Iraq. There’s a lot to say about the background of this conflict, but it was just one in a series of wars waged by nearby Arab countries which refused to recognize Israel.

Despite being totally outnumbered, Israel launched a preemptive surgical strike against Egypt, eliminating the competitiveness of its air force, which was effectively the entire opposition, within a few hours. Israel would win the war several days later, capturing Gaza and the West Bank from Jordan, the Sinai Peninsula from Egypt, and the Golan Heights from Syria. The Sinai Peninsula would be contested territory until 1975, when it came under Egyptian control.

The Golan Heights would be fought over again during the two-front Yom Kippur War in 1973, when Israel neutralized an attempt by Syria to take the territory back. In 1974, Syria and Israel eventually agreed to allow Israel to control the area, while also establishing a demilitarized zone between the two countries. The UN Disengagement Observer Force remains present in the area to this day.

Israel would later pass the Golan Heights Law in 1981, extending Israeli legal jurisdiction to the area. This was, in effect, an annexation of the region, though Israel never described the action using that term. In response, the UN Security Council—which includes the United States—unanimously declared that, under international law, the Israeli law has no legal effect.

In the current realm of international law, it’s generally accepted that a country can’t simply march its military into a new area, occupy it, and claim that it belongs to them. The idea that Crimea should belong to Russia is generally rejected for the same reason.

Only the United States recognizes the Golan Heights as an area belonging to Israel. Israel was still asking for this recognition during Barack Obama’s presidency, but he reiterated American support for previous UN resolutions while also noting that such a political move would compromise attempts at finding Syrian allies in the conflict against ISIS.

Trump, evidently, had no such reservations. Admittedly, it has been very difficult to find a non-political explanation as to why Trump made this move. It’s indeed true that the Golan Heights can be considered a strategic territory, as it is highly mountainous and defensible in the event of armed conflict. However, even political explanations are difficult to make. Republicans only captured an estimated 17 per cent of the Jewish vote in the 2018 midterm elections, though some fundamentalist Christian voters believe that Jewish people in Israel having full control over the land there satisfies an interpretation of their scripture.

Either way, Trump’s declaration about the Golan Heights and the earlier move of the US Embassy to Jerusalem were both widely interpreted as electoral gifts to Benjamin Netanyahu. His Likud party opposes the idea of a Palestinian state and right of settlement to disputed areas in the region, such as the Golan, which have an estimated 20,000 Jewish settlers living among some 20,000 Syrians, as well as others. With the Likud party gaining even more seats with the recent election, Trump’s move may have indeed paid off for him.