TransLink releases list of most complained about bus routes in Metro Vancouver, with 319 at the top 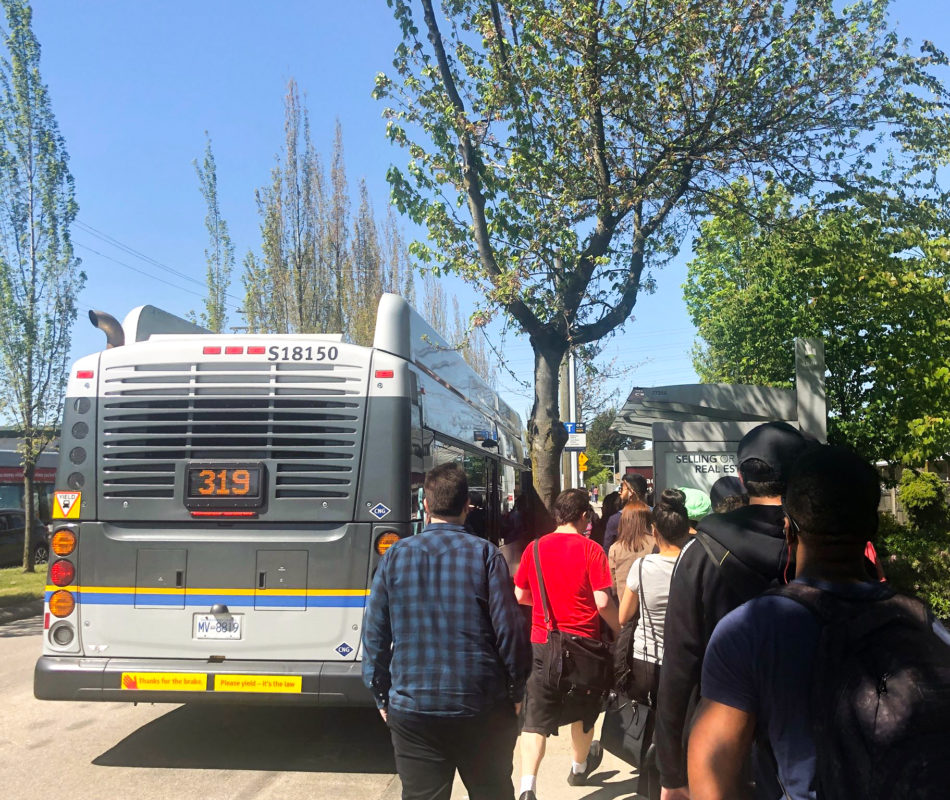 “Move to the baaaack!” is something that anyone who takes the 319 bus route between Newton Exchange and Scott Road station hears a lot. It’s what the driver yells pretty much every time they stop in front of KPU’s Surrey campus during peak hours.

For its part, TransLink has proposed to solve the problem by increasing the frequency of the 319—on Sunday nights.

Like many KPU students, I use the 319 during the week to get to school and to work, so offering more busses at night on the weekend makes little sense to me. Something that makes complete sense, however, is that according to the Surrey Now-Leader, the 319 receives more complaints from passengers than any other bus route in Metro Vancouver.

One of the biggest issues that commuters identified is overcrowding. From my experience, clutching my backpack as close to my body as possible and surrendering any expectation of a comfortable amount of personal space is routine on weekday evenings after class. That is, if I can even manage to get on the bus in the first place.

The evening lineup at the bus stop across the street from KPU can make me feel like I’m in front of the Apple store right before the next iPhone drops. I clutch my Compass Card in one hand and cross my fingers with the other, gauging whether there’s enough space for me to make it through the doors.

One thing that the 319 has over some other bus routes, especially those in Surrey, is that it comes more frequently. But what does that matter if there’s no space on it? Sometimes you’ll find yourself in a shorter lineup, or at least near the front of a line to board the bus. But the 319 is notorious for zipping past stops, already at capacity, leaving you cursing under your breath.

Sometimes, if you’re in luck, the next 319 will be right behind it. But why the hell aren’t these busses timed better? The wait for busses increases when they come in pairs like that. For Surrey students going to Newton exchange, it’s pretty much just as efficient to walk. I’ve found it way faster to ride a longboard in spring and summer.

But if you really think about it, it’s all kind of a big joke, and commuters, especially students, are the butt of it. Every month we pay 50 bucks or more just to waste our time on an immensely flawed and inefficient public transit system.

This is a system that pays its higher-ups more than Canada pays its Prime Ministers, according to a Global News report by Janet Brown which indicates that, in 2017 alone, TransLink CEO Kevin Desmond hauled in more than $450,000.

Meanwhile, here’s me, a student without the ability to opt out of my $150 per-semester MultiPass fee, despite the fact that I could be putting that money towards car insurance or our history-making gas prices.

So how can students be expected to be economically and environmentally conscious by using public transit when public transit just outright sucks? Sure, there are more eloquent ways of saying it, but it’s true—it fucking sucks.

If the goal is to make our cities greener, our roads less crowded, and the collective cost of transportation lower, the issues that are common during a single trip on the 319 need to be fixed.