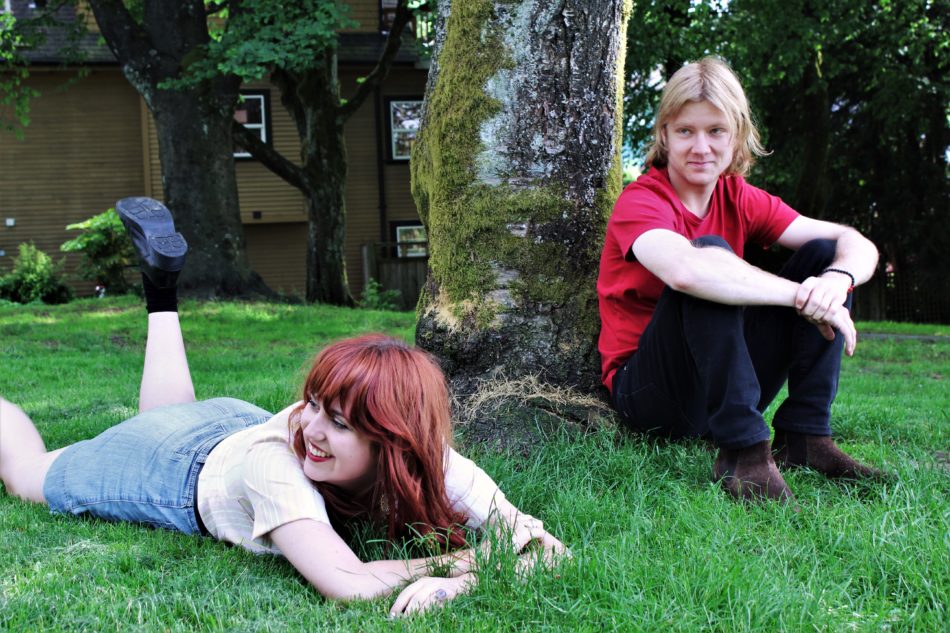 Mila Krajina and Nigel Young are the founding members of the garage band RAG. (Alyssa Laube)

Echo-immersed screams, hard-hitting guitar leads, and stylistic nuance makes RAG one of the more interesting names to emerge from Vancouver’s underground this summer. Formed by guitarist Mila Krajina and drummer Nigel Young—recently joined by bassist Joshua Jiho Silickas—the project marks a creative departure for three of the city’s seasoned rock musicians, all of whom are looking forward to collaborating on something fresh.

“With my old project, a lot of the stuff that I wrote was from years ago when I first started playing, and I was playing more 90s, more grunge,” explains Krajina, former member of grunge-punk band Miss Mudd. “At the time, that’s what I was into, but as soon as I put it into fruition, that wasn’t what I was listening to at all. With this, I would listen to stuff that’s like RAG, and that’s one of my main drives: making shit that I would listen to.”

Young adds that he “wanted to do more punk [and] more shorter and to-the-point songs,” as he rarely gets to do so with his music elsewhere.

Krajina invited Young to jam with her after Miss Mudd’s disbandment left her itching to play new material. Although Young currently plays bass for local psychedelic rock group The Intelligence Service, it wasn’t until his first performance with RAG that he got to show his songwriting to a live audience. His jaunty drumming combined with Krajina’s droning guitar makes for an intriguing backdrop to the duo’s eruptive vocal hooks and raw, reflective lyrics.

Working through difficulties with mental health are central to Young’s lyricism for RAG, while Krajina has expanded her writing to explore not only her internal processes, but also how others see and treat her.

One unreleased song, “The Couch”, only has one line: “Touch me there.”

“It’s about people just kind of being okay with touching you without consent, and it’s angry because it’s like, I’m not always down with that,” she says. “How I get my anger out is writing a song about it.”

Krajina adds that she has been getting “a lot of positive feedback from women especially” since RAG started playing shows.

“Even people who knew me from Miss Mudd are like, ‘You’re doing shit and it’s powerful,’” she says. “I feel like, especially with what’s going on in the world right now, it’s not a woman’s world. I’m not too political, but it’s nice to know that I’m doing something for someone out there because there are a lot of people who might need it.”

“I just like being a part of that,” says Young, with a smile. “I’m just happy when people say the drumming’s okay.”

The two of them share the mic and write alongside Silickas, a member of garage rock band The Rambling Derelicts. Part of what unites the trio is a soft spot for anything that comes across as gritty and genuine while still being fun to dance to. And for RAG, sticking to a genre takes a backseat to occupying that wider niche.

The band’s first two singles, “Shrink” and “Baguna Leach”, were posted online under their Taffy EP at the end of May. While they are relatively cohesive in structure and production, Krajina and Young anticipate that future releases from RAG will offer something different from what listeners have heard so far. Dark vocals contrasted with light instrumentals, including an unrecorded “surfy” track written by Krajina, are likely to be featured on their first record, slated for release before 2020.

RAG will be opening for BB, Monsterwatch, and Dopey’s Robe on Saturday, June 15 at the Clubhouse. They’ll also be playing on July 4 at Static Jupiter with YEP, the Umbrellas, and Bored Decor. To follow them, check out @rag00band on Instagram.