by Braden Klassen and Aly Laube 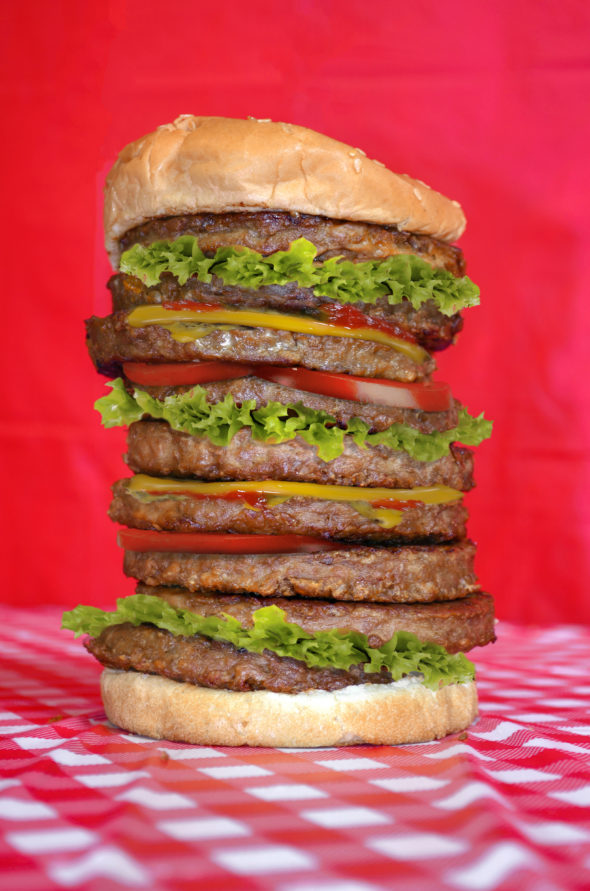 As the western world’s interest in ethical consumerism has grown, so has the popularity of plant-based proteins. A 2017 article published in the Journal of Retailing and Consumer Services found that shoppers have been increasingly factoring ethical concerns into their food purchases, and are becoming more likely to buy organic or locally sourced foods.

One stellar example of this is the Beyond meat burger, a patty that won the hearts of omnivores who had otherwise been reluctant to eat outside of their comfort zone. It attracted consumers with its inventive ingredients and relatively subtle differences in flavour from traditional beef, and provided plant-based eaters with an affordable and accessible fast food option.

The company’s share prices soared after they went public at the beginning of May, and their products are now being sold at several locations across the country.

A press release on Beyond Meat burgers specifically states that it is made using peas, mung bean, and brown rice for protein, beet and pomegranate for colour, and coconut oil and potato starch for texture. The patties are free from GMOs, soy, and gluten, and are kosher. They’re also being distributed at over 30,000 grocery stores and restaurants worldwide, including fast food chains like A&W and Carl’s Jr. and retailers like IGA, Save on Foods, and Whole Foods Market.

Richard Macmillan, organizer from the KPU-based vegan community organization Let’s Be Compassionate, says he eats Beyond Meat burgers “very rarely,” but has plenty of friends who are regular consumers of the product. He suggests that grocery shoppers buy their food from local sources rather than commercial giants like Beyond Meat and its partners.

While he appreciates meat substitutes for normalizing plant-based eating, he also urges Beyond Meat fans to think critically about which industries their money is indirectly supporting.

“If we’re getting it from A&W, which is a restaurant that’s responsible for millions of non-human deaths every year, we should just be aware of that and talk about it. Capitalism is evolving to make money, which is what it’s good at, but there are a lot of animals being killed,” he says. “I like that these options are available, but for my preference, my personal goal would be for more whole foods and less processed options.”

Macmillan also believes that investigating the treatment of workers involved in the production process for Beyond Meat is crucial to understanding whether or not purchasing its products is ethical. One potential way to answer these questions, he explains, is by getting B certification.

“It’s a pretty rigorous label that companies have to go through for the social side, the environmental side, for labour, and they do inspections of the whole supply chain,” he says. “I would be really pleased if Beyond Meat were to go attain that label, or at least mention that they’re working towards it. That shows that they’re at least wanting to improve or to be more transparent.”

Beyond Meat declined The Runner’s request for an interview about how the burgers are sourced, assembled, packaged, and distributed.

Understanding the Environmental Impact of Farming

Evidence shows that increasing the popularity of plant-based diets could also have a measurable impact on decreasing greenhouse gas emissions by reducing the world’s need for the industrial development of animal agriculture and production. The reduction of producing greenhouse gases is an important step to mitigating or preventing some of the processes that are causing global climate change.

Vegetables, fruit, grains, and other crops require less resources to farm than raising cattle, chickens or other livestock, and growing crops is much more efficient in terms of energy input and output. These findings were popularised by a 2003 study published in The American Journal of Clinical Nutrition which included data showing that, on average, it would take 13 kilograms of grain and 30 kilograms of hay to produce one kilogram of beef. As a result, producing beef requires around 100 times more water than producing most crops when you factor in the water cows drink throughout their lifetime, as well as the water used to grow the food the cows eat.

In simple terms of converting energy and resources into protein and other nutrients, cultivating and harvesting plants requires much less energy to produce the same output as farming animals, and the waste that results from farming crops contributes less to greenhouse gas emissions.

“Agriculture is responsible for a disproportionate amount of greenhouse gases,” says Mike Bomford, an instructor in the Sustainable Agriculture and Food Systems program at KPU and a fellow with the Post Carbon Institute based in Oregon.

“Even though it’s a relatively small part of the economy in terms of the dollars that are created, the entire food system accounts for somewhere between a fifth and a third of global greenhouse gas emissions.”

Bomford teaches courses on vegetable production, pest management, agro-ecosystem management, and agriculture and energy, and he has also taught a course on livestock production in conjunction with other faculty members at KPU.

“It’s important to recognize that, in the broader economy, our greenhouse gas emissions are almost entirely due to burning fossil fuels, but in agriculture it’s different,” he says. “In agriculture, greenhouse gases like nitrous oxide and methane [are commonly emitted] because of the way we manage our animals.”

He continues, “So particularly the ruminants—animals with multiple stomachs that are able to digest grass and convert that into protein which is digestible by people—they depend on bacteria in their gut to facilitate that, and the process occurs in an anaerobic, or a low oxygen, environment, and it emits a lot of methane in the process.”

The waste products that result from raising animals, such as manure, also provide an ideal environment for bacteria to develop and flourish, which in turn continues to add to the emission of greenhouse gases. Oftentimes the animal waste is moved off-site to other areas like ponds and lagoons where it is left to decompose, increasing the timeline during which bacteria can develop, and contaminating or destabilizing local ecosystems.

Like almost every other industry, agricultural production relies on fossil fuels to provide energy for things like food transportation and farming machinery. But the amount of greenhouse gases emitted in these processes may have less of an environmental impact than other aspects of food production, such as  keeping livestock.

Often, greenhouse gas emissions are measured and referred to by their carbon dioxide equivalent, or “CO2e.” If a mixture of gasses contains chemicals like methane, carbon monoxide, or nitrous oxide, scientists and statisticians will convert it all into a standard set by carbon dioxide.

The properties of these gases that cause them to absorb, reflect, and emit energy like heat determine how much they perpetuate warming. The tendency for the gas to remain in the atmosphere is also taken into account, and all of these aspects are combined and measured in order to calculate the gas’s Global Warming Potential, or GWP, which measures its impact over a timeline of 100 years.

As gases absorb and emit heat, they trap that heat in the atmosphere, which results in the warming effect that is continuing to increase all over the planet. This is why, in comparison to emissions released by burning fossil fuels, emissions caused by agriculture—especially animal agriculture—can contribute to warming on such a large scale, even though it occurs in smaller amounts.

“The whole greenhouse gas picture is very, very different in agriculture from the rest of the economy, and a lot of it has to do with the way that we manage livestock production,” Bomford adds. “If we can move away from depending on livestock and animal products and towards a more plant-based diet, it really offers a lot of opportunities for us to be able to reduce our greenhouse gas emissions.”