Time is Running Out to Address Canada’s Changing Climate 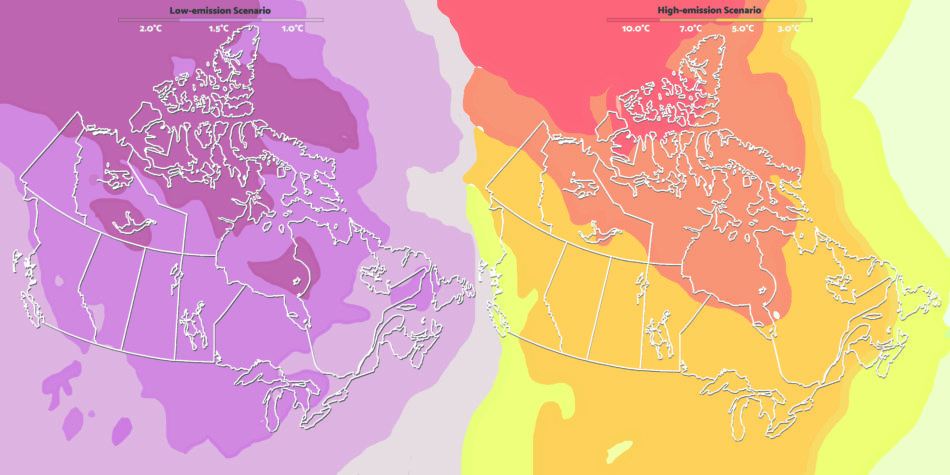 A report titled Canada’s Changing Climate Report released by Environment and Climate Change Canada has found that the climate in Canada is warming twice as fast as the global average. In addition, temperature increases are occurring even faster in areas of Northern B.C., the Prairies, and the Territories, and these changes are already beginning to manifest as variations in precipitation levels, higher climate extremes, and changes to freshwater availability and ocean ecosystems.

The report, which was published on April 1, says that the country’s average annual temperature has risen by 1.7°C since 1948, which is when country-wide records of temperature became available.

For decades, climate scientists have determined that an increase in global temperature exceeding 2°C will result in changes to local climates that could catastrophically affect our day-to-day lives. In Canada, this means damage to ecological systems that support industries like forestry and food production. It also means a reduction of wildlife habitats and native species, which could further affect human lives in unpredictable and detrimental ways.

“Canada’s climate will warm further, with warming projected in all seasons,” the report reads

The 442-page document represents a massive collaboration between climate scientists and data scientists across Canada, allowing for predictions to be made for the entire country rather than focusing on localized areas.

“The rate and magnitude of climate change under high versus low emission scenarios project two very different futures for Canada,’ it explains. “Scenarios with large and rapid warming illustrate the profound effects on Canadian climate of continued growth in greenhouse gas emissions. Scenarios with limited warming will only occur if Canada and the rest of the world reduce carbon emissions to near zero early in the second half of the century and reduce emissions of other greenhouse gases substantially.”

Dr. Kent Mullinix, Director, Institute for Sustainable Food Systems at KPU, says that climate change is deeply related to the ways in which we produce and consume food, and that moving towards a more sustainable model of production is critical for addressing emissions reduction.

“Agriculture is one of the most significant contributors to anthropogenic greenhouse gas emissions, estimated at about 10 per cent globally, and the food system as a whole might be as much as 50 per cent, so our food system can play a tremendous role in mitigating climate change, and it should,” he says.

He adds that “sustainable agriculture involves greater diversity on farms, and systems that involve crop and animal production in an ecologically sound and functional relationship.” Humans moved away from these systems in favour of supporting economic growth, he explains.

“For every unit of energy we put into cultivating plants, we got about two and a half units of food energy out of it. And now for every unit of energy we put into growing crops or producing food, it takes about five units of energy. Some of the food we eat takes 50 units of energy, so [something] like hamburger takes a lot of energy to produce and put on your plate,” he explains. “That energy comes from oil primarily in the form of fuels to run machinery and fuels to process food, and pesticides and fertilizers.”

Because of this, he says, “our agricultural food system represents an energy drain instead of an energy gain.”

Mullinix worries that we will be unable to make the changes required to mitigate the effects that climate change will have on food production in Canada. He also predicts that one of the ways Canadian farmers will attempt to deal with the changes is to experiment with growing different crops, but that this is mostly uncharted territory, and that researching solutions will require more funding than what the government is currently dedicating to solving the problem.

“We’re going to try to develop different methods for growing that are [better] adapted to the changing climatic and environmental regime, but how well that’s going to go over remains to be seen,” he says. “You can get short season crops and get them in the ground, but if you don’t have any water during the growing season to irrigate them, then what are you going to do?”

Mullinix sees the future with a steadily warming climate as nearly apocalyptic, describing it as “a hell on earth” burdened by resource scarcity and subsequent conflict.

Since signing the Kyoto Protocol in 1997, the Canadian government has repeatedly made promises to mitigate the impact of climate change by reducing total emissions by six per cent before the end of 2012. In 2011, under the Harper government, Canada became the first signatory to withdraw from the Kyoto Protocol after a UN report found that Canada’s emissions had actually risen by 24 per cent between 1980 and 2008. Since then, Canada’s greenhouse gas emissions have continued to rise in spite of the Trudeau government’s commitment to reducing them during the Paris Agreement in 2015.

For its part, B.C. has been trying to advance policies that will curb the effects of climate change over the past couple of decades.

According to Ellen Pond, Chair of the Policy Studies program at KPU, “B.C. as a province has been an early leader on climate change.”

In late 2018, the B.C. government introduced CleanBC, a plan to reduce emissions though efforts like cutting back on fossil-fuel reliant transportation, improving green building design, encouraging clean industry, diminishing waste production, and implementing accountability measures for tracking the progress made on emissions reduction. B.C. has also imposed a tax on carbon emissions since 2008, which increased from $10 per tonne in 2008 to $35 per tonne in 2018. The plan is to continue to increase the cost by $5 per year until it reaches the price of $50 per tonne in 2021.

In 2018, the Canadian Senate passed the Greenhouse Gas Pollution Pricing Act, which will charge greenhouse gas emitters $20 per tonne starting in 2019, rising to $50 per tonne in 2022.

Provincial governments in Alberta and Ontario have publicly opposed implementing policy changes like carbon taxes, questioning their effectiveness at reducing emissions and saying that they will unfairly transfer costs to consumers.

“We need to stop treating climate policy as a partisan issue and we need to be working across party lines to deal with it,” says Pond. “In the past, carbon-pricing was originally proposed by a conservative government. In the past, we had leadership from conservative parties on this issue, and I would hope that, in the future, we will see leadership instead of what we’re seeing now which is making it a partisan wedge issue in an election. We don’t need that. We need urgent action and we need to explore a full range of policy tools, and carbon pricing is one of them.”

In January, Vancouver City Council unanimously passed a motion to declare a climate emergency in an effort to bring attention and a sense of urgency to recommended policies that aim to render the city carbon neutral by 2050.

This follows a similar declaration of a state of emergency by the provincial government in response to record-setting wildfires in 2018. Many communities across Canada, including those in Ottawa and Halifax, have declared similar climate emergencies.

While Pond acknowledges the intention behind these statements, she notes that follow-through is even more crucial.

“If you only declare an emergency and don’t follow through with spending and resources and capacity-building and a commitment to real change and understanding the urgency and the scope of the problem, then declaring a climate emergency is less useful,” she says. “It becomes more of an image-conscious choice.”

KPU programs like Environmental Protection Technology (EPT) and Urban Ecosystems strive to help prepare students to work towards dealing with the effects of climate change both locally and in provincial and federal policymaking.

“It’s a very science-based program,” says Erin Pedersen, a graduate of the EPT program who works as the sustainability coordinator for the Kwantlen Student Association.

“In terms of adaptation, [students learn about] things like flood mitigation, for example, and some people from EPT may go on to work for municipalities in that area,” she says. “On the other hand, there’s the sort of the mitigation aspect, like how we can reduce our emissions enough to get to that more stable scenario where we keep [the rise of global temperature] below 2°C.”

While Canada’s Changing Climate Report depicts Canada’s climate as subject to unprecedented turmoil in the future, Pedersen says there is still hope that changes can be made to avoid the most severe effects.

“There have been several reports like this and the Intergovernmental Panel on Climate Change report that the news media have sort of taken and said, ‘We’re doomed.’ That’s just not an effective message for the public,” she says. “We don’t want people to just give up, because that’s a terrible choice. I’m glad that the report exists and I think it’s important information, but I just really hope that the result in the popular view is not to despair.”