Competitive eaters across Canada are few and far between, but share a taste for being the best 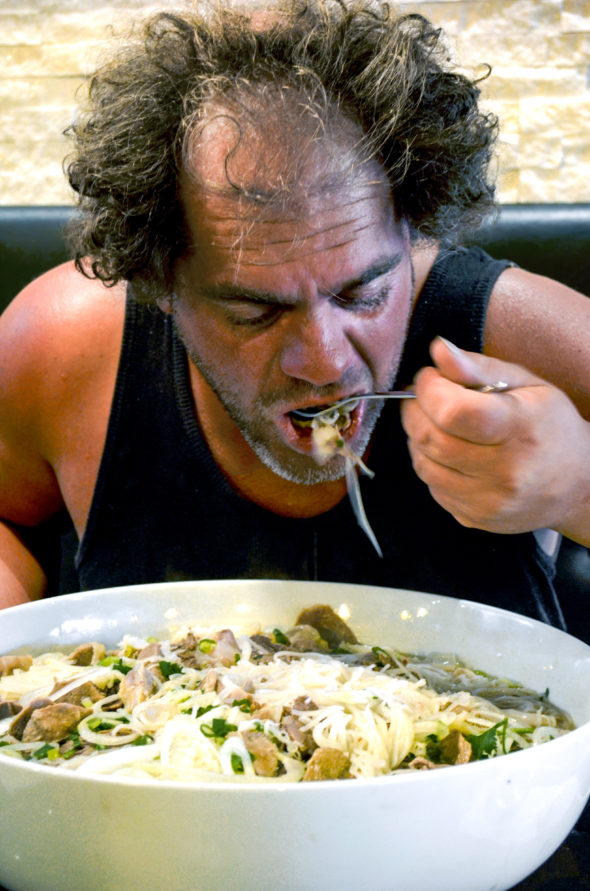 Step Daddy J, one of only a handful of serious competitive eaters across the country. (Kristen Frier)

I like noodles quite a bit. I would go so far as to say that noodles are probably the food that I’ve consumed the most, aside from Cheetos and mayonnaise (not at the same time). On September 9, I watched a man named Step Daddy J try to take down the biggest bowl of noodles I’ve ever seen. This phở was enormous. It looked like the amount of noodles I’ve eaten throughout my 20 years of life all in one huge, scary place.

What The Phở in Newton offers the “Souper Bowl” challenge. It’s four litres of broth, four pounds of meat, and four pounds of noodles. If you finish it in under 90 minutes, it’s free. But trust me, you’re not getting it for free.

According to numerous medical and biology journals, the human stomach can hold, on average, a maximum of four litres of liquid. That’s just the broth.

“When I was young, my mother—she’s from Kiev, Ukraine—she used to force feed me,” says J. “I think the Eastern Europeans moms, they want you to be full. In their way, they think that if you eat a lot of food, you’re healthier.”

Even Step Daddy J, one of only a handful of serious competitive eaters across the country, got about halfway through before stopping.

He started with the meat. What The Phở puts a bit of every kind of meat they offer in the Souper Bowl so a challenger doesn’t get sick of just one. Step Daddy J ate four pounds of meat in approximately 18 minutes. Following that, he tossed back a significant amount of noodles and broth. According to J, the first 20 minutes are the easiest. This is a brief and important window of time when your brain doesn’t know just how full you are, a phenomenon caused by a natural delay in the process of your digestive tract telling your brain that your stomach is at capacity.

“Even Joey Chestnut would struggle with this challenge,” says J.

Joey Chestnut is an American competitive eater—currently ranked number one in the world by Major League Eating. He recently won a hot dog eating contest hosted by Nathan’s Famous Hot Dogs in Coney Island on the fourth of July, perhaps the most famous eating contest in the world. Joey Chestnut won the competition for the twelfth time this year by munching an astounding 71 hotdogs. He was just shy of beating his own record of eating 74 hot dogs, which he did in 2018.

Chestnut is a shining example of someone who made a career out of eating, but the reality is that most competitive eaters don’t make a living through this sport, especially in Canada, where it gets little recognition.

Despite popular belief, competitive eaters don’t see themselves as indulgent. It’s not an activity that involves savouring the food in any way. In an article published by The Huffington Post, former KPU student Ryan Reynolds called competitive eating an example of western gluttony and “grotesque displays of boundless, unapologetic shitheadery.”

The USA has historically struggled with obesity problems, and the normalization of unhealthy eating habits could be a factor in the “gluttony” of western life. However, many successful competitive eaters are quite fit and healthy.

“Because of [the competitions,] I often choose to eat even healthier than I would otherwise,” says Joel Hanson, a competitive eater from Nova Scotia who balances finishing food challenges with professional modelling.

The key to this, according to Hanson, is eating as healthy as possible on regular days, considering competitions “cheat days,” and maintaining a rigorous workout routine.

On the surface, eating may not look like a sport. There is no running involved, no ball, no specific uniform, but there’s no shortage of sweat—meat sweats, specifically. There are also some surprising training methods involved.

“I think people kind of overthink things and they try to target the wrong areas. I’ve been asked before about speed chewing … that’s not even a thing,” says Hanson. “I think any individual off the street has the appropriate speed to chew even compared to the elite competitive eaters. There are things like jaw fatigue and jaw strength and jaw endurance which would be more of an accurate factor.”

Many eaters are known to drink massive amounts of water or milk in the days leading up to a challenge to stretch out their stomachs. Drinking too much water can cause water intoxication from diluting the electrolytes in your blood, which can be fatal.

No sport is 100 per cent safe, and excessive eating is no exception. If you ever try to shove 71 hotdogs down your throat, the first dangerous thing you will encounter is the risk of choking. Sadly, people have died of asphyxiation during competitions because of a lack of medical professionals on location.

Vomiting, known in the competitive eating world as a “reversal of fortune,” will get you disqualified if you do it on the clock. If a competitor habitually vomits after a session of binge eating, their stomach acid could also do harm to their esophagus and teeth.

Say you don’t suffer a “reversal of fortune.” Now you have 71 hotdogs in your stomach. Again, nobody wants to digest that many hotdogs. At this point a lot can go wrong, whether it be stomach perforations, acid reflux, or just a really, really unpleasant evening spent with your old buddy Porcelain John.

“If you eat so much food in such a short period of time, you may feel uncomfortably full, sick to their stomach, may experience bloating, nausea [and] acid reflux, because your stomach will be working really hard. That will also cause cramping, heartburn, and diarrhea,” says Amy Yiu, a KPU Academic Advisor and registered dietician.

“Usually the foods they have to eat a lot of calories, fat, carbohydrates, and sugar, so it will cause the body to use more energy to digest the food which will result in lower energy,” she says.

If you aspire to be a professional gurgitator, there are some techniques that you may need to master:

“Chipmunking” is a common technique among professionals. This entails stuffing your cheeks with food in the last few seconds of a contest. Any food that is in your mouth counts as eaten so long as you can swallow it within 30 seconds of a timer going off in certain situations.

Another technique is dipping food in water to soften it thus removing some of the need to chew and simultaneously lubing it up for consumption.

There is also the classic “Solomon Method,” coined by Takeru Kobayashi. This method involves breaking a hot dog in half and shoving both halves in your mouth at the same time to minimize the amount of chewing needed.

It is also common to see eaters jumping to use gravity to force things down their throat or plugging their noses and blowing (as though they are popping their ears) which increases thoracic pressure and pushes food down their esophagus.

All in all, competitive eating is not for the faint of stomach. There is very little sense of community surrounding this niche is Canada, because those who can fare it are few and far between.

“Competitive eating is one person against everybody,” says Step Daddy J, adding that it’s hard to have a sense of camaraderie between eaters because it’s “too competitive.”

On the other hand, Joel Hanson’s advice to anyone interested in competitive eating is simple: “Don’t do it.”

“What people don’t realize is that the vast majority of these contests are not enjoyable,” he says.

“Ask a marathon runner three hours into a marathon, ‘Are you having fun?’ They’re gonna say, ‘Hell no!’ But they enjoy the achievement afterwards”