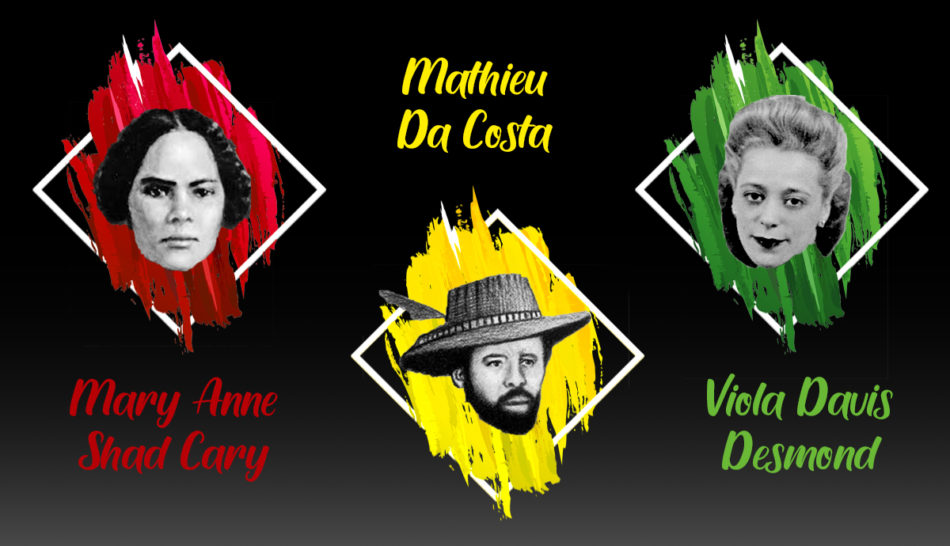 According to Historica Canada, the first named Black person to set foot on Canadian soil was Mathieu Da Costa, a translator hired by European explorers to communicate with Indigenous people in 1605. Fourteen years later, the first ship of African slaves to reach British North America docked in what is now Jamestown, Ontario, and systemic slavery continued until 1834 — nearly 230 years — when British Parliament’s Slavery Abolition Act reached the colony.

People like Viola Davis Desmond (made famous by her activism in white-only designated spaces), Lincoln Alexander (the first Black member of Parliament in Canadian history), and Mary Ann Shad Cary (the first woman to become a publisher in Canada, a teacher of the children of former slaves, and an advocate for women’s suffrage) should not be forgotten.

We like to separate ourselves from the Americans, but similarly to our neighbours down south, Canada is divided on racial equality. Look to the ‘90s, when a race riot broke out between 50 students in a Nova Scotia high school, spurring the creation of a government fund for anti-racist initiatives in education. The next year, Toronto saw the Yonge Street Uprising, Canada’s largest response to the acquittal of police officers in the Rodney King case in Los Angeles. This sort of activity continues today, albeit on smaller scales.

Canada has a history of gentrifying and demolishing Black neighbourhoods and cultural hubs as well. In Vancouver, Hogan’s Alley was once a bustling community to the city’s Black population. It existed from the early twentieth century until 1984, when it was destroyed to make way for the Georgia Viaduct.

Now, the city is reversing that process by demolishing the viaduct to “rebuild” another Hogan’s Alley — what the project’s planners described to Daily Hive as an “opportunity to redress a moment in history.” To learn more about what Hogan’s Alley used to be like, check out the interactive app Circa 1948 on the National Film Board of Canada’s website.

Remembering is great, and learning is better, but what’s best is applying that knowledge as action. Black activists, educators, and organizers are holding events around town for the remainder of the month. Here are some to check out if you’re interested.

On Feb. 20, Afro Van Connect’s Black Love Series will be taking place at Carnegie Community Centre. Designed for Black attendees, the series focuses on portrayals of “self-love and the importance of … ancestral connections,” among other subjects, through hip hop and spoken word. Another event in the series, “Healing with Food,” described on AVC’s website as “a discussion on the healing properties of eating seasonal and ancestral foods led by Dr. Dorian Holmes,” is being held the following day at 808 Richards Street.

On Feb. 22, Vancouver’s 19th annual Black History Market & Cultural Showcase will be happening at the Royal Canadian Legion on Commercial Drive. That morning, the 6th annual Black Strathcona Heritage Walking Tour (which will take you through where Hogan’s Alley used to be) will lead pedestrians to historic sites, buildings, streets, and businesses once owned by people of African descent as part of a discussion about urban development and culture. That same afternoon, writer, activist, and historian Blair Imani will be speaking at Massey Books about the diverse histories of Black Canadians.

Roxane Gay, a best-selling author, cultural critic, and host of the Hear to Slay podcast will be speaking at UBC for the Thinking While Black Series on Feb. 25. And on Feb. 27, athlete, educator, and activist Valerie Jerome will share “her family’s record of triumphs and frustrations in the context of systemic racism,” from her perspective as the sister of Harry Jerome, who held the title of the “fastest man alive” in the ‘60s.

The last two days of February are packed as well. On Feb. 28, you can see “The Beauty of Being Black” at SFU or “Status of Black History Month Today” at the Brighouse Library in Richmond. End the month with a bang on the 29th with Black Lives Matter Vancouver’s Black Futures Gala at Beaumont Studios or or a Celebration of Martin Luther King at the Chan Centre for Performing Arts.

These are only a few of the events going down before March, so keep looking and learning. I hope you all have an inspiring and enlightening Black History Month.