While it doesn’t seem like KPU has been greatly affected, its surrounding communities are speaking up 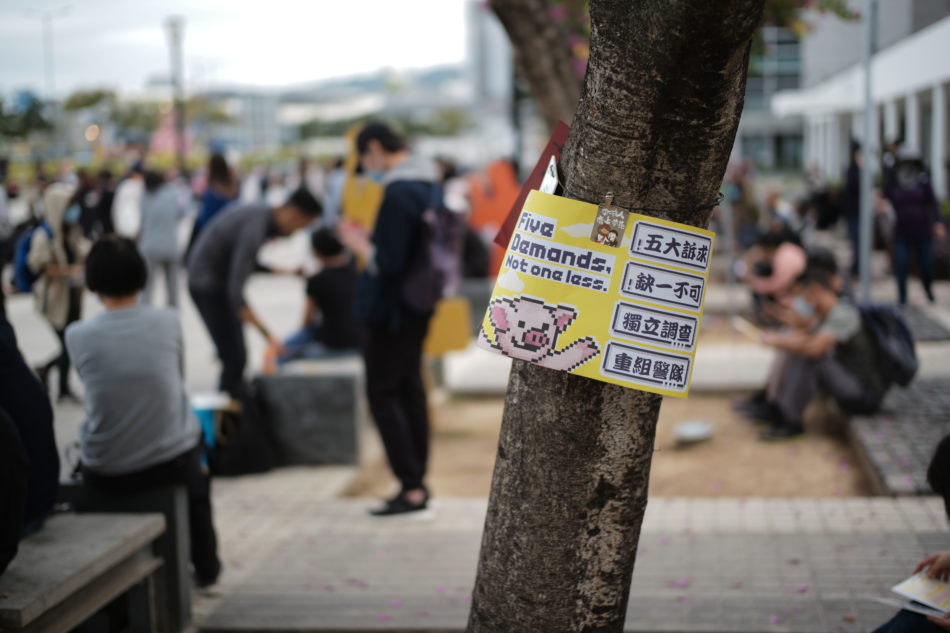 The Hong Kong protests, while leaderless, are propelled by the efforts of students. This protest flyer features LIHKG pig, one of the many mascots of the protest movement.(Tristan Johnston)

As the Hong Kong protests continue, tension can be felt in Metro Vancouver, a city many Chinese-Canadians call home.

Last August, a Lennon Wall at SFU was vandalized, causing the Simon Fraser Student Society to vote on establishing a mobile Lennon Wall. Lennon Walls exist as public displays so that people can post their democratic wishes for Hong Kong.

But the tensions don’t seem to be as high at KPU.

“As far as I know, there haven’t been tensions on campus or any that have been reported to me,” says David Piraquive, President of the KSA.

He later confirmed via email that no perceivable response to recent events in Hong Kong has been documented at KPU so far.

Dr. Ross Pink, a political science instructor at the university, said there was one situation that seemed to indicate student interest in the protests. In his international relations course, a pro-democracy student gave a presentation on Beijing’s alleged influence via agent provocateurs in the Hong Kong protests, which a pro-government student “pushed back” against. While Pink wouldn’t classify it as an argument, he did find it notable.

“It hasn’t come on my radar except in my one class that I taught last semester,” he says.

In the City of Richmond, some Hong Kong-related political activity and conflict still takes place from time to time.

Kenny Chiu, Conservative MP for Steveston-Richmond East, says he is “very concerned” about this kind of activity.

“One of the characteristics of our beloved country is that we respect people of other opinions,” he says. “Joe Peschisolido, the MP who I helped get elected in 2000, whom I defeated in 2019, I went to him and shook his hand and thanked him for his service to the people of Richmond.”

Chiu says he would like to see more formalized and publicly organized debates where those on both sides of the argument can delineate, present evidence and make arguments, or set up their own Lennon Walls.

He’s also worried that protestors and their supporters are self-censoring in fear of being branded as “anti-China.”

“It’s pretty obvious that the government, controlled by the Chinese Communist Party, has started to use ethnicity as a weapon,” says Chiu. “Anyone who criticises the Chinese government, it’s seen as akin to hating Chinese.”

He says the People’s Republic of China has conflated the idea of the Communist Party with Han Chinese ethnicity.

“They don’t understand. What if I love my ancestry so much that I want those people in China to have the same high level of democracy and freedom that I am enjoying today?” he asks. “People need to be educated. They need an open discussion for them to have the ‘A-ha!’ moment.”