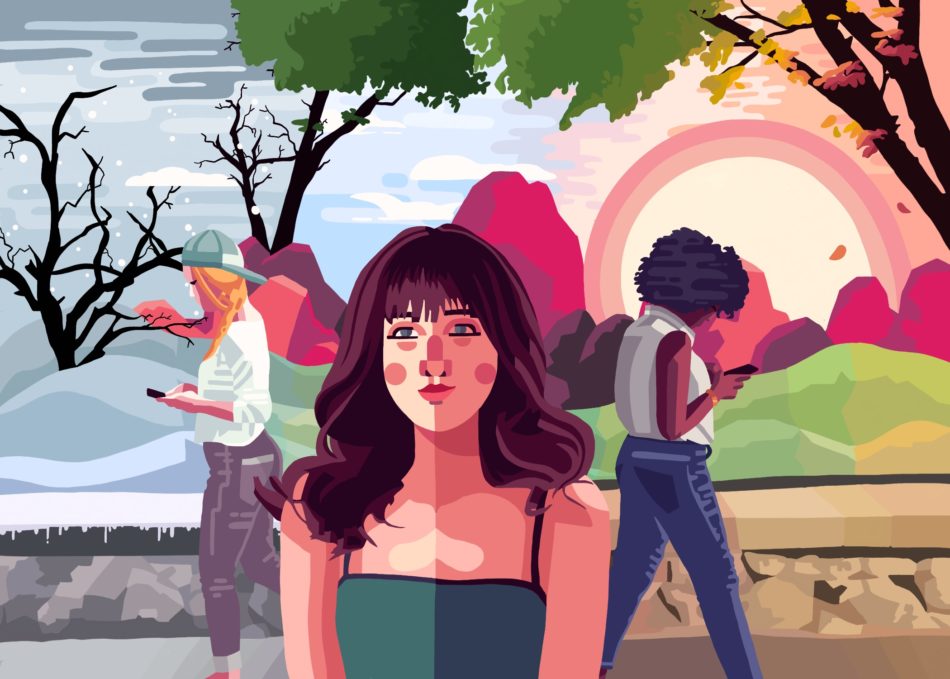 Moments before we ushered in a new decade, I was scrolling through an old crush’s tweets, re-reading each one carefully, knowing I was letting them, and perhaps him, go in the new year. My New Year’s resolution was this: No more social media in 2020, and at least for January, no music, podcasts, or YouTube either.

At the time of writing this, it is now Jan. 30, and this is a record of how I am doing so far.

Prior to New Year’s Day, I deleted my Instagram account. I wiped all resolution-related apps, including Spotify, off my phone. I unfollowed everybody on Twitter, even my closest friends, and changed the default language to Japanese. I knew I’d be dropping by occasionally to check on my BTS (as in the boy band) bookclub (yes, really) group chat, so I was setting things up to make it as difficult as possible to be lured away.

Facebook? Easy. I only used Messenger anyway, and that was allowed to stay for two reasons. One, I don’t make Drake money, so texting my faraway friends without wi-fi is not an option. Two, giving out your phone number for group projects is a relic of the 2010s.

You would think that eliminating so much noise from a person’s life would leave more space for serenity. But for the first week, I was angry. Not all the time, and not only angry, but I felt like a simmering pot. Streams of emotion — happiness, gratitude, nervousness, rage — rose up to my surface and back down again. I fought with two people that I loved. Even though I was no longer overwhelmed by the never-ending news online, on Jan. 4 I fumed about the societal expectation for women to be hairless, how colonization had resulted in English being my primary language, the judgement I felt from my culture about how I should dress, and my own sense of vanity.

Another expectation of mine had been that, by suddenly abandoning so much of my internet playground, I would be rewarded with more time to do the things that I love — to write for hours, read for pleasure, and volunteer more. In reality, this is my first full-time semester at university in years, and I’m shocked by how little time each of us possesses in the first place. I completed a 14-day sleep health meditation course earlier this month, and I’m still working out a consistent sleep routine. I offered up my services as a grant writer to a charity that inspired me, and after two weeks I had to reduce my workload. It snowed, and for the fourth (fifth?) year in a row, I didn’t build a snowman.

From a stranger’s perspective, it may seem like this New Year’s resolution isn’t as magical as it first appeared to be. But actually, instead of going easier in February, I’m tightening up my restrictions. Today I deleted my YouTube, Tumblr, and Spotify accounts point-blank. I plan on not using the internet unless it’s for work or to answer a specific question. Later on in the year, I want to find two weeks to be off the web completely.

As busy as I still am, and as stressed as I still can be, being off of social media has given me an awareness of my life as it unfolds. I remember January as having a beginning, middle, and end. I’m more perceptive of how I’m feeling, and since I’m not repeatedly pacifying myself with my phone, I’ve become a better problem solver.

When I go to bed, I go to sleep. I found six hours to thoroughly clean out my closet, and four for the rest of my room. I went out to socialize at least nine times this month, which has desperately made me want to be a homebody in February. One evening I felt the urge to start running again, and the next morning, I did.

I’m not saying that doing what I am doing is something everybody should experience. But I do believe that it is important to have some quiet in your life, and retreating from the virtual world is one way to experience that quiet. One month down, 11 to go.