Solidarity Blockades Spread Across Vancouver After Arrests Made at Gidimt'en Checkpoint 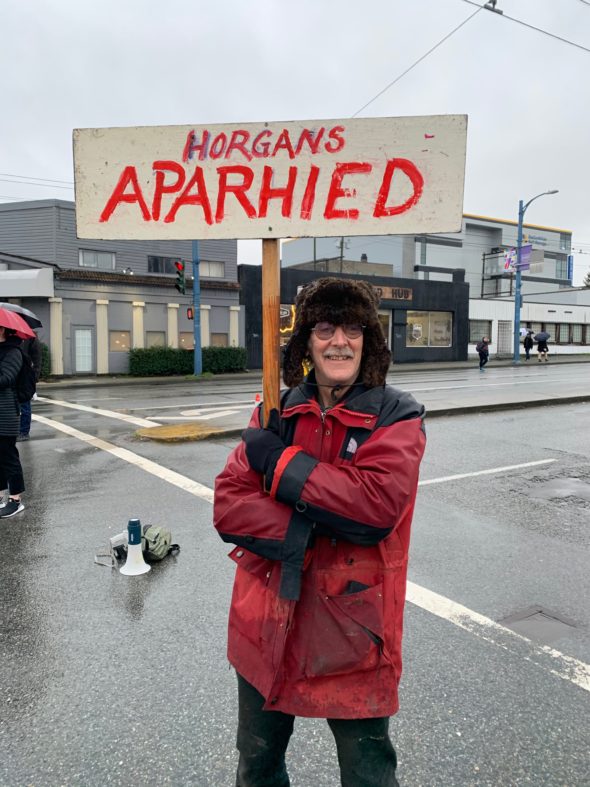 In the early hours of Feb. 6, armed Royal Canadian Mounted Police moved in on the Gidimt’en Checkpoint in Wet’suwet’en territory, forcefully removing peaceful protesters from their unceded territory.

Wet’suwet’en hereditary chiefs and their supporters are defending their land in an ongoing conflict with TransCanada. This company wants to build the Coastal GasLink pipeline that would run through Wet’suwet’en territory, therefore damaging the natural environment.

Arrests were made between 4:00 and 5:00 am. Six people were taken into custody, and the camp was disassembled. Journalists were forced to leave the area.

“The RCMP’s ultimatum, to allow TransCanada access to unceded Wet’suwet’en territory or face police invasion, is an act of war. Despite the lip service given to ‘Truth and Reconciliation’, Canada is now attempting to do what it has always done – criminalize and use violence against indigenous people so that their unceded homelands can be exploited for profit,” reads the Unist’ot’en website.

In response to this, members of the public formed their own protests across Canada. Protesters gathered at the intersection of East Hastings and Clark, where they stood in solidarity with the Wet’suwet’en people defending their land. In a circle, protesters gathered and stood with signs, chanting, “Coastal gas, frack off. RCMP, back off.”

The cold day and rainy conditions didn’t dampen their spirits as protesters blocked the intersection.

“It is a fossil fuel project. It will contribute to climate change, and that’s a problem for all of us,” says Jim Champion, who was at the protest. “We’re here in solidarity for those who are Indigenous people in Canada as well as problems that [affect] all of us.”

Jessica Adamson stood under a pop-up tent where supporters bring food and warm drinks to keep the crowd’s energy up. Adamson has lived in Vancouver her whole life but is from the St’at’imc Nation near Lillooet, B.C.

“It’s a miserable day out, but it’s heartening to see there is this kind of support,” says Adamson. “But at the same time, a car tried to run into us, and the cops stood by and let it happen. He sped up… and almost hit a kid.”

Herb Varley has been an organizer and activist for a decade in the Vancouver area.

“Today it would be very easy to feel disheartened, but counterintuitively I’m actually feeling pretty good. I think that’s partly because there are so many supporters here and people I don’t even know. It’s good to see the support,” says Varley.

Through hours of protesting, allies stood in the cold, singing, chanting, and drumming.

“It’s easy as an Indigenous organizer … to feel that I’m super isolated, and it would be easy for the Wet’suwet’en to feel super isolated, because they literally are geographically isolated, so to have people here standing in a circle — it reminds us that we are not as isolated as we are compelled to believe, and we’re strong when we’re together,” says Varley.

Dozens of groups have since formed their own protests and shown support across Canada. In Victoria, B.C.’s legislature buildings dozens of Wet’suwet’en supporters blocked the entrance, preventing MLAs from entering the building and delaying the throne speech which was planned for that day.

Rallies have been ongoing throughout the week since the arrests on Wet’suwet’en territory. In B.C., Alberta, Saskatchewan, Manitoba, Quebec and Nova Scotia blockades have been maintained, stating in a news release, “until RCMP stand down, the demands of the hereditary leadership of the Wet’suwet’en peoples is respected, and all land defenders are released and cleared of all charges”.