Nineteen people were elected by 1,469 students this week 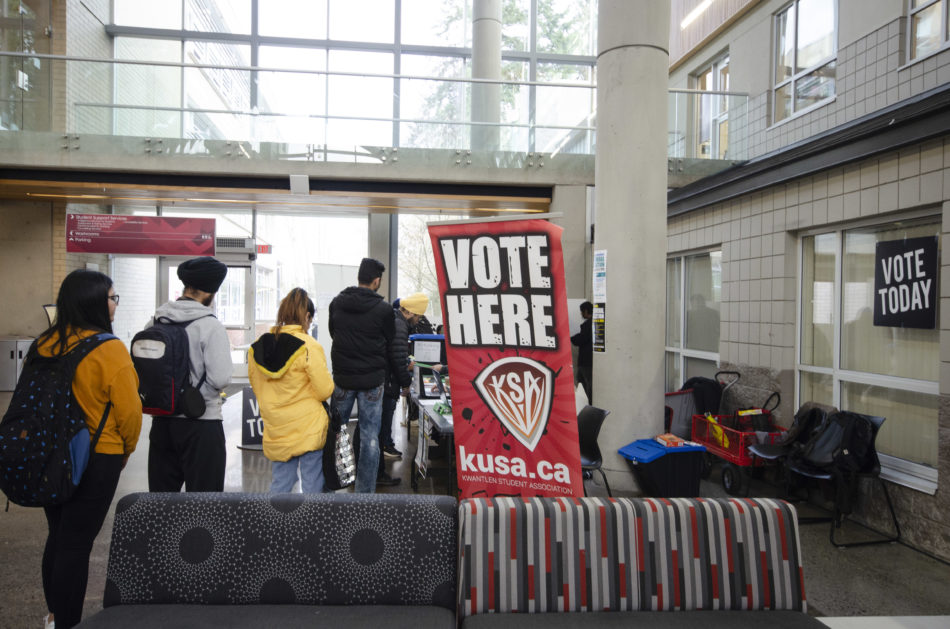 Students line up in the Surrey Main building waiting to vote for the 2020 KSA Council. (Braden Klassen)

Nineteen new members will be joining the Kwantlen Student Association’s Council, three of whom were re-elected, after voters cast their ballots on Feb. 11 and 12.

Seven candidates ran for the Arts Representative position. Of those seven, Harmandeep Kaur was elected with 106 votes, Sukhpreet Kaur with 154, and Paramjit Singh with 94. Singh was absent for nine out of 11 council meetings last year, and phoned in for the two he was “present” for.

Four candidates ran for the position of Science and Horticulture representative, but only one was elected: Ripunjot Kaur (Jaani) Brar with 97 votes. Armandeep Kaur and Prabjot Singh Maan both tied with 92 votes. Saman Sandhu followed with 85 votes.

There were 12 candidates running for the Business Representative position, five of whom were elected. Sukmandeep Singh Gill was elected with 501 votes, Harman Maan with 261, Kunal Puri with 472, Kiranjeet Kaur Sindhu with 305 votes, and Ravinder Pal (Rubal) Singh with 497.

“All of my classes are in Civic Plaza, from day one. My classes were never in Richmond, never in Surrey, so I am kind of attached to Civic Plaza,” says Patel. “It’s like my second home.”

She says she wants students from Civic Plaza to know more about the KSA and the services they provide.

“I was super happy when I got the news in the morning. It was like five. I couldn’t sleep all night because I was like, ‘When is it going to come?’” she says. “It was really an indescribable feeling for me.”

Jeremy Law was re-elected as Cloverdale’s KPU Tech Representative, with 433 students voting “yes” and 150 voting “no.” However, the official election results show that only 11 students voted at that campus.

“It’s amazing that students did want me. I just feel so honoured and humbled by the results,” says Law. “A lot of time, I feel like students don’t know what the KSA is. I think that’s in combination with letting students know what services we have.”

Law says that all of the elected members including him need to work together to address any problems that arise.

The referendum to approve a fee increase to expand services for the KSA Peer Support Program did not pass, with 279 “yes” votes, and 816 “no” votes.

The new Queer Students Representative is Marika Wagner, who got 102 votes.

“I feel proud. I feel honoured to be part of and elected member of the queer constituency,” says Wagner.

The new Women’s Representative is Simranjit Kaur Dhaliwal, who ran unopposed and received  460 “yes” and 30 “no” votes.