A KPU artist reflects on the theft of months of hard work, hoping it can inspire positive change on campus 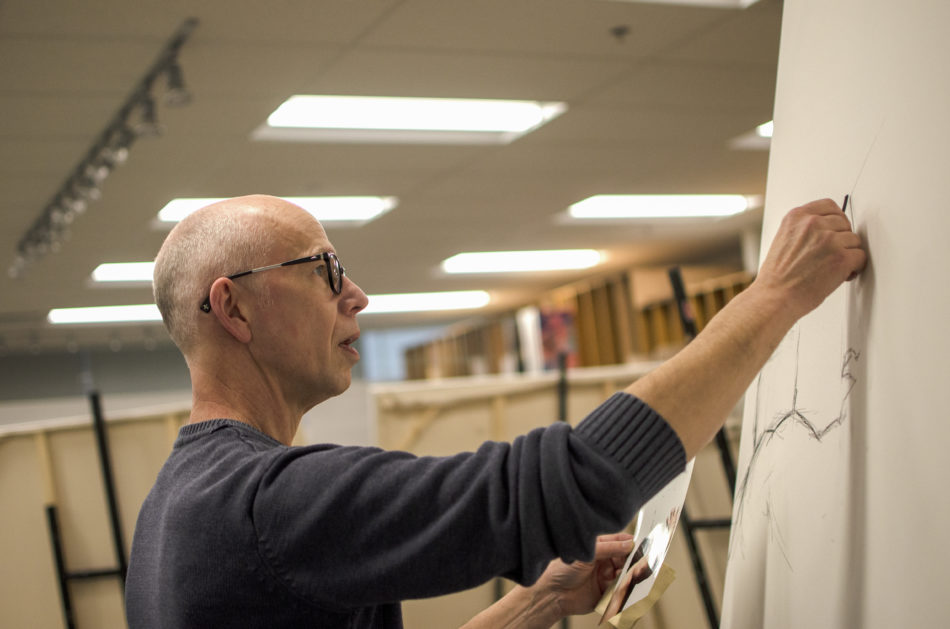 After enrolling in a painting course at KPU during the 2019 fall semester, Julian Dix finished his semester with 13 completed works of art. Seven of these paintings were part of a series he titled Love, Loss, and Hope, exploring his state of mind following the loss of his wife to cancer. He estimates that he must have put over 150 hours of work into the paintings.

On Friday December 13, it took two people just a few minutes to take them from the painting studio, load them up into their car, and drive away. 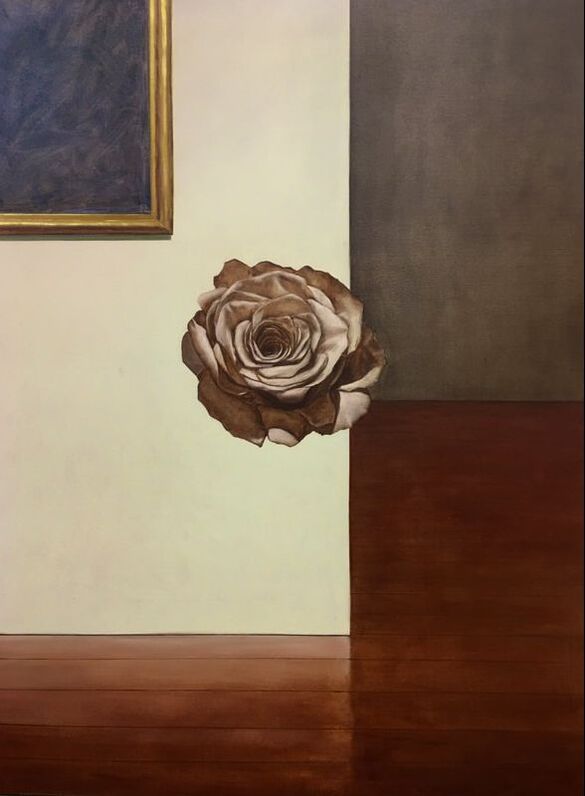 The paintings were stored in a series of racks in the painting studio on the second floor of Spruce building on the Surrey campus. The room itself, like the rest of the fine arts section of the building, is not guarded by security cameras like the building’s exterior and the outdoor areas of campus.

“Then there was that overwhelming feeling of loss and that nagging feeling of wondering, ‘Who? And why?’ If they’d known the story, they wouldn’t have taken them,” he says.

Both KPU security and the Surrey RCMP have been unable to use footage as evidence to determine who took the paintings, and who took them is still unknown. Dix was told that the footage of the theft was determined to be inconclusive and therefore could not be used to identify suspects.

Two of the paintings had yet to be completed, and one was left behind, a piece which Dix had rolled up after removing it from stretcher bars.

He says that security camera footage showed two individuals pulling up in a white station wagon, making a few short trips in and out of the building as they carried out 13 paintings — all works by Dix — and loaded them into their vehicle before leaving. They were recorded on Dec. 13 around 8:00 am, but because of the holidays, Dix believes that there was a delay in accessing and reviewing the recordings.

Some of the paintings form part of the series which, in some ways, portray his feelings about the experience of his wife passing away to cancer in 2019.

“I lost her almost a year ago,” he says. “It had been a real hell of a two years. A lot of work. A very, very hard two years. During those two years though, it was probably the best thing I’ve ever done in my life, to care for her, to finally be doing something noble, finally do something real and valuable.” 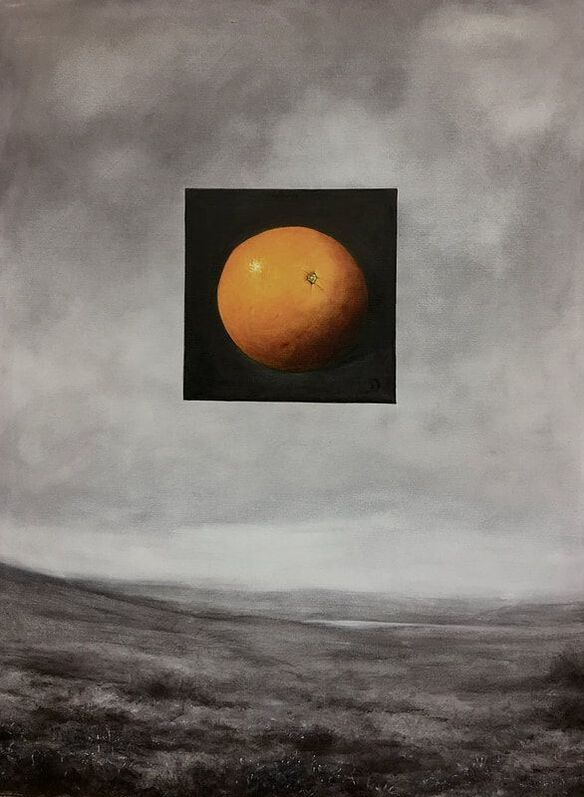 Four of the paintings in Love, Loss, and Hope explore themes of isolation and strangeness, with backgrounds composed in dark and muted greys and browns. But contrasting and delicate elements of optimism and hope also present themselves in the paintings: a shaft of light from an open window, a pale rose in full bloom, an ascending sunrise over a forested valley.

For Dix, painting is a pathway to honest reflection and unmitigated self-expression.

“It really does shadow what is going on in your life whether you know it or not, like holding up an embarrassing mirror to your soul for the whole world to see,” he says. “I’m really fascinated with that — that level of openness and exposing your inner self that way.”

After working as a goldsmith for decades, he began painting still life as he became more familiar with using various techniques and mediums. This past year, he finally decided to enrol in a painting course at KPU to find new ways to improve his work.

At the start of the semester, KPU fine arts instructor Robert Gelineau gave him a term assignment to complete seven paintings following a specific theme or style. Dix painted those, and then some.

“Without even any thought really, I just started furiously slashing around on the canvas and it turned into something. And then once it turns into something, you have decisions to make, and then you’re on a track whether you like it or not,” he says. 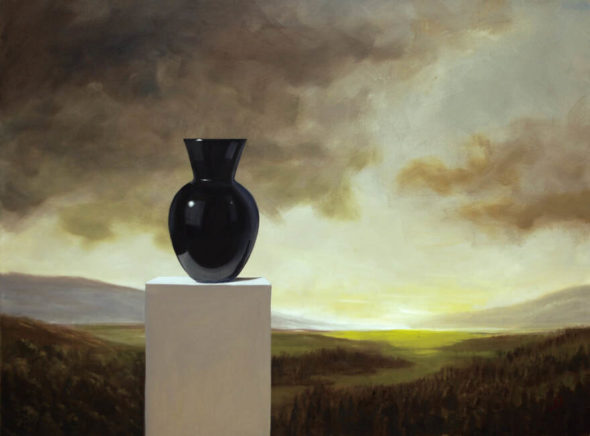 “All things that happen are allowed to happen. The good and the bad, allowed to happen for reasons that are so far beyond us. It’s indescribable. You just have to trust that and go with it.”

Before she passed, Dix says that his wife had organized a surprise birthday party for him and gifted him a satchel with which he could hold his painting supplies. She wanted him to pursue painting and find his true passion in that work.

“As I was painting, she was really, really, close to me and on my mind,” he says.

It took a while for him to realize that the art he was creating was about anything at all. The full meaning of the four paintings became clearer to him after a classmate pointed out some of the similarities.

“He said, ‘I was wondering what was going on. All your paintings seem to be about loneliness, but there’s hope,’” says Dix.

Once he finished the fourth painting, “Beloved,” he knew that they were all part of the same series, an expression of what he had been working through for years.

“I did intend that to be the last in that series,” he says. “That one is what made me realize, ‘Ah, I’m doing this for Victoria.’ And so the paintings just naturally seem to be, quite plainly, about love, loss, and hope.”

Dix still holds out hope that the paintings will be returned some day, but as time passes, that becomes more difficult to imagine.

“I have a feeling that ship has sailed, for some reason. The posters are all around the school. Whoever took them, I have no idea what they intend to do with them,” he says. “Were they to be returned, I would not berate or charge or humiliate [the people who took them].”

In the meantime, he hopes that his story might bring attention to “the lack of security measures taken” which could prevent incidents like this from happening at KPU in the future.

“She’d had her prints taken consistently. She had to take photographs of them to prove that she had done the work because they would go missing,” he says.

Though the 13 paintings are invaluable to him, he has painted pieces which are for sale online for hundreds of dollars. His works comprise a fraction of the various kinds of artwork which is stored throughout multiple rooms in the Spruce building.

He says that, without the concern of his friend Jani White, he would not have spoken out about having his art stolen publicly. White wrote a short account of the theft which was published on Dix’s blog and shared over social media.

“She said, ‘We have to do something about this.’ It became the ‘Julian Dix, Love and Loss Stolen Painting Show.’ I’m rather looking forward to it going away.”

All of the other students’ paintings were left untouched during the Dec. 13 theft. Dix says that some of his works had been signed and some had not, but they had all been kept in the same place among the painting racks which held the works of multiple students.

He was in contact with the RCMP and campus security for a while, but so far, there have been no promising leads.

“They do exist in this world for sure, unless they were destroyed completely,” says Dix.

If you have any knowledge of the whereabouts of the paintings, contact KPU security or the Surrey RCMP.