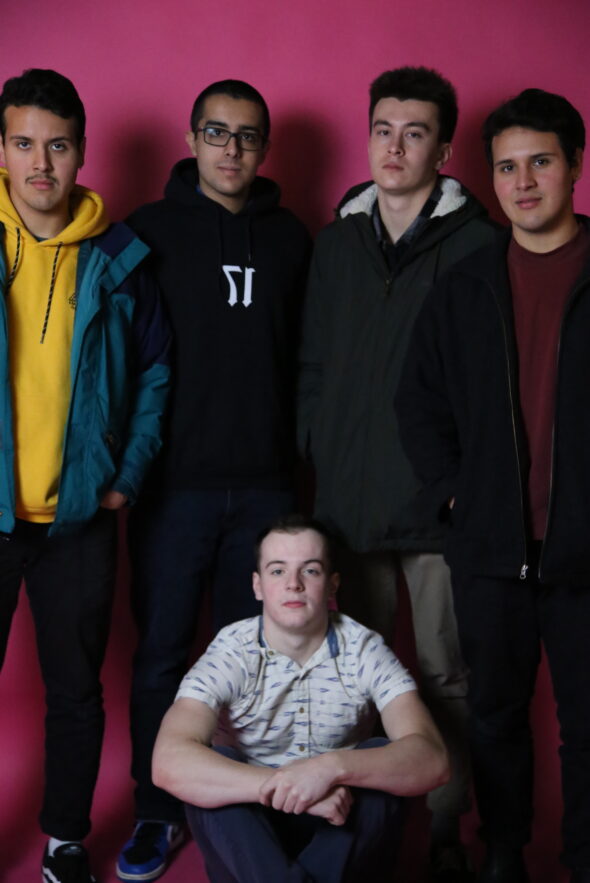 Joaquin plays guitar and sings and Julian plays the bass backed by drummer Stephen Coley, pianist Simon Freeman, and synthesist Hourmazd Naderi. Joaquin and Julian have been playing music together for almost as long as they’ve known each other (about 21 years, give or take), but it wasn’t until Julian needed to record an EP as a final project for his sound engineering degree that they officially started Blue Rivera. Eventually, they brought on Coley, Freeman, and Naderi, all childhood friends from elementary school.

“The funny thing about that EP is that we’ve never played it with the band. It’s kind of like the ghost EP because it doesn’t really represent anything from the band really,” says Julian.

Now, they’re focused on using “latino elements and folkloric melodies” to create something “a little more alive and a little more colourful” in their songwriting.

“Alternative bedroom pop is usually very soft, very simple, but we wanted to put that explosion from latino music on top of the techniques that we learned in school for producing, just to make it a little more exciting,” says Joaquin.

They also hope to play a “familiar electronic sound to the audience while introducing the acoustic sounds of a regular four-piece band.”

Julian in particular is inspired by the solo artist boom in the seventies, when acts like David Bowie, Donna Summer, and Elvis Costello were blowing up.

“I think what our vision is as a group is to bring back that performance, that rawness with the acoustic elements as well as introduction of pop sounds and … stuff that makes an electronic track alive and gives it momentum,” he says.

The latin influence in their music is obvious to anyone with an ear for the genre. Tracks like “Lost Cause,” which features Alisa Blanc, bump to a reggaeton beat and nylon-string finger picking. On others, like “Please Don’t Go”, a riff sampled from the Brazilian song “Admiraçao” by Paulinho Moska acts as the primary hook in an otherwise groovy, structurally simple pop song. But sometimes it’s absent altogether, leaving room for stylistic exploration on songs like “The Past” and “Armada”, which bring to mind the more ambient tracks on the Gorillaz album Fake Plastic Beach.

A listen through their discography offers consistent RnB vibes, vocal melodies built for radio, and the odd trap beat — likely an addition by Hourmazd, who’s a fan of the genre as both a listener and a producer.

The number of producers in the band is another reason for their stylistic variability. There are four of them — Julian, Joaquin, Hourmazd, and Stephen — who collaborate on every Blue Rivera track. Each of them bring their own influence and inspiration alongside Coley.

“Instead of it being just Julian and I, we have three other guys who can tell us, ‘Yo, do this, do that, or maybe we should change it up here,’ or whatever,” says Joaquin.

“The problem with having a twin, living with a twin, and making music with a twin is that you do literally every single thing together. Especially now in quarantine, I’m with Julian all the time …. It’s nice to have a band where everyone can add their two cents.”

The band will continue to roll out singles as they work on establishing a fan base, finding the sound that hits the hardest, and weaving increasingly more experimental elements into their compositions.

Blue Rivera will be performing live on Zoom on May 30 alongside Artemis and La Llorona from Montreal and Ital Blue, a Vancouver artist who will be playing solo. Check up on Blue Rivera’s social media on Instagram and Facebook for details and updates on what the band is up to.