BC Housing is attempting to temporarily rehome campers 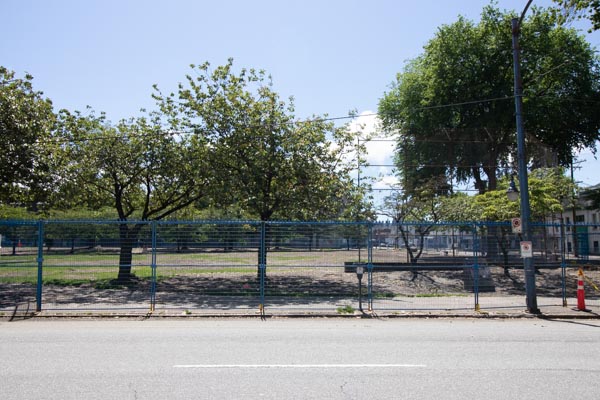 Oppenheimer Park, located in the Downtown East Side of Vancouver, B.C. (Lisa Hedmark)

Shane Simpson, B.C.’s Minister of Social Development and Poverty Reduction, announced a public safety order on April 25 to shut down and clear out the Downtown East Side’s Oppenheimer Park or “tent city” camp over fears of COVID-19 spreading through the at-risk community.

Simpson says “service providers and emergency responders struggled to safely deliver services to the park in the context of this pandemic, increasing vulnerability of people living in encampments.”

The park is now completely cleared, surrounded by blue gates with spikes on top, and patrolled by a security car in case any people attempt to enter the park.

“The intent of the process [of moving campers out of Oppenheimer Park] was to address the immediate and pressing safety risks facing our province’s most vulnerable by moving people away from dense encampments like Oppenheimer and into more secure, indoor accommodation that allows people improved access to hygiene facilities and wraparound healthcare and social support,” says Simpson.

Before the park was cleared, the local government and British Columbia Centre on Substance Abuse released a safe supply program with clinical guidance to help drug users during the COVID-19 pandemic. With borders closed to non-essential travel, drug users might struggle with finding a safe supply or being able to afford it due to the increased price of street drugs.

People who use methadone risk contracting COVID-19 when they go to pharmacies for their dose. The new program allows users and people on methadone to either take multiple days or weeks of a prescribed drug home. They may also be prescribed the pharmaceutical equivalents of their street drug of choice.

The park was ordered to be cleared of all campers by May 9, after two years of occupation there.  Social workers and volunteers  provided services to the occupants and a small safe injection site was operating in a tent. In the end, everything that was not removed by the former occupants was bulldozed and thrown into a garbage truck. One woman said in an interview with Vice that her son’s and her mother’s ashes were in a tent that she was not able to clear in time, and she lost their remains as a result.

The city attempted to shut down the camp in August 2019, according to an article by The Star. The city’s second attempt was under a much stricter time constraint due to the fear of COVID-19 spreading through the park, as two cases were confirmed in Vancouver homeless shelters.

The BC Housing website lists all of the measures the local government is taking during this pandemic to fight the spread of COVID-19. The last point on the list states that they have “provided temporary indoor housing for everyone who was living at Oppenheimer Park in Vancouver, and are in the process of doing the same for those living at Topaz Park and along Pandora Avenue in Victoria.”

The City of Vancouver has also pledged to install safer bathrooms, removing current porta-potties and replacing them with staffed trailers. Mayor Kennedy Stewart said in a press release that “the installation of these temporary washroom trailers will ensure that all residents can access essential facilities in a safe and hygienic way.”

Now that Oppenheimer park is closed, Yaletown residents have complained about increased violence and drug use in their neighborhood. Residents of the park are reported to have been rehomed to hotels closer to Vancouver’s downtown core.

“I do know the Howard Johnson on Granville Street is one of them and the Holiday Inn has some former Oppenheimer residents there,” said City Councillor Pete Fry in an interview with CTV News.

The future of Oppenheimer Park residents is uncertain, but plans to reopen the park have not yet been announced.