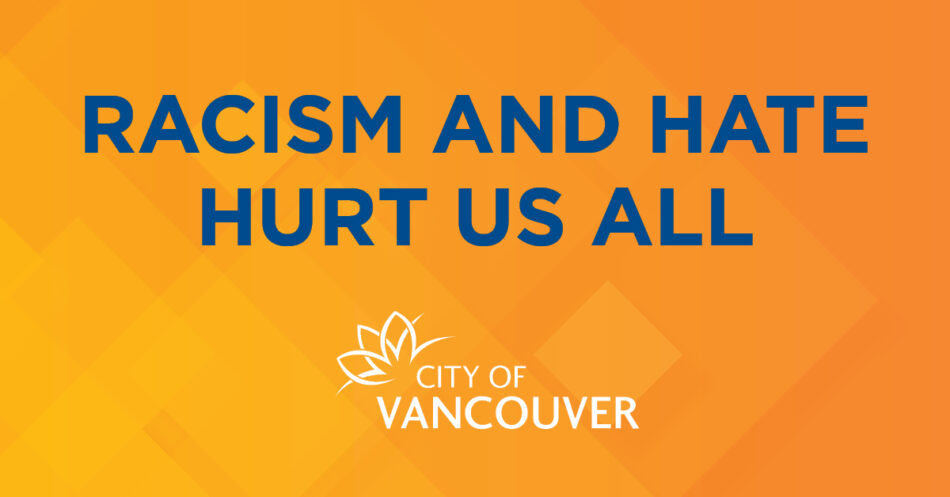 Mayor Kennedy Stewart declared May 29 Vancouver’s Day of Action Against Racism in response to a surge in racist hate crimes during the COVID-19 pandemic. His proclamation was issued online in six languages as part of a new multilingual awareness campaign led by the city’s Equity and Inclusion Team, based out of the municipal Emergency Operations Centre.

“This is the first time we’ve been able to have multilingual language pages on the city’s website,” says Lara Honrado, the Director of the Equity and Inclusivity Team.

Honrado says she and her team are “trying to help ensure that Cantonese, Mandarin, Punjabi, Tagalog, and Vietnamese” content is being put out through the campaign as well as Farsi, Arabic, Spanish, and French.

“We really wanted to have information that was shareable easily in these languages, so that’s part of it. We have a video message that we posted publicly today that is in 11 or 12 languages,” she says.

The Equity and Inclusivity team has also responded to anti-Asian hate crimes, namely the repeated vandalism of the lion statues in Vancouver’s Chinatown. They collaborated with Goodbye Graffiti to remove it and the VPD to ensure it doesn’t happen again.

“We are in communication with community members who are most directly impacted by this,” says Honrado. “The equity and inclusion team are staff that are representative of the communities that we know we need to better address.”

The team has and will continue to focus on “the best way to respond based on what community needs are.”

As part of the awareness campaign, city representatives have appeared on radio stations with different audiences and held a series of multilingual town halls with various communities.

City Manager Sadhu Johnston has said that “targeted xenophobia and anti-Asian racism is making it even more of a struggle for people to cope with the impacts of the pandemic.”

“We are committed to ensuring that every resident feels welcome in Vancouver and will continue to take action, both during the pandemic and beyond, to address racist behaviour,” said Johnston.

She emphasizes that the Emergency Operations Centre is currently focused on responding to the COVID-19 pandemic with a particular focus on helping anyone being disproportionately affected, with “the understanding that over 50 per cent of the people in the City of Vancouver, according to the 2016 census, identify as Indigenous or a visible minority.”

“There’s a bigger spectrum of work we have described as ‘community resilience’ that involved people in our communities who are homeless, don’t have secure housing, or are facing other barriers that have been exacerbated by the COVID-19 pandemic,” she says.

“When it comes to the racist incidents we’re seeing right now in Vancouver, racism is part of Vancouver’s history, B.C.’s history, Canada’s history …. I think there are a lot of lessons we’re learning from the past and from our history when a crisis happens and we see more overt racism.”