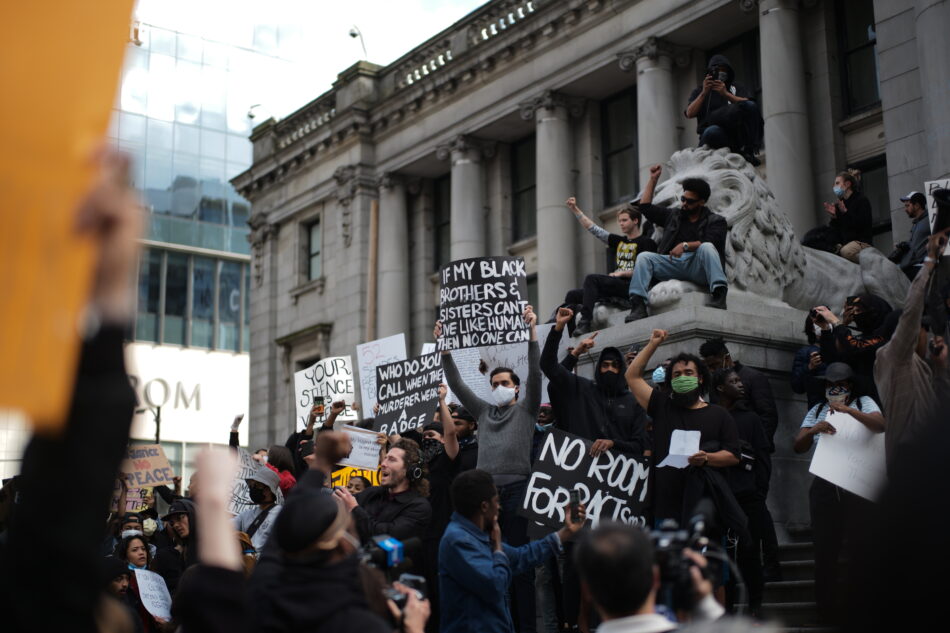 Several protesters hold up signs while chanting ‘black lives matter’ and ‘no justice, no peace’ during the George Floyd solidarity protest, Sunday, May 30 in the rear of the Vancouver Art Gallery. (Tristan Johnston)

Thousands of people gathered on the steps of the Vancouver Art Gallery on May 31 to encourage taking action against anti-Black racism. Though the protest comes a week after Minneapolis police officer Derek Chauvin killed George Floyd, many of the speakers emphasized that the racism experienced by people of colour in the United States also exists in Canada.

Speakers also highlighted the death of Regis Korchinski-Paquet in Toronto, which occurred five days prior, after the police were called to her home.

The event was organized by a member of Black Vancouver, Jacob Callender-Prasad. Although they haven’t organized a protest, Black Lives Matter Vancouver stated in a Facebook post that they “support Black folks and groups that are exercising their right to protest white supremacy and state violence.” The post also stressed the importance of keeping the protest peaceful and being mindful of physical distancing.

Callender-Prasad called for speakers to come up to the steps and share their experiences with police brutality and racism. Some were born in Canada, others were immigrants from African and Carribean nations, and many were either Black, mixed race, or Indigenous.

“White privilege is if your parents don’t have to sit down with you and explain to you how to act with cops,” Callender-Prasad said to the crowd. “It’s the fact that people will not call you racial names to put you down and demean you.”

Other speakers discussed being inexplicably stopped by police while walking or driving or being told they fit the suspect of an unnamed crime they didn’t commit, sometimes multiple times on the same day.

Younger speakers discussed experiencing racism in school or being called racial slurs in earshot of instructors and seeing nothing done. Sometimes the teachers themselves were racist. Some of the young women there talked about not feeling comfortable in their skin, being told they were “pretty for a Black girl,” or being told their parents wouldn’t like them dating a Black person.

From time to time, the crowd burst into chants of “Black lives matter,” and “No justice, no peace.”

A group of Indigenous women were also present in solidarity with the protesters. They said that they understood the pain felt by black Canadians, telling the crowd that Indigenous people are also disproportionately targeted by the police. One young woman shared a story of her eight-year-old sister being taken away by the government.

“Thirty-three per cent of people who were shot by the RCMP were Indigenous. Twenty per cent took place on reserves. Indigenous people make up five per cent of the population,” one of the speakers told the crowd.

“I would love to see our community and our activists going on the news channels and talking about this. I want to see us take this problem full-front, head-on, and address the situations that need to be addressed in this country,” says Callender-Prasad.

Callender-Prasad agreed with the call to action issued by the Canadian Association of Black Journalists, and said that Canada needs to invest in more resources for helping Black people succeed.

“We’re not the richest people. We still kind of live in poverty. We still have a harder time getting into universities or passing through school. We get suspended for getting mad at racial comments,” he said.

Callender-Prasad added that the protest was peaceful and successful.

“We kept it peaceful. We didn’t riot,” he says. “We kept to ourselves and did what we needed to do and get our message across. I am so proud to say I am a Canadian today, so proud to live in Vancouver, so proud to be a Black man in Vancouver today, and everyone here should be proud as well.”