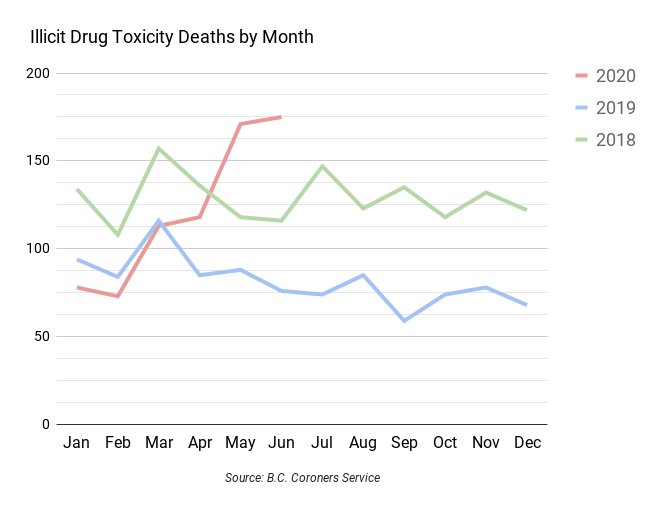 This summer, B.C. witnessed the two worst months for overdose deaths in the province’s history with 171 lives lost in May and 175 lost in June. Meanwhile, in the hopes of addressing the overdose crisis, the Canadian Association of Chiefs of Police sent a recommendation to the federal government to decriminalize simple illicit drug possession.

Adam Palmer is a VPD police chief and the president of the Canadian Association of Chiefs of Police (CACP). CACP focuses on supporting and promoting efficient law enforcement.

Palmer made the announcement in support of decriminalization during a news conference on July 9, following the release of the CACP’s findings and report.

“Arresting individuals for simple possession of illicit drugs has proven to be ineffective. It does not save lives,” he said at the conference. “The CACP recognizes substance use and addiction as a public health issue. Being addicted to a controlled substance is not a crime and should not be treated as such.”

On July 16, the B.C. Coroners Service released a report which highlights the record-setting number of illicit drug toxicity deaths in the months of June and May this year, which surpassed the 161 overdose deaths reported in December, 2016. The report says there have been a total of 728 illicit drug overdose-related deaths in B.C. in 2020.

An additional report titled “Stopping The Harm: Decriminalization Of People Who Use Drugs In B.C.” written by the Provincial Health Office explains the province’s long struggle with the overdose crisis. Back in April 2016, B.C.’s Public Health Officer declared the crisis a public health emergency under the Public Health Act — a first for B.C. and Canada.

“Decriminalization of people who use drugs allows for alternative pathways for law enforcement to work with the health and social systems to rapidly link people to a range of evidence-based treatment and other social services,” reads the report.

These findings set the stage for an online webinar, “A Tale of Two Crises: COVID-19 and The Overdose Emergency,” which was hosted by SFU on July 23. The webinar featured policy experts, activists, and community members who spoke about the overdose crisis and the COVID 19 pandemic.

During the panel, speakers discussed why drug addiction should be considered a public health issue and called for safe supply and decriminalization.

He says the pandemic might have caused an increase in overdoses because of border closures, which ultimately prevents drugs from entering Canada from abroad. This forces individuals to source their drugs locally, which can be dangerous.

He also says fewer people have been overdosing in emergency rooms since March.

“People were afraid of getting COVID at emergency rooms … so for that reason, we think that they weren’t calling 911. We think people were less likely to observe overdoses during the pandemic because nobody was on the street,” says Lysyshyn.

Angel Gates was one of the speakers at the SFU webinar. She is an actress and a facilitator and storyteller with the Megaphone Speakers Bureau. Gates, who was introduced as being from the Haida Nation, says that the majority of people who use drugs in downtown Vancouver are Indigenous.

“We were dying fast enough before the pandemic. I am tired of seeing my people die,” she says. “People from the Downtown Eastside are my people. Like, I love these people. I need these people.”

According to the Stopping The Harm report, the two largest demographics of people who died while using drugs alone were Indigenous people and males aged 30 to 59.

When CACP looked at the statistics on overdose deaths, the organization felt compelled to do something, says Mike Serr, Co-Chair of the Drug Advisory Committee and previous Co-Chair of the Special Purpose Committee on Decriminalization with the CACP.

“Many of the things that we were doing were not being effective and were not saving lives, and we wanted to start exploring and looking at different ideas,” says Serr.

He and his team analyzed different decriminalization models. They took inspiration from countries like Portugal, Norway, and New Zealand that have already decriminalized drug possession.

Portugal decriminalized the possession of all illicit drugs for personal use in 2001, and expanded resources like harm reduction and social reintegration programs.

Apart from reducing drug use deaths, a report by the Canadian Centre on Substance Use and Addiction (CCSA) noted that after the decriminalization was implemented, HIV diagnoses related to injection drug use in Portugal decreased from 60 per cent of all diagnoses in 1999 to just 5 per cent in 2015.

Leslie McBain is the co-founder of Moms Stop The Harm, a group of Canadian families impacted by substance use related harm and deaths. The organization advocates to change outdated drug policies and provides peer support to grieving families and friends who have lost someone due to the overdose crisis.

“People who use drugs are not criminals, and they use illicit drugs [because] they can’t get legal, regulated supply of the drugs they need,” she says.

“It costs a lot of money to arrest people and put them in the criminal justice system, to incarcerate them, and it benefits no one to do that. So what we like to see is that same kind of money put into treatment options, pathways to recovery if a person should want that,” McBain continues.

She says some drug users don’t want to get off drugs, and the justice system should not force them into rehab.

“I always say that if a person is ready to go into recovery and wants some treatment, it should be there for them,” she says. “We can’t force people.”

Though the CACP did come to an agreement on decriminalizing possession of a small amount of drugs, Serr says there was dissent among chiefs during the decision-making process.

Serr says that the CACP believes that decriminalization can reduce overdoses in Canada.

“Number one is de-stigmatizes drug use. Number two is that, if this is successful, it will increase options for people who are struggling with problem access issues. We will have more tools and programs available for them … including safe supply,” he says.

With the association’s recommendations in place, Serr says it is now up to governments to take the next step towards decriminalization.

Garth Mullins, who also spoke at the SFU web panel, is the host and executive producer of Crackdown, a podcast about drugs, drug policy, and the drug war. The podcast is led and produced by drug user activists in Vancouver.

“[John Horgan] is gaslighting everybody about saying that he is writing to Trudeau to ask about decriminalization. Trudeau isn’t ready. He doesn’t want to do it, and this a lie. A classic Canadian pastime of pointing to the other levels of government … I’m tired of that,” he says.

Lysyshyn says that Canada already has a policy roadmap for decriminalizing drugs.

“We have gone through that process with cannabis, and I think it has been quite successful. We have the model to do it, and now we have to do it with the drugs that are actually harming people instead of the once that aren’t,” he says.

McBain says destigmatizing drug use is important for the well-being of people who use drugs.

“Everybody in society thinks you’re a terrible person because you use drugs, and these drugs are illegal, so you must be a criminal,” she says. “If people are decriminalized for possessing small amounts, that’s a step towards reducing that stigma.”

When a person has access to a regular safe supply of the drugs they need, they become healthier, McBain says.

“Substance use is a complex issue that cannot be resolved by any single change in policy or practice,” reads the report. “There is neither a single nor an immediate solution. Recognizing that substance use is a health rather than a criminal justice issue is a fundamental starting point for reform.”

“They bring stability to the community by improving public order and reducing the number of injections taking place on the street,” it reads.

“Many of those sites closed down, and we worked really quickly to get them open … but the clients haven’t really come back to the same degree,” he says. “Like everybody else in the world, they are afraid of getting COVID.”

VCH is trying to move these services outside to make people more comfortable.

“People just need to know that we are people too,” Gates said during the panel.

“I live Downtown, I have three kids, I work, I have a dog … and I use drugs, and I’m not really ashamed of it. I do what I have to do. If we could come out of the shadows and stop hiding, less of us would be dying.”