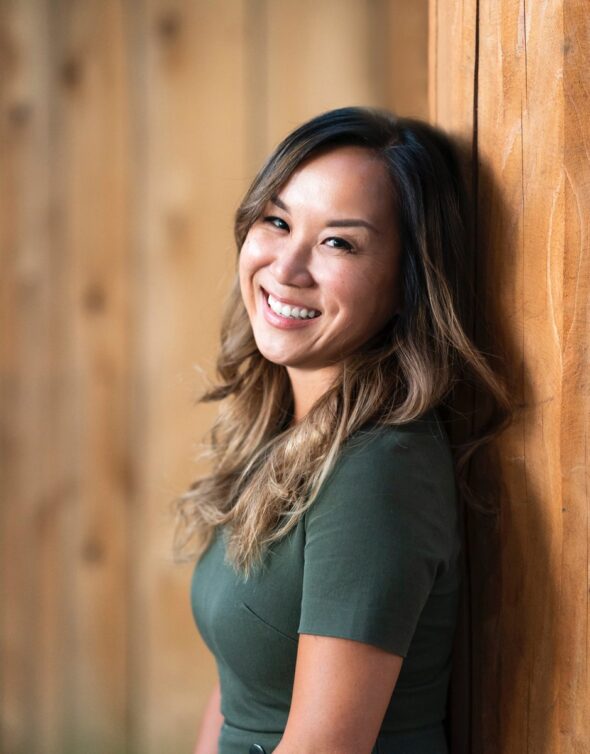 It all started out with a love for writing, says Andrea Woo about her 17 years of journalism experience.

Today, the award-winning KPU journalist is a reporter for The Globe and Mail focusing on substance use, drug policy, mental health, and other health issues.

With more than a handful of journalism awards already under belt, including five Jack Webster awards, Woo received the Distinguished Alumni Award from KPU on Oct. 20 at the virtual convocation ceremony.

When did you join the KPU community and why?

I started at Kwantlen in 2002, so it was right after graduating high school at 17. My parents did not let me have a gap year. I started school right away.

I always wish I had a more inspirational story for how and why I started, like ‘this thing happened to me, and I knew at that moment that I wanted to be a journalist and make a difference!’ But the reality is I had no idea what I was doing. I knew that I really liked writing, and I did well at it in high school — math and science, not so much. So I was like, ‘I’m going to go in this direction.’

I knew that there was a journalism program at Kwantlen, and figured I would try it out and see what it was about. And then, what I found was a program with instructors who turned this vague interest in writing into an interest in journalism. They taught me what I needed to pursue it. I also had two internships during my four years there at the Georgia Straight and at The Province, so that was my official introduction to working in journalism.

[While I was at KPU, I wrote a story] on the opening of Insite, Vancouver’s and Canada’s first public supervised consumption site. I don’t actually know why I did it or what drew me to it. I think I just heard that it was happening, and I knew that it was a big deal. I don’t know why I was interested in it specifically, but I went and covered it. I spent the whole day talking to these people in the Downtown Eastside and staff at the site.

I have this really vivid memory of sitting out on the steps with this woman that I had met. Like I was just talking to random people who use drugs about why we need a site like this, and this woman was telling me the most gutting story about her life — abuse she had faced, and drug use, and why this site was needed. And it just struck me that everyone I spoke to that day was so open with their stories and so candid.

I remember being really interested in everything that I had learned that day and being really excited to put that story together. And my instructor at the time, Mark Hamilton, he was really supportive, and he said this was great work.

In hindsight now, I covered Insite’s opening, and now I write mostly about substance use and mental health, and I write about the overdose crisis and harm reduction a lot — so that really sticks out to me when I think about it.

Then, of course, this year with COVID as well, and the intersection of COVID and the overdose crisis and how one has exacerbated the other. So, it’s the two big public health crises right now.

What is something that you’d like to say to people new to the community?

Be sure that you really want to do it, [to get into journalism]. It’s a tough time in the industry. There are layoffs everywhere, in print, in broadcast, newspapers are folding, reporters are being stretched really thin. There are long work days, and being a journalist definitely seeps into your personal life.

It’s your own drive and passion that will make the whole thing worthwhile.

And I think the big thing that I’ve thought about over the years, is to find out what it is that drives you and don’t let anyone snuff that out.

You won’t be able to report on only the things that you care about. You kind of need to do it all, especially when you’re starting off. But it’s those stories and those issues that you personally care a lot about that drive you and make your work meaningful. And those will probably be the stories that you most excel at. So, make time for those passion projects, even if they are sometimes on your own time.

I had a colleague who said, ‘Dude, just do it on your own time. Trust me, I did it, and I won a Jack Webster award for this project that I really wanted to do that no one else believed in.’ And so I did, and I ended up winning a Jack Webster award for a project I really wanted to do that I didn’t have a lot of support on at the beginning. It’s those things that will make everything worth it at the end.

What is something that you would like people to know about you?

Oh, God. I struggle to talk about me. I feel like I got into print for a reason like I hate broadcast because I hate speaking and receiving attention. I like to write about things and people.

But, I guess one thing — especially anytime an award is announced — people are like, ‘Oh, you do such great work, this is inspirational!’ But I have no idea what I am doing a lot of the time. I started out in music journalism, and I just, sort of, meandered my way to writing about health at The Globe and Mail. Just one foot in front of the other to get to where I am now.

Like from a distance, it looks like I know what I’m doing, and like I put out a whole bunch of good work, but I have no idea what the fuck I’m doing.

I have had stories sent back saying I need to do more reporting on them, and I feel like a fraud sometimes, but then every time I hit these roadblocks, it makes me a better journalist. I am very uncomfortable for a while, and when I work my way through it, I’m very, very stressed, but at the end of it, it makes those [stories] a little bit better every time.