KSA disqualifies 21 election candidates over allegations of slating and forgery 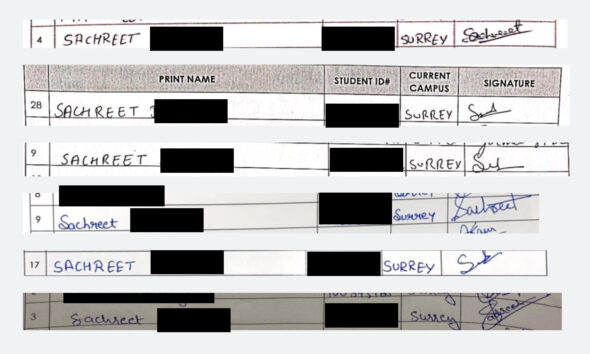 After a delay in sharing the results of its general election, the Kwantlen Student Association has confirmed that of the 24 candidates running in the general election, 21 have been disqualified following two decisions made by the KSA Chief Returning Officer.

One of the decision reports states that after investigating three complaints made by candidates, “it became abundantly clear” that a large number of candidates were slating, which is defined as “two or more candidates running for elected office in a coordinated fashion to achieve a mutual advantage in an election.”

Several candidates participated in a group chats where they discussed election strategies and referred to themselves as a team, including what the report deems “language that implies a coordinated group effort, including the phrase ‘please support us in our election and vote for us.’”

The report says that some of the candidates might have “had no intention of breaking the rules and may have gotten wrapped up into group politics without being totally aware of it and didn’t fully understand the rules of the election. However, this does not remove the responsibility they had to not break the rules.”

A number of social media accounts were additionally used to promote groups of candidates over the campaign period.

The investigation also determined that a number of candidates likely forged signatures on their nomination forms prior to the campaign, and that when questioned about it, they “admitted that they couldn’t meet all their friends, so the friends allegedly provided them consent to sign on their behalf.”

The report adds that “a large proportion of signatures do not match the signatures for the same individual on other candidate nomination forms. Indeed, they are wildly different signatures with different character structure.… This is a very strong indication of forgery; a technique of fraud.”

One report says that the CRO also talked to “a number of well situated KSA members, many of whom confirmed their belief that widespread slating had taken place, but they are unwilling to go on the record, given concerns for safety, allegiances and possible retribution. This is a common theme within KSA elections and it seems other complaints would have been made as well if it weren’t for concerns regarding safety.”

“Indeed, another complaint was submitted,” continues the report, “but was quickly withdrawn when the complainant received calls and complaints.”

Three of the candidates were also connected to an individual named Gursewak Uppal, who told the CRO that he had sent out approximately 3,000 emails urging recipients to vote for Gurjodh Signh, Aman Khurana, and Rohan Garg. The emails were reportedly sent to students after their email addresses were taken from online lists on Moodle, and some were even sent to KPU staff and faculty, despite the fact that they aren’t eligible to vote in KSA elections.

“The level of effort employed by Gursewak is so high, it is reasonable to believe his actions were coordinated with at least some candidates,” says the report, adding that for some candidates, “generally they acknowledged they were friends, but that Gursewak was campaigning on his own accord, however, in at least one case, they contradicted each other, with one stating they didn’t know the other and the other stating that they were friends. This further erodes the credibility of these individuals on this matter.”

The Runner has reached out to several candidates, KSA members, and staff for comment, and will provide updates as more information becomes available.