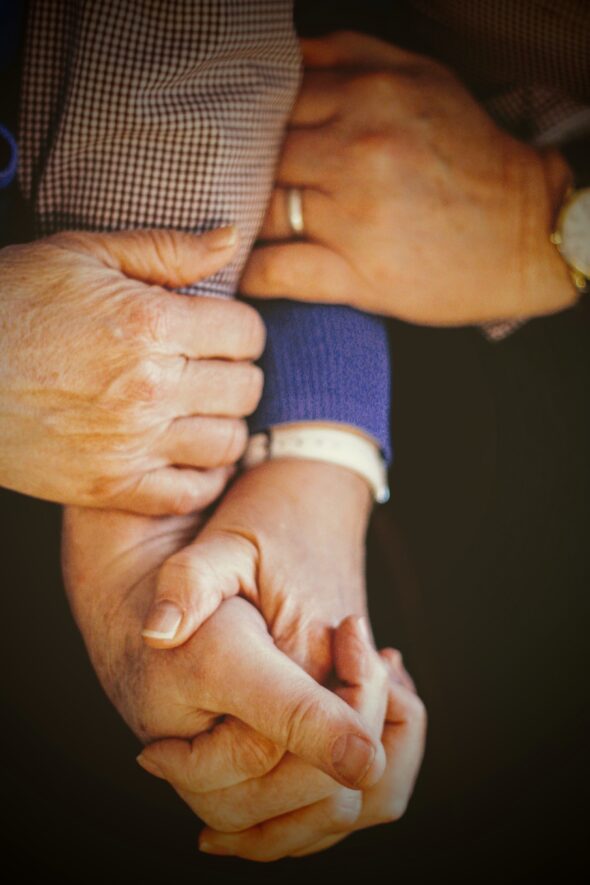 I remember the last time I held my grandfather’s hand. His skin was wrinkly from old age and cold to the touch from the hospital’s low temperature. He was pale and thin from weeks of unintentional self-neglect.

It had been about five months since my mom had been trying to arrange a home for him, as he could no longer look after himself or find his way home, his mind lost to Alzheimer’s disease. But no home had the 24-hour care my grandfather needed. So, he remained at the hospital as my mom kept searching.

He didn’t talk much at this point. His mind was once brilliant. He could recall every player, the score, and team names from any hockey game in his life and talk about it like it happened yesterday. There was a time we would tease each other about the Canucks games, he always cheered for the other team. He was my biggest fan at my softball games and piano recitals. And our birthdays were just days apart, so for years, we had celebrated them together.

But as he wrapped the flimsy hospital towel around my hand to instinctively protect me from the chill in the air, I knew he didn’t know who I was. He had already forgotten my name.

The next time I saw him, he was in a hospital bed on life support because he had caught pneumonia during his stay at the hospital. He seemed to look right through us when we visited, his faint breathing raspy and gargled. I could count the bones through his skin, and his eyes were hollow. He looked like a skeleton.

The doctor only urged my mom to remove the life support instead of giving him antibiotics and pain relief. He was still awake, still aware, just didn’t have the mental ability to understand. Removing life support only meant he would dehydrate and starve to death.

My mom refused. He was already suffering enough.

We never found a home for him. And a month later, on June 1 of 2015, my grandfather died, his lungs drowning in his body’s own fluid.

People with Alzheimer’s disease or other age-related dementia suffer unnecessarily because their condition is often not recognized as fatal, and there is a lack of quality end-of-life care for people with dementia.

A study published at the U.S. National Library of Medicine found that patients with dementia had a “two-times greater risk of death” due to pneumonia compared to patients who did not have dementia, and that “older adults with dementia in particular are more likely to die from pneumonia than those without dementia.”

Under the current law, consent to receive medical assistance in dying requires a person to have the capacity to make informed decisions, so the person must be able to make and express the choice themselves, understand their illness, have insight into how MAiD applies to their circumstances, and be able to demonstrate their logical reasoning behind their choice.

The government rejected that amendment to Bill C-7 in February. So the law still requires a person requesting MAiD to have the capacity to provide consent immediately prior to the procedure, which excludes people with or at risk of dementia.

Some people are lost to a void in their mind, who catch illness like my grandfather and suffer in their passing as their family watches. This doesn’t have to happen.

The bill does not go far enough until all Canadians are included and given access to medical assistance in dying. People are going to continue suffering without that amendment.