Chartwells will be providing a new menu for campus food services 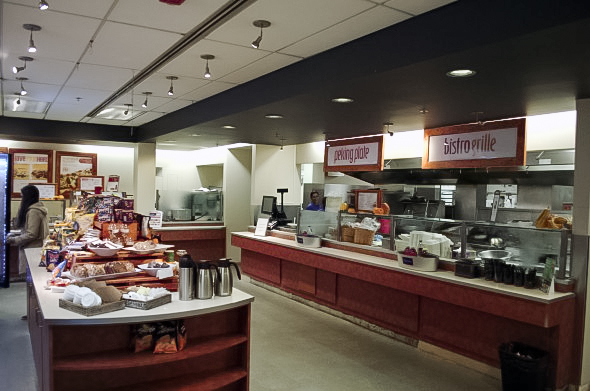 After over ten years with Sodexo being the food service provider to students and faculty at Kwantlen Polytechnic University, supplying Tim Hortons and the cafeterias, a new organization has partnered with KPU to provide food service to the university for the foreseeable future.

Over the next ten years, Chartwells will be affiliated with KPU as the new food service provider when students and faculty return to campuses in the Fall semester. The contract went into effect May 1 and will last until April 30, 2031.

“It comes down to our previous contract with Sodexo. It actually expired last year in June, but because of the COVID situation, we extended it. I mean, we weren’t serving food anyways. Everything was closed, so their contract officially came to an end on April 31 of this year,” says Karsten Purbs, director of ancillary services for the university’s food service.

In a committee meeting, Chartwells was selected as KPU’s next provider for food service. Purbs says that during the meeting, students and faculty rated different proposals from companies, and at the end of it Chartwells was the definitive leader.

Purbs says they put together parameters for what they would like to see in the company’s presentations.

Purbs says that KPU students and faculty can expect Chartwells to bring a variety of food through the different campuses, which is something Sodexo had received criticism for in the past from KPU students.

“About a year and a half ago or so, [students and faculty] indicated improving the variety, and that was one of the key things that they wanted to see…and that’s something that Chartwells has brought forward,” he says.

“If you’re looking at Richmond campus, different things from poke bowls to some Asian flare in some of the food, some of the traditional items. Surrey again will be a little bit different. There’s one thing that they’re working on, we will be possibly one of the first campuses to have it, but until that’s confirmed, I can’t really say.”

In addition, Purbs says that they are looking forward to incorporating foods from local providers and produce over 70 to 75 per cent of the products or menu offerings from scratch.

The physical style of the Tim Horton’s on campuses will also change under the Chartwells contract.

“We’re also going to look at the menus that are offered there to see if there’s an opportunity to increase the offerings currently, or pre-COVID. If you went into Tim Hortons at KPU over a drive-through Tim Hortons off-campus, the menu offerings were much more extensive at those versus KPU,” he says.

The reason that there are fewer menu items compared to an off-campus Tim Hortons location is because the Tim Horton’s at KPU has a smaller space. However, Purbs says Tim Hortons has new technology and new menus being offered that will hopefully allow franchises that have smaller footprints to provide more food items to their customers.

Overall, Purbs says they are looking to enhance quality, offerings, and selections in food items brought to the KPU community.

“I think everyone’s going to be very happy in what they’re gonna see,” he says.