With about seven minutes left in the fourth quarter, and his team up 20 points on the Capilano University Blues, Kwantlen head coach Stefon Wilson paced down the sideline towards his players, a little faster than usual, and screamed loud enough for the entire gym to hear. 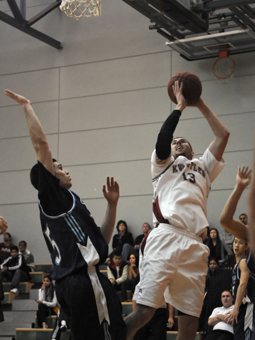 It was in response to those players on the bench not alerting their on-court teammate Aaron Ram that the 24-second shot clock was about to run out. As the clock reaches 10 seconds, the bench is more or less responsible for counting down the remaining seconds to let those on the floor know they have to get a shot off soon.

Normally, this error would not have been a big deal – as least not when a team’s up 20 points in the fourth quarter. But Wilson had seen this happen too often. His team would get a lead – or at least stay close to – an opponent in the first half, then completely wither in the third and fourth quarters.

Soon after that shot clock violation, the momentum seemed to shift in Capilano’s favour. Wilson called a timeout, quickly pacing back towards his bench and said something that may prove to be the turning point in the Eagle’s season.

“I am NOT going to let this happen to us again.”

In the final seven minutes, despite relinquishing that 20-point lead due to a barrage of Capilano three pointers, something changed within the Kwantlen men’s basketball team.

Depending on what happens tonight against Quest University, and then the final four games of the season, Wilson’s motivating burst of emotion at that seven-minute mark might have completely lifted Kwantlen’s season out of what previously seemed like a bottomless pit.

“The problem is, when you’re not used to winning, you have no idea how to play when you’re up 20 points,” said Wilson after the 104-95 victory Friday night. “It’s tough to go in and just get mad at them when you’re coming off a four-game losing streak, and you’re used to trying to just crawl back into games – then going into win-mode.” 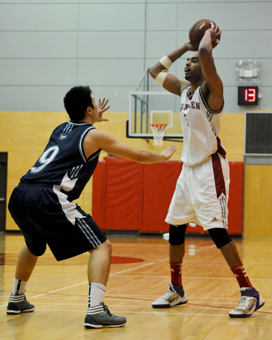 Eagles captain Ali Bosir looks for an open man during Friday night’s game against Capilano. Bosir nearly notched a triple-double with nine assists to go along with his 25 points and 22 rebounds. (Brian Jones/The Runner)

Ram led all scorers with 34 points and grabbed nine rebounds as well. He ended the first half almost without error, going 8-10 from the field and 5-5 from beyond the arc. Ram ended the game shooting 50 per cent for the first time in 2013.

Fourth-year centre Ali Bosir racked up another impressive stat line, going off for 25 points and 22 rebounds, as well as nine assists for the near triple-double. Nii Engmann finished with 22 points, and Jag Takhar added 12 of his own – all dialed up from long-distance.

The Blues were led in scoring by guard Igor Jesovnik, who found holes inside Kwantlen’s defense all night and dropped 29. Point guard John Leong added 18 after some hot fourth-quarter three-point shooting, and dished out eight assists.

Capilano, who now ties Kwantlen with a 5-11 win-loss record, trades places with the Eagles and moves into last place due to point differential.

So what changed? Why did the Eagles look like such a polished, cohesive squad on a night where they needed to win?

“I can’t stand doing this, but we had to change our offence this week,” said Wilson. “We had to add some cuts in order to get layups and penetration – and create continuity. We had no choice, we had to change it.”

But is this win coming too late in the season? The Eagles have five games remaining, two of them being against top-ranked Langara College and Vancouver Island University (VIU).

And even though they only sit one game back of both Douglas College and Columbia Bible College, they basically need to win three of these last five, and hope for a couple of key losses from Douglas and CBC. 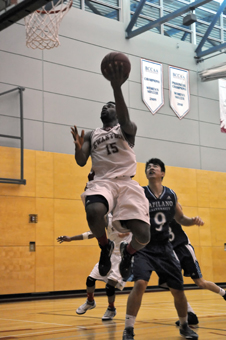 “You take a win anytime,” said Wilson. “Until it’s over and we can’t get into the playoffs, we’re going to keep competing.”

Tonight’s match against Quest carries a hug weight of importance in determining how Kwantlen wants to finish the rest of their season.

If they pick up the win, it puts them on the right track for securing a playoff berth.

But if they lose, it might just be the last straw for a team that’s been nearing implosion for the past month.