There was a chance that Kwantlen would be heading into their final weekend of the PacWest regular season with no real reason to compete other than pride.

But after dominating Douglas College Saturday night in a must-win game for the Eagles, their playoff hopes remain intact. 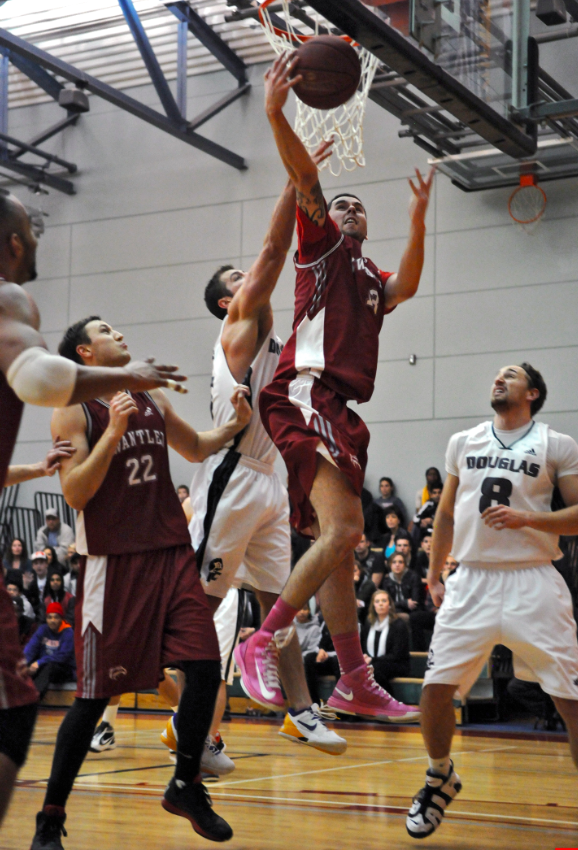 The Eagles played some of their best basketball and used a huge run in the third quarter to beat their Royal rivals 80-65 in their final home game of the season.

“It feels good to be alive,” said Kwantlen head coach Stefon Wilson. “I was really proud of our defense tonight. When you give up only 65 points, you’re probably going to win.”

Ali Bosir racked up another monster double-double, scoring 19 points and ripping down 21 boards. The 6-foot-6 league leader in both those categories also added six steals on the night.

Shooting guard Aaron Ram led the Eagles in scoring, putting up 24 points – including four three-pointers as well as five assists.

Douglas was led by Mark Dabrowski, who bullied his way to 20 points and 10 rebounds.

Both starting lineups were responsible for the bulk of the scoring, with Kwantlen’s bench only providing six points off the pine and Douglas just two.

After an even first quarter, Kwantlen began to put together a run in the second, and carried the momentum over to the third – using a string of successful offensive possessions and feeding off the home crowd’s energy that amplified with every bucket.

Despite leading by as much as 19 points early in the fourth, the Eagles couldn’t stop the brute tandem of Douglas’ Dabrowski and Devan Haynes, as both posts relentlessly attacked the paint.

Then, after cutting the lead to just nine with two minutes remaining, Royals guard Dustin Egelstad caught a pass on the fast break and banked a runner, in what looked to me like a blocking foul from Eagles guard Nii Engmann. The referees thought otherwise and called Egelstad for a charge – no basket.

Soon after, Kwantlen regained their composure and sealed the win with what worked for them all game: suffocating defense.

Kwantlen has to now go perfect in next week’s island road trip where they’ll face second-place Vancouver Island University and sixth-place Camosun College. If they win both, they still have to rely on Camosun, Capilano University, or Douglas to lose both of their respective games and have Columbia Bible College drop at least one of their final two matches.

Those are some pretty big ifs. But Wilson realizes that it’s what they’ve brought upon themselves.

“It’s tough, but I mean we’ve put ourselves in this situation,” he said. “We let some games get away, we lost some at the buzzer. I don’t agree when people say ‘oh, it’s a long season.’ Because at the end of the season, you’re told what needs to happen in order to go to playoffs, but it’s just because it’s happening at the end of the season that it gets magnified.”

“What about when we went to the island the first time and blew a 13 point lead? My philosophy will always be that every single game is important.”

And even though Wilson believes that the win over Douglas has got his guys in the right mindset for their final bouts, he’s not looking past the war that is set to ensue next Friday and Saturday.

“It’s going to be tough because these are two good teams,” said Wilson. “Playing on the road is always hard. Their balls, their rims, their nets, their court. It’s not going to be easy.”

Getting a vital win against Douglas wasn’t easy. The Eagles’ entire season hasn’t been easy. And going into these final games, nothing changes.