Fashion graduate Ana Prpic and her line, 4th Phase Maternity, wowed the crowd on April 5 at the River Rock Casino.

The Show kicked off in grand fashion on Tuesday, April 5 at the River Rock Show Theatre, earning rousing applause from the tightly packed room.

The Show, put on by Kwantlen’s Fashion Design and Technology program, serves as a way for graduating students to showcase their hard work and talent. 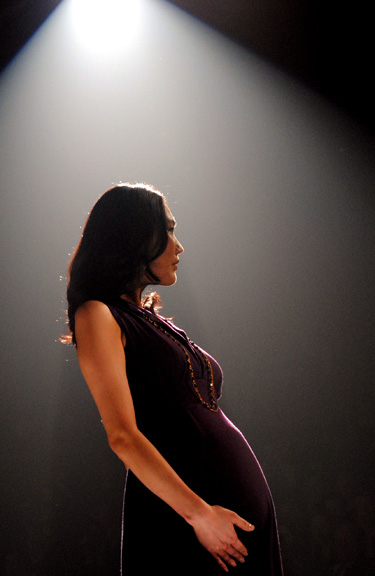 This year’s graduating class is made up of 32 students. Kwantlen’s Bachelor of Design, Fashion and Technology is the only four-year program of its kind in all Western Canada, according to the catalogue handed out at the show.

University president and vice chancellor, David Atkinson, said that Kwantlen’s program is the “best fashion department in the country.”

Based on what was seen, he might be right.

The apparel was diverse in style, reflecting the various niches of the fashion industry.

“It’s crazy to think that these designers get these ideas in their heads and can really make them come to life just from a piece of fabric,” said Heather Clark, one of the models involved in the show. “The time and effort they put into each article is amazing.”

The professional level modelling accompanied by a thunderous sound system made for a professional looking show; at one point in the night, the runway was even blanketed in fake snow.

Undoubtedly one of most memorable highlights of the night was when young female models whose cute performance was on par with the older female models.
Most notably, the trio of youngsters sported Natasha Singh’s Cotton Kids collection in their third appearance of the evening.

Another noteworthy moment was Ana Prpic’s maternity collection, 4th Phase Maternity, which was donned by models wearing fake stomachs to give the illusion of pregnancy.

The fake stomachs, according to Clark, were “almost like a backpack for your front, it straps over your arms and then has a pillowy stomach to sit on top of your own stomach.”

With a full house in attendance and great crowd reception the show was undoubtedly a success.

“The designers and operators of the show were so excited and I think it really rubbed off on everyone else,” said Clark. “I know backstage we were all dancing and getting hyped to walk the runway so I can only imagine what it was like out there!”