In an attempt to gain self-realization and a greater perspective in their lessons, 15 Kwantlen students traveled to a remote part of the Colombian Amazon, participating in a self-directed field school. 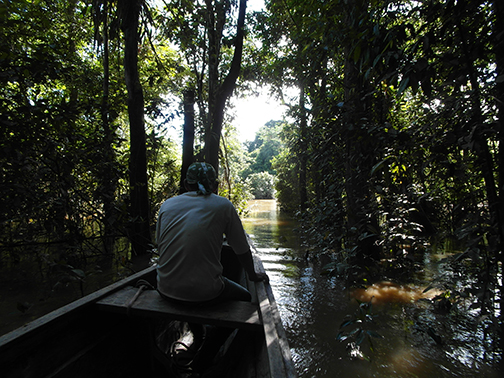 The interdisciplinary expressive arts class left for Bogota, Colombia on June 7 and returned June 23. During that period, students visited a monkey refuge, explored the region by boat and met with a shaman.

The majority of the field school was spent at the Calanoa Natural Reserve. Calanoa is a private nature reserve and sustainable tourism hub. It has the philosophy of conserving not only the nature, but also the culture of the Amazon region. Many of the experiences that students had at the Calanoa jungle lodge focused on indigenous views of medicine, spirituality and horticulture.

Students chose an area of deep interest to focus on during their time in Colombia. Some selected architecture. Others focused on anthropology. But interdisciplinary expressive arts (IDEA) instructor Ross Laird says the personal development that students undertook in the Amazon was just as important as the knowledge they acquired.

“The one thing that university doesn’t generally do very well is help students with personal development,” Laird says, “which is the one thing they really need.”

“Students spend so much time in classrooms trying to digest stuff that other people have determined is useful for them to know. And they hardly get any time to do the most important thing of all—which is find their own way.”

Laird says that last year, he was approached by Lucie Gagné, the coordinator of KPU’s interior design program, about the possibility of a trip to Colombia. Gagné had organized field schools for Kwantlen students before, including trips to Mexico, Chile and Turkey.

Gagné and Laird collaborated to make the curriculum of IDEA 3100, a class focused on creativity, match the Amazon trip. Both arts students and design students were well represented on the trip. Some students had travelled before. For others, it was their first time leaving Canada.

Student Yvonne Oetter needed one more upper-level arts class for her degree. The idea of an Amazon trip appealed to her, but Oetter had doubts about the safety of Colombia.

Besides being a hub of the illegal drug trade, Colombia has also had its share of armed conflict. An ongoing fight between FARC (the Revolutionary Armed Forces of Colombia) and the Colombian army has led to staggering brutality by both sides.

Targeted killings of political journalists and union leaders are not uncommon. Even with a safer reputation in recent years, there are still plenty of reasons to be wary of Colombia.

But none of Oetter’s fears came to pass. The most pressing problems the students faced in the jungle involved frogs in their showers and mosquitoes at night.

Oetter was deeply impressed with the way of life of the indigenous Colombian people. She says that on returning home, she started to write a blog post reflecting her experiences. She had to force herself to stop writing after 20 pages.

Students have posted their Amazon experiences on the website Deep Skill.

This trip cements the IDEA suite of courses as the most alternative take on education available at Kwantlen. IDEA’s website describes the courses as being based on “self-awareness, empathy, and character development.” Students have more autonomy over their education than in most classroom environments.

“I think I put more work into IDEA than any other course, time-wise,” Oetter says. “I put more effort in. I learn more, because I’m allowed to decide what I want to learn.”

Laird says that on the basis of the Amazon trip’s success, field schools will become an important part of future IDEA courses. Some of these trips may happen closer to home though. Laird is excited by the possibility of excursions in British Columbia by canoe and through the mountains.

Runner-Run Down: Choosing a leader in Canada and the U.S.