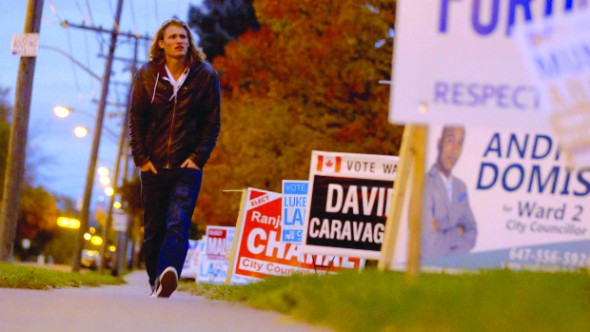 According to the Library of Parliament and Research Publications, the 2011 general election saw a 38.8 per cent participation rate from Canadians aged 18 to 24.

At a glance, these numbers seem troubling. New research shown by Elections Canada states that young Canadians are also shown to vote less and less as they age. So what is it about politics that makes young people tune out the government the same way they tune out early morning lectures?

Documentary producer and Capilano University alumnus Kyle McCachen investigated this issue at length in his film, The Drop: Why Young People Don’t Vote, and suggests that there is a lot more to this issue than an apathetic generation. While he recognizes that some young people do fall prey to the concept of “youth apathy,” the overall reason why youths don’t vote is that, according to the film,  “To them there’s more ways to communicate a message and get things done faster.”

The process to change or make legislation can be extremely lengthy, and for some people their issues are real and they believe that real change will happen with more immediate actions. Youths have historically been extremely political and the present day is no exception, according to the Kwantlen Student Association vice-president external Alex McGowan: “Youths these days are a lot more active in their communities and volunteer a lot more than past generations.”

It seems we have a paradox. Young people are more involved than ever before, but they are also less likely to vote than their older counterparts. “We were shocked that so few people knew about an election that was happening so soon,” says McCachen, after interviewing youth across B.C. and questioning them about whether or not they were going to turn out on election day. Initially, his documentary was being produced to illustrate the political process in Canada—however, he switched topics and focused on the lack of youths voting because, “the issue was fascinating, and we wanted to shine some light on the problem.”

The documentary takes the viewer to a variety of locations where co-producer and actor Dylan Playfair interviews various youth about their stance on voting. One of the most exciting settings of the film was the yearly Burning Man event, which happens every summer in the desert of Nevada and hosts up to 70,000 people. “It’s so much more than just another music festival,” says McCachen. “It’s known as being something more cerebral and more about ideas. We found ourselves a pretty wide range of people.”

The film also goes to Ferguson, Missouri, where the majority of the town’s black population is still grappling with the aftermath of the Michael Brown shooting. Ferguson had the eyes of the world upon it, as news channel everywhere portrayed the violent clashes between the police and Ferguson’s residents. Nonetheless, The Drop shows what young people are doing to make a difference in their community—most importantly by using various tools and mediums, along with a clear objective, to make the world aware of the lack of justice that so many residents have had to live with.

Interestingly, the documentary also has a strong focus on British Columbia, and the young people who call it home. The Drop chose B.C. as a sort of trial ground for the purpose of investigating why youth don’t vote. “All the beautiful shots of nature, and young people enjoying it were shot in B.C.,” says McCachen. “Young people in B.C. have a strong sense of being young and we felt it was such an honest starting point.”

With the Canadian federal election so close, and youth turnout so low, many Canadians want to know what should be done to reverse this trend. McGowan believes it’s a matter of reducing certain barriers.

“A main reason why young people don’t vote is because they face a lot of barriers. A lack of information available for them is one—we are not taught in school how to vote or fill out a voting sheet,” he says. “Young people also move a lot and may not know how to update their information, which can cause more problems when registering for voting.”

McCachen and Playfair, on the other hand, hope their documentary will help people across all ages realize why voting is so important, and how as Canadians we can help each other make sure we attend the next election.