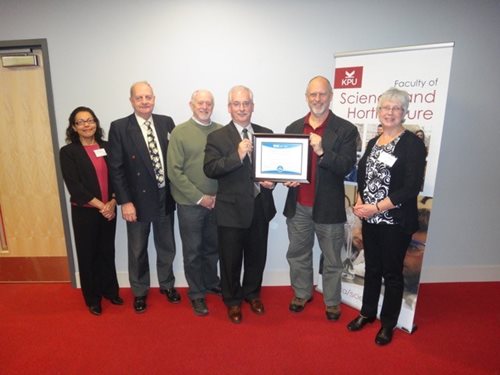 The TAC is a national not-for-profit body that consults with, audits, and oversees the accreditation of engineering technology and applied science programs across Canada. Students who graduate from an accredited program are given access to important industry organizations like the Applied Science Technologists & Technicians of BC Foundation, which provides graduates with greater employment opportunities.

“It’s very important because it’s a form of quality control,” says Paul Richard, who chairs the EPT at KPU, and was involved with the submission for accreditation from the TAC. “[The TAC is] somebody who’s totally independent, who takes a look at what we do and what we claim to deliver in terms of outcomes and says ‘yay’ or ‘nay’.”

“It forces the program to remain current, to deliver the practical stuff that’s expected in the workplace, as seen by the accreditation body,” he says.

In order to be granted the accreditation, a program must be judged by its ability to meet a number of criteria set by the TAC in a given discipline category which, in the EPT’s case, is Environmental Engineering. For example, the program being audited must demonstrate that it can meet its prescribed learning outcomes, that students can successfully identify lab errors, and that they can plan and carry out an independent research project. To display this, a variety of student work was submitted anonymously to the TAC exhibiting a range of performance, from exemplary to just barely passing.

“One thing that surprised me,” says Richard, “was the degree to which the accreditors were able to look at the program from the outside and make some positive criticism. They could see opportunities that we may have missed because we are too close to the day-to-day delivery.”

The TAC auditors suggested that the EPT should create a clear and comprehensive grading rubric that students would have access to, and this has since been implemented into the program. The TAC also inspected the labs and school facilities, as well as other things that reflect on the quality of KPU overall, such as the computer labs and the libraries.

“Not having accreditation means that it’s easier for a program to become a bit stale and to be less relevant,” says Richard. “The flipside of that, obviously, is that with accreditation, we’re given the confidence that we’re in the right place, we’re going in the right direction.”

The TAC accreditation lasts for five years, and stands for that duration unless any major changes are made to the program. The TAC’s audit also happened to take place over the same period of time as the EPTP’s own five-year internal review.

“There’s an interesting amount of juggling in between the two,” says Richard. “Some of the things that I found in the program review that were missing the boat a bit was because I was looking at the boxes from the accreditors that I couldn’t tick off.”

Besides the minor TAC suggestions that have already been implemented, the EPT is not going to undergo any big changes any time soon.

“It’s not like the accreditation dictates what we do,” says Richard, “we’ll still keep the core of what we’ve always wanted to do, but it’s a nice form of signage towards improvement.”