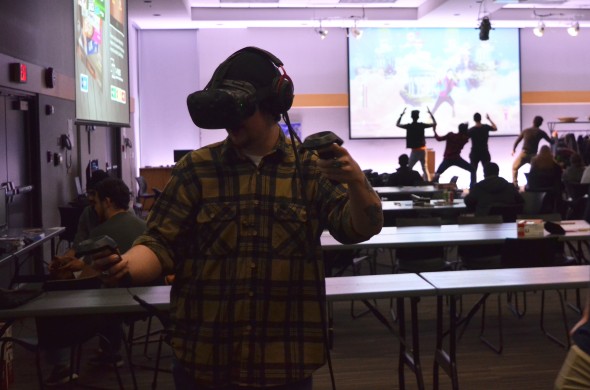 The Cedar Conference Centre on KPU’s Surrey campus was filled with gamers looking to indulge in video games, tabletop games, and free pizza at the Kwantlen Gaming Guild’s fourth annual Multiplayer Madness event. Students were invited to participate in any of the available games, which included dancing games, virtual reality, cards, and the ever-popular Super Smash Bros. games.

Though past events featured competitive tournaments with prizes and raffles, the KGG decided to go in a different direction this year, cultivating a more recreational and informal atmosphere than the last three events. The day was overseen by leading members of the Guild, including the KGG President Murdoch de Mooy.

“It’s almost your last week of school,” says de Mooy. “You need you to get out and relieve a little bit of stress…Any game that you enjoy, there’s somebody else here who enjoys it too.”

With over 600 members, the KGG has the largest membership of any club at KPU, and Multiplayer Madness is one of the university’s most popular events, drawing hundreds of attendees every year.

“Back in the day, when the Kwantlen Gaming Guild started up, we decided to have this event and we asked for like 50 bucks for pizza and pop, and it was such a success,” says de Mooy. “The KSA had to do an emergency request for more funds—they blew through all of the new club funding caps because of us and it became such a hit. Basically it was the foundation of what we are today.”

According to de Mooy, the KGG has attracted at least 100 new members this year, and that number is likely to increase once the KGG gets its own dedicated space in the newly renovated Birch building. Before the renovations started, the Guild was using the university’s social justice space to hold gatherings.

“We were the main hang-out people,” says de Mooy. “A lot of people considered it to be the KGG room, which was something that we did not consider it [to be] ourselves…It was basically a safe place to go and talk about games and hang out with your friends and stuff like that. Without that room, it’s a huge negative for us.”

The KGG has been meeting in the cafeteria and occasionally using the TV there while they wait for the new space to be finished.

“The ability to have a space to share with other people like myself and having that kind of community was really, really important,” says Tanvir Singh, former president of the KGG, who now serves as the VP Services for the Kwantlen Student Association. “Before the KGG, I was kind of a ‘go to class, finish up class, and go home’ type of student. After getting involved in the KGG and getting involved on campus I was really able to have a better student experience in general.”