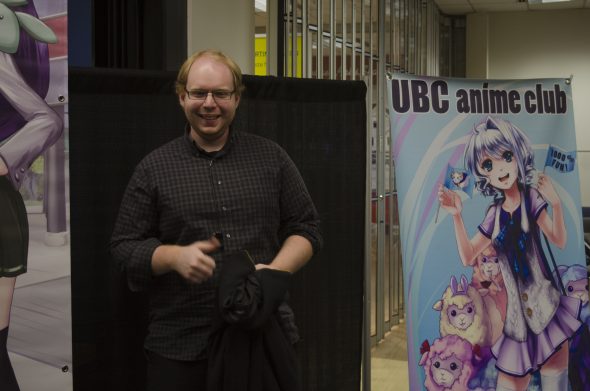 The club was founded in November by Murdoch de Mooy, Kwantlen Student Association Faculty of Arts Representative, after he was contacted by a UBC librarian who asked if KPU had an anime club of its own.

Up until that point, the university had never had a club dedicated to watching and discussing Japanese animation. De Mooy saw this as the perfect opportunity to explore his love of anime with like-minded students at KPU. He says that he found signatories and sent away the paperwork almost immediately.

“We became an anime club within two or three days,” says de Mooy.

This wasn’t his first experience with leading a club. De Mooy has previously been involved in the Kwantlen Gaming Guild as an executive member and event organizer, and he says that the experience he gained there helped him create the new anime club.

Shortly after it was founded, the KPU Anime Club was invited to join a potluck with the UBC, SFU, BCIT, Langara, and Capilano University anime clubs. The event took place on Nov. 18 in the Great Hall on BCIT’s Burnaby campus.

“This was really a way to dip our feet in the water and try things out, and see what all of the other universities do,” says de Mooy. “It was very interesting to see how KPU does stuff differently than BCIT and SFU and UBC.”

Attendees brought food, video games, card games, and different kinds of anime-related merchandise. There was also karaoke that started at 7:00 p.m., which drew out an enthusiastic crowd of singers and audience members.

“When you hear a song that you really like, you just get really into it,” says Justin Ho, a member of the KPU Anime Club. “Everybody comes together for that and nobody judges which songs you sing. You can just go and have fun.”

Like most other people at the event, Ho’s love for anime started in his youth, and he’s happy that the KPU Anime Club has given him an opportunity to meet other fans of the genre.

Matthew Clemente, another member of the anime club and a friend of Ho’s, says that he joined for the same reasons.

“I was interested, when I was a kid, with Pokemon and Sailor Moon,” he says. “Then I stopped in high school for some weird reason. Probably because … when you’re in high school you tend to conform to stuff. But in college, you don’t really care what people think.”

Club members are hoping to organize more collaborations with other universities in the future, as well as movie nights and panel discussions about anime and manga.

“So many people view anime as a child’s medium because it’s a cartoon,” says de Mooy. “But anybody who really gets into anime knows there are all sorts of genres and age groups.”

He hints that even though he may need to leave the group in the future, he’s confident that the other members will be able to continue to run the Anime Club and facilitate events for future KPU students.