Vertical Farming is on the Rise in Abbotsford

Construction on one of B.C.’s first vertical farms will be complete next October 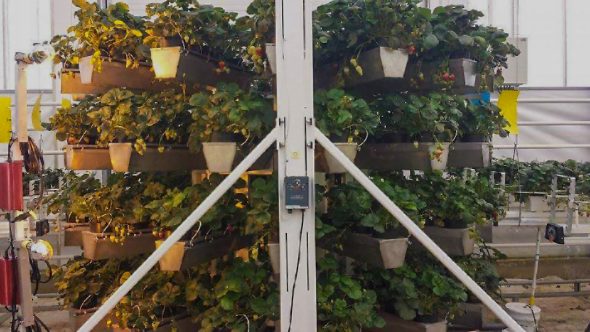 While the method of building farms vertically becomes more popular, Kent Mullinix of KPU’s Institute for Sustainable Food Systems worries it may be a step in the wrong direction. (Submitted)

As the effects of climate change and overpopulation become more and more apparent, traditional farming methods seem less likely to provide long-term sustainability for our planet.

One potential method of addressing this problem is with a concept called “vertical farming,” which packs more agriculture into a smaller land area by building upwards, much like a densely inhabited high-rise condo. Next October, Abbotsford will become home to one of the few vertical farms in British Columbia when construction on a 10-acre farm at 34240 Page Road is completed.

Nick Brusatore, CEO of the farm’s developer, Vertical Designs Ltd., says that the project will consist of 32 towers, each 20 feet tall and housed in a 35-foot tall building. The farm is estimated to cost between $2.5 and $2.7 million.

The company has partnered with Affinor and a California strawberry farm for what Brusatore calls an “on-farm test agreement,” or a trial run after which, if all parties are satisfied, production will increase significantly.

Organic strawberries will be the sole product grown at the Abbotsford facility, and through a contract signed with Discovery Organics, all of the strawberries have already been sold.

“We expect to produce probably the best strawberry on the planet,” says Brusatore.

He is unsure where exactly his strawberries will end up, but says that he would be surprised if the first batch makes it outside the city. Eventually, though he hopes to “produce all the strawberries for Canada” from the Abbotsford location.

“We’ve got a problem right now,” says Brusatore, referring to the state of local and global agriculture. “We’ve got a food shortage, we’ve got a water shortage, and we’ve got no governance as to the pesticide use and the way things are manipulated through labels.”

According to Brusatore, the Abbotsford vertical farm will produce zero water waste, require zero pesticides, and will utilize the land 10 times per square foot more efficiently than conventional farming techniques.

Despite the possible benefits of this technology-based farming system, Director of the Institute for Sustainable Food Systems at KPU Kent Mullinix believes that vertical farming is a step in the wrong direction.

“It’s about money. It’s not about feeding the world,” says Mullinix. “It’s really appropriate for the cultivation of just a few high-end crops like salad greens and some more valuable vegetables, so it’s really primarily a system to satisfy high-end markets with very high-end production methods. It’s the antithesis of sustainability if you ask me.”

Instead of investing in vertical farms, Mullinix argues that the key to sustainability is a decentralized, ecologically-focused network of regional food systems that create local economies and jobs.

Mullinix is also concerned that the proliferation of vertical farming will lead to valuable agricultural land being paved over.

In response, Brusatore argues that vertical farms can be developed on contaminated land that is no longer ideal for conventional farming. He acknowledges that vertical farming is mostly suitable for low-growing plants like kale, lettuce, and strawberries, but says that the project is nevertheless a progressive step for the future of agriculture.

“If we don’t try, if we don’t press these issues, we’re just going to fail for sure,” he says. “I’m excited for Abbotsford …. It’s going to be absolutely amazing and people are going to be blown away by this once it’s up.”

Although it is a capital-intensive project to launch, he points out that, once built, the equipment on the farm will be long-lasting and will require little maintenance.

After the farm is completed and the method is proven successful, Brusatore expects that there will be a significant increase in capital investment in vertical farming, creating a positive effect on the local economy.