The performances will explore and celebrate First Nations art 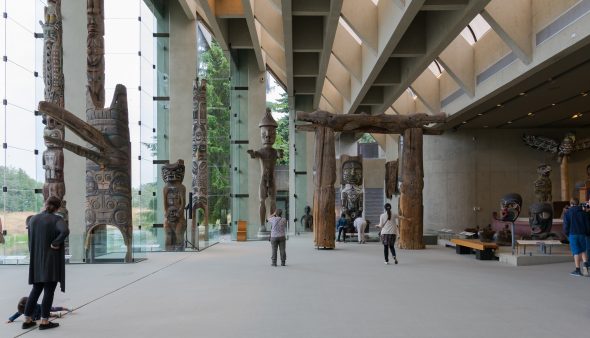 The Museum of Antropology at the University of British Columbia. (Wikimedia Commons)

For the many distinct Indigenous groups of the Pacific Northwest, dance is more than just an art form. It is a medium through which history has been passed down over generations. It preserves the stories, both past and present, of Indigenous people.

From Feb. 27 to March 4, the 11th annual Coastal First Nations Dance Festival, presented by the Dancers of Damelahamid, will take place at UBC’s Museum of Anthropology, located on the unceded territories of the Musqueam people.

The event will focus on sharing the beautiful and distinct dance practices of Indigenous people from the Pacific Northwest and across the world through a series of workshops, performances, and lectures.

“What I think is unique to the festival, and something that is shared within that space, is that people get to see the diversity of Indigenous artistic practices, and I think that, generally speaking, we have a very limited understanding of what that means,” says Margaret Grenier, the festival’s director and a member of the Dancers of Damelahamid.

“I think it helps to break down the shared colonial history that we all have, but also to really open up what identity everyone is offering within today’s context,” she continues.

A total of 18 performances will take place throughout the week, including individuals and groups from Washington State, British Columbia, the Yukon, Alaska, and even some visitors from outside of the Pacific Northwest region.

Grenier and the Dancers of Damelahamid are among the West Coast performers at the festival. Others from the West Coast include the Yukon’s Flying Gwitch’in Fiddler Boyd Benjamin, a masked Haida dance troupe called the Rainbow Creek Dancers, the Coastal Wolf Pack—a Coast Salish group consisting of 50 members—and Alaska’s David Botsley performing with his group, the Get Home Dancers.

Other guests include Stina Therese Lorås Hessaa, a Coastal Sami artist based in Norway, Peter Espiritu, a Hawaiian dancer who will focus on contemporary and traditional Indigenous dance, and Charlotte Qamaniq and Kathleen Merritt, both originally from Nunavut, who will perform traditional Inuit throat singing.

Although the festival has only taken place in its present location since 2008, there was a predecessor in Prince Rupert run by Margaret Grenier’s parents, Ken and Margaret Harris, from the 1960s to the 1980s. The original festival was created to revive dance practices that were lost following the Canada-wide potlatch ban which lasted from 1885 to 1951.

Having witnessed the rebirth of these dance practices, Grenier was inspired to bring the festival back to life in Vancouver.

“It was a big part of the reason why I wanted to begin the festival again and have an opportunity for future generations to have the experience that I grew up with,” she says.

Several performances will be covered by the cost of museum admission, including youth outreach workshops and school group performances held during the week. Additionally, two separately-ticketed events will be held on the weekend.

There will also be a discussion panel taking place on the evening of Thursday, March 1.

“I’m really excited about that because Terri-Lynn, Morgan Davidson, and Robert Davidson, as well as Peter Espiritu and Steena Hessaa, are all going to be on the panel and sharing a bit of their background in the work that they do, and they’re all really beautifully established artists,” says Grenier.

Grenier says that reviving practices that were nearly—or in some cases, completely—lost to colonization has been “a work of the heart.”

“It’s a really beautiful expression of how we’ve been able to maintain the essence of what the stories have provided for many generations,” she says.