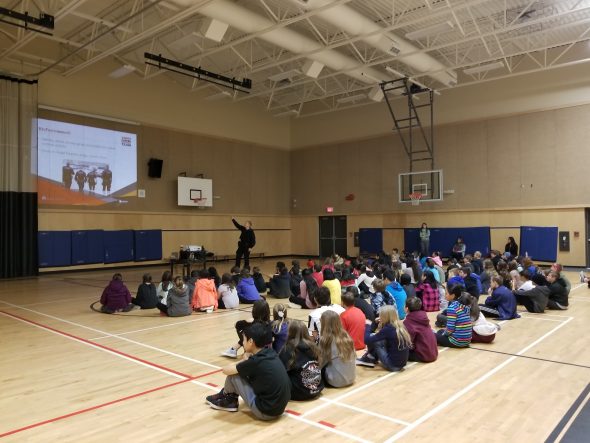 The Surrey Gang Enforcement Team is showing anti-gang presentations to students in elementary schools, as a part of the “Shattering the Image” program. (Surrey RCMP)

The RCMP’s Surrey Gang Enforcement Team has been delivering presentations to school communities in Surrey that aim to educate students—particularly those in grades six and seven—about the hazards of getting involved with criminal gangs.

The outreach initiative, Shattering the Image, was started in the fall of 2017 to dispel the myth that gang activity is glamorous.

“These sorts of things are exactly what police should be doing when it comes to building relationships, not just with the community but specifically with schools and with kids in order for them to be empowered to make good choices over the next five, 10, 15, or 20 years, and in order for them to recognize some of the dangers related to gangs, drugs, and drug dealing,” he says. 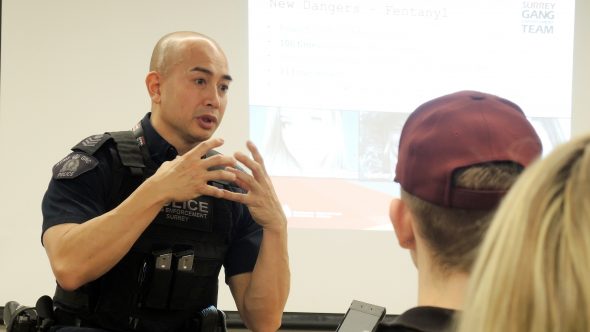 Sgt. Mike Sanchez from the Surrey Gang Enforcement Team talks with students as part of the “Shattering the Image” outreach program. (Surrey RCMP)

The Shattering the Image presentation discusses how social media is increasingly being used to recruit youth as gang members, oftentimes while they’re still in elementary school.

“We know from talking with police across the province, as well as teachers and councillors and community workers, that kids as young 10, 11, and 12 are being recruited into this lifestyle,” says Houghton. “This is what’s happening in our communities and in and around our schools, and it’s important that the public be aware of this and the issues around it.”

The presentation addresses the practice of what the RCMP calls “dial-a-doping,” which they believe is one of the most common ways that youth participate in gang activity.

Dial-a-doping, or the “pizza delivery of the drug world” as Houghton calls it, involves buyers calling a predetermined phone number or contacting a drug seller through social media like Snapchat in order to establish a time and place to organize a drug deal.

According to the Combined Forces Special Enforcement Unit for the province, gang members will often task newly recruited youth with delivering the drugs, which can put them in potentially dangerous situations.

Houghton says that parents have described finding their children with cash from unexplained sources, small quantities of drugs, “scoresheets” or accounting notes for drug-selling activity, and even weapons.

A video produced by End Gang Life that was tweeted by the Surrey RCMP says that drug traffickers comprise 73 per cent of gang murder victims.

Another main goal of the Shattering the Image program is to debunk the myths that glorify gang lifestyles.

“You’re going back through decades and decades of social media, movies, music, television, clothing. All of those things contribute to that lifestyle,” says Houghton. “But no single one of those things causes kids to get involved in gang activity.”

He says that poor school performance, lack of connection with peer groups, and leaving home at odd times are some of the signs that a young person is getting involved with a gang.

“In isolation, these things may not mean that your child is involved in this activity, but in aggregate, it may lead to something else,” says Houghton. “So become educated and don’t be afraid to ask for help.”