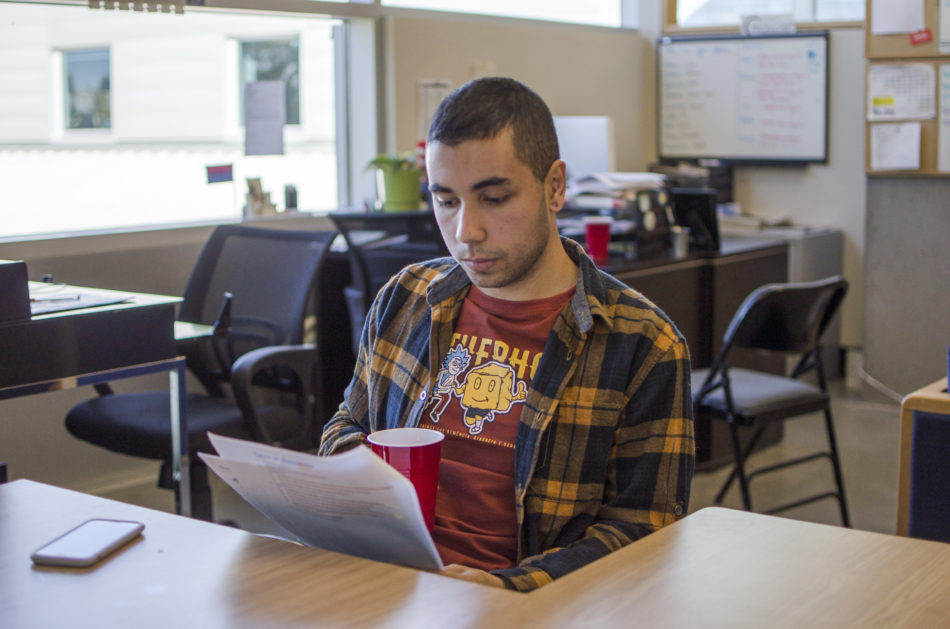 KPU International student Fernando Cilento wants to work in Canada as a writer after graduating from the journalism program. (Braden Klassen)

A new policy paper published by the Canadian Alliance of Student Associations (CASA) is calling on the federal government to provide additional support to international students studying at post-secondary institutions across the country.

The report, entitled “Value Beyond the Dollars and Cents: International Students’ Contribution and Their Need for Supports”, examines the benefits that international students bring to Canada and points out areas where the government can be doing more to help them. It also identifies a number of obstacles that could keep international students from achieving a quality post-secondary education experience in Canada, including a lack of social and financial support, fewer work opportunities, and difficulties with pursuing Canadian citizenship.

For instance, the paper notes that, after graduation, international students are given a 90-day deadline to find a job required for a work permit, which is much shorter than the average four and a half to five-months it typically takes for graduates to find work.

Kwantlen Polytechnic University’s most recently published student profile from 2017 states that 18 per cent of the student body—close to 3,200 students—are international. Notably, these statistics were gathered before the surge of international enrolment at the beginning of 2018 which contributed to KPU’s decision to cut off all international student applications until January 2019. This means that the number of international students attending KPU this fall is likely higher than it ever has been.

“What we’re starting to see is that many universities across the country are starting to take in more and more international students,” says Adam Brown, Vice President External of the University of Alberta Students’ Union and the Chair of CASA. “Students [from other countries] are starting to look at Canada more as a viable place to get a quality post-secondary education, but when they get here they can run into a number of barriers such as accessing work permits, student financial aid, or the difficulties in the pathway to citizenship.”

The CASA report quotes a 2016 Global Affairs Canada study which revealed that, in 2014, international students contributed approximately $11.4 billion to the Canadian economy through tuition and other spending. An updated version of the study reports that, in 2016, the total contribution had risen to approximately $15.5 billion.

In March 2018, the KPU Board of Governors voted to increase international tuition by 15 per cent.

The KPU International office also offers services such as orientations, academic and non-academic advising, translation and educational resources, and events to foster a sense of community for international students.

“While much of the CASA policy paper contains recommendations for the federal government, Kwantlen Polytechnic University (KPU) agrees with its view that international students benefit Canadian universities by bringing a global voice to campuses and creating ambassadors who can talk knowledgeably about Canada abroad,” wrote Ferreras.

Fernando Cilento is a KPU international student from Brazil who came to Canada on exchange from Mackenzie University in Sao Paolo. Cilento decided to stay in Canada in order to pursue a degree in journalism with a minor in political science and became an international student after the term of his exchange finished. He says that KPU International helped him with this transition, but notes that paying his tuition has still been a struggle.

Cilento currently works at the Grassroots Cafe on the Surrey campus, which helps him cover the costs of living and going to school. After graduation, he plans to find work in Canada and apply for permanent residency.

“I consider myself really lucky. I couldn’t be more thankful to Grassroots because it has allowed me to stay here,” he says. “There are a lot of students who are looking for jobs and they don’t know [if they can stay] because the bills keep coming every semester and they need to pay.”

Cilento says he has paid more than $5,000 to enroll in three courses this semester, and that he would take more courses if he could afford it.

“You have to hold Kwantlen accountable,” he says. “If they’re taking all of this money, they have to provide an equal service—it’s only fair. After all, we’re not paying a small amount of money. I think that providing a service that’s of good quality is their duty.”

According to the Canadian Bureau for International Education, Canada is one of the most popular destinations for students who want to attend post-secondary school abroad. Between 2010 and 2017, the number of international students in Canada increased by 119 per cent.

“Canada is seen as a country where the people are polite, and it’s multicultural country that has all these diverse ethnicities,” says Cilento. “I don’t see myself living in Canada for the rest of my years, but I don’t see myself going back to Brazil in the near future.”

Brown says that it will take some time before any or all of the recommendations in the policy paper can be implemented, and that it will depend on the level of the federal government’s involvement.

“There’s no one timeline that we could [use to] say, ‘This is how long it is going to take to get everything done,’ because first we need to make sure that political parties are listening to what we’re saying and are including these in their policies or even their platforms as we approach the 2019 election,” he says.

He continues, “Parties are starting to look at how they’re going to build their platforms. The thing to consider is that, even though international students can’t vote if they’re not Canadian citizens, they still carry a lot of weight because they can talk to other domestic students and they contribute a lot to our campus communities, classrooms, and economy.”