The Dangers of The Amazon

Jeff Bezos is changing the game, but he also might be breaking the rules 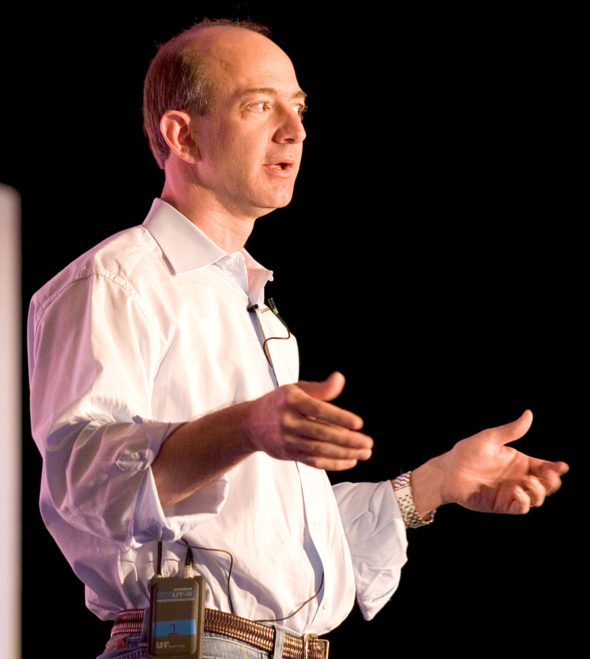 Jeff Bezos, CEO of Amazon, is one of the richest figures in the world – but can he buy our trust? (flickr/James Duncan Davidson)

Jeff Bezos’s net worth reached a staggering $150 billion on July 16, finally granting him the title of the world’s richest man. Bezos is the owner and founder of Amazon, the largest online commerce company in the world, which offers an expansive catalog of products from technology to groceries.

By diversifying his areas of investment, Jeff Bezos had embodied the spirit of his company. An abridged list of his popular acquisitions includes Whole Foods, Goodreads, Audible, IMDb, and the Washington Post.

One individual having this level of control over the consumer market is immediately concerning, and even though Bezos is not necessarily known for having “bad” character, that should not excuse him from being watched.

Through his acquisition of the Washington Post, he holds the power to censor a major media outlet. In 2016, Amazon acquired a patent to develop cage-like “workstations” for warehouse employees to use when transporting packages. The idea was quickly shelved after media criticism brought it to the public’s attention, but if Bezos had bought out the outlets that had chastised Amazon, it’s possible that the company would not have received the same amount of negative attention.

Buying the media seems like somewhat of a trend among billionaires. Marc Benioff, the CEO of Salesforce, recently purchased Time magazine, and Laurene Powell Jobs holds a majority stake in the Atlantic. This is important to highlight because almost all media has an agenda, and the public needs to know who has the final say in what is being published or broadcast.

Maybe people like Bezos, Benioff, and Powell Jobs are buying these outlets simply for business purposes, but the prospect that their investments could be used for more sinister purposes is always there.

In a memo to the Washington Post staff, Bezos expressed that “change” would be coming to the newspaper. He said that experimentation would be needed, but at the time did not express what was actually being planned. So far, he has made simple alterations such as lifting a paywall for online local newspapers, but in the future, he could make changes that might hurt journalism.

An interesting fact about Bezos is that, even though he is famous, he is not exactly a household name. He doesn’t have the revolutionary pull of Elon Musk, or the well-known charitable contributions of Bill Gates, leaving him somewhat in the shadows. His actions typically fly under the radar, which grants him the leniency to make major decisions that affect the consumer market without receiving much attention.

Jeff Bezos has changed the world, and for the most part, the fact that he has done so is admirable. But those who wield a gigantic amount of power must be viewed with suspicion. Power can always be used in negative ways, and it is the responsibility of regular people to be on the watch.