The lab is “powered by curiosity and a desire to educate” 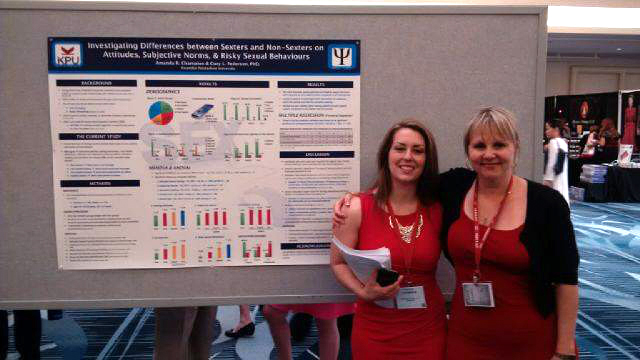 At Association for Psychological Science, the O.R.G.A.S.M. lab shows off their posters (submitted)

KPU psychology instructor Dr. Cory Pedersen created a lab in 2007 to develop projects for her class on adolescent development and human sexuality. It wasn’t until 2011, however, that it developed into the Observations and Research in Gender and Sexuality Matters (ORGASM) research lab.

“At that time, the lab was reinvented to include any student with an interest,” says Pedersen.

The lab primarily conducts online surveys in order to preserve the participants’ anonymity because, according to Pedersen, there is still a stigma against overtly discussing sex and gender. Amanda Champion, current lab manager and KPU alumni, describes this attitude as “squeamishness,” noting that it prevails even though sex is an important facet of life for most adults.

Currently, some studies being conducted in the lab are accepting participants, including one called “Why Send a Dick Pic?”—the title of which largely speaks for itself. If you are a straight male over the age of 16, you are welcomed to answer this question through a fully anonymous forum.

“We want to understand the different motivations men may have for sending unsolicited pictures of their genitals to others,” reads the lab website.

Pedersen explains that sexology research is often disproportionately heteronormative, so the ORGASM research lab’s staff makes sure its work does not pertain exclusively to those in heterosexual or monogamous relationships. Some findings which directly address underrepresented communities include, “Disability, Sexuality, and Gender” and “Evidence of Binegativity.” 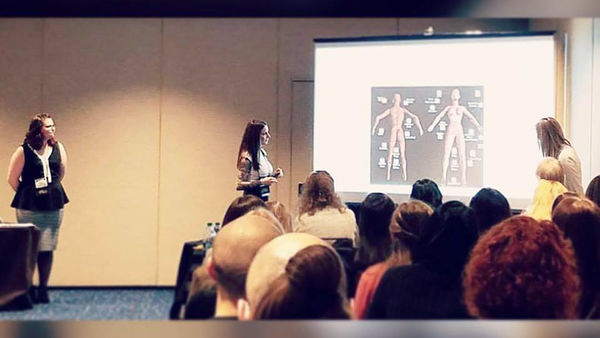 The O.R.G.A.S.M. Lab presents their research at Society for the Scientific Study of Sexuality (submitted)

“We have had several studies published in peer-reviewed journals—eight published and three in review as of right now,” says Pederson. “ I don’t know that any are necessarily breakthroughs, but rather, [they] build on existing work and address limitations of previous findings.”

The lab has also presented the results of 18 of its studies at a number of academic conferences, including those held by the Western Psychology Association, the Association for Psychological Science, and the Society for the Scientific Study of Sexuality.

“Our first publication determined that, contrary to the popular zeitgeist, exotic dancers did not differ from non-exotic dancers on measures of extraversion, neuroticism, or attitudes and sexual behaviors,” Pederson explains.

Champion, who will be attending a Society for the Scientific Study of Sexuality conference for the second time this year, says that working in the lab has “completely beefed up [her] resume.”

“It has been an extremely enjoyable and educational experience and I recommend [that students who] are really research-focused try and get involved in a research lab,” she says.

The meetings held in the lab generally pertain to project development, status updates for ongoing work, task delegation and distribution, and practicing for presentations or statistic interpretation. If any KPU students are interested in applying for a position as a research assistant for the lab, they can reach out to Pedersen at cory.pedersen@kpu.ca.