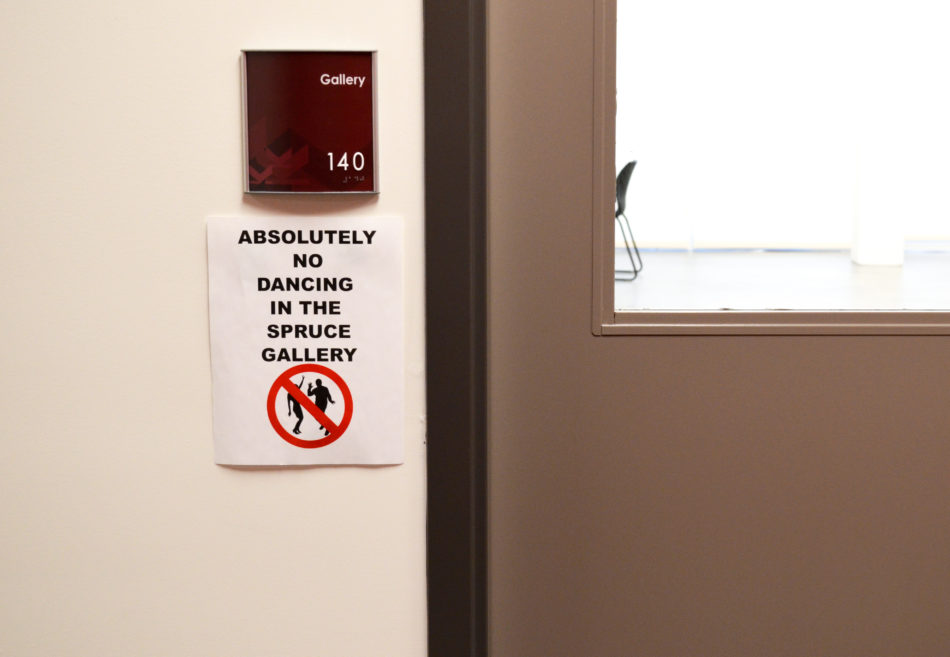 You can dance if you want to, but if you’re doing it in the third-year gallery space in the Surrey campus Spruce building, you might have to leave your friends behind.

Recently implemented signage declaring that there should be “No Dancing in the Spruce Gallery” is to ensure the safety of the carefully crafted art on display in that area. The gallery showcases the work of third-year open studio students, including finely crafted paintings, digital art, performance pieces, and fragile sculptures and ceramics.

If a dancer were to damage one of these works, it could be devastating to the artist. Since the building opened in September of 2018, art students have been disgruntled with continuous misuse of the space. According to third year fine arts student Alison Laura Curtis, Bhangra dancers have been the most frequent unexpected visitors to the gallery.

She says she recently brought a guest to view her work which was displayed in the gallery. When they arrived, the art was being obstructed by several dancers, and Curtis felt too awkward to ask them to leave the space.

KPU has a Bhangra club and offers a Bhangra course as part of the cultural studies programming, but whether or not the dancers are students is unclear as the Spruce gallery space is open to the public.

“It was not my favourite thing to have to say that [they couldn’t dance] because I love dancing and if I had it my way we would be able to dance everywhere, but it was potentially disruptive,” says Jenn Tiles, a member of the fine arts faculty who created the “No Dancing” signage.

If students are looking to bust a move, Tiles suggests considering some of the bookable rooms or open corridors at KPU where dancing can be celebrated.

“Dance in the Spruce atrium! We would love to see performances in that space because it is more open,” she says. “Usually when other departments use that space they contact us to book the time … but I don’t think these [dancers] did that.”

While the Spruce atrium is a more fitting location, the acoustics of that area could also be a cause for concern as sound carries to other areas of the building where it could be potentially disruptive to those in class.

Since being posted, the signage seems to have had the desired effect on dancers. Although dancing may not be welcome in white-cube galleries such as the one in Spruce, hopefully the Bhangra advocates keep on dancing the night away, dancing in the moonlight, or even just dancing in the dark.

Legitimately useful ways to cool off this summer