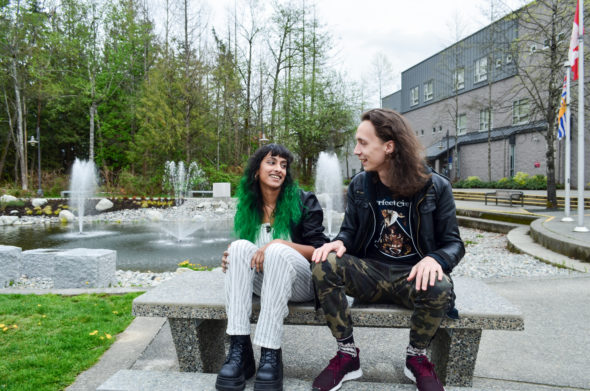 As part of Litfest New West—an annual festival that brings together readers, writers, and community members from New Westminster and the surrounding area—a literary performance workshop called “You’re A Performer, But Also A Writer!” is being hosted by KPU students Chelsea Franz and Tawahum Bige.

On Saturday, April 27, in Room 411 of Downtown New Westminster’s Anvil Centre, attendees will learn to overcome the pressures of performing live through connecting with their body, finding their voice, and honoring the ceremonious aspects of performance through an Indigenous lens.

“If you’re trying to be a writer and you’re nervous to get on stage, this would be a perfect opportunity to find your shoes and step into them,” says Franz.

Aislinn Hunter, an instructor in KPU’s creative writing department, suggested that Franz and Bige apply to run a workshop because they are both long-standing members of literary communities both on and off campus. The two have also worked collaboratively many times in the past.

“I call him my work husband. We end up doing a lot of projects together,” says Franz. “He has always been super supportive and super encouraging of the work and building community and supporting the words of local artists and youth.”

“It’s an honor to be doing this work with someone like Chelsea Franz, who I’ve witnessed explode as this amazing creative writing organizer on campus,” adds Bige. “Whether it’s for pulp MAG or slam or anything on campus, she kind of single-handedly made a community come up and now we get to run workshops together and it’s really cool to work with her.”

The workshop will focus on being mindful of your body, an important aspect of performance influenced by traditions in Dene and Cree culture, both of which are groups that Bige belongs to. Tips such as physically shaking off negativity or taking strategic breaths can help an artist to remain aware and relieve stress, for example.

Still, in Franz’s opinion, awkward or human moments during performances can help the audience connect with an artist. That theory was put into effect during a workshop at an Aldergrove high school, when KPU’s representative for the Canadian Independent Poetry Slam, Mariah Negrillo-Soor, stopped mid-performance to blow her nose.

“There’s an idea that a performance has to be perfect and super well rehearsed,” says Franz. By contrast, she describes Soor’s sneeze as “purely human.”

The workshop will be interactive, and attendees are encouraged to bring at least one short or medium-length piece that they are willing to share. Bige and Franz hope to work with folks individually to “give them feedback [and] build on their strengths.”

This year, Lit Fest New West will be taking place on April 26, 27 and 28. Workshops will be hosted at Anvil Centre, Old Crow Coffee Co., 100 Braid St. Studios, and River Market. There is a short story competition, poetry slam, and a flash fiction workshop hosted by KPU Creative Writing Instructor Cathleen With.

Unfortunately, the workshop being hosted by Franz and Bige is already sold out.

“I’m a little nervous to be honest,” says Bige. “I don’t know what sold out means in terms of how many people [will be there], but I think it’s really cool that so many folks are wanting to know more about lit performance.”