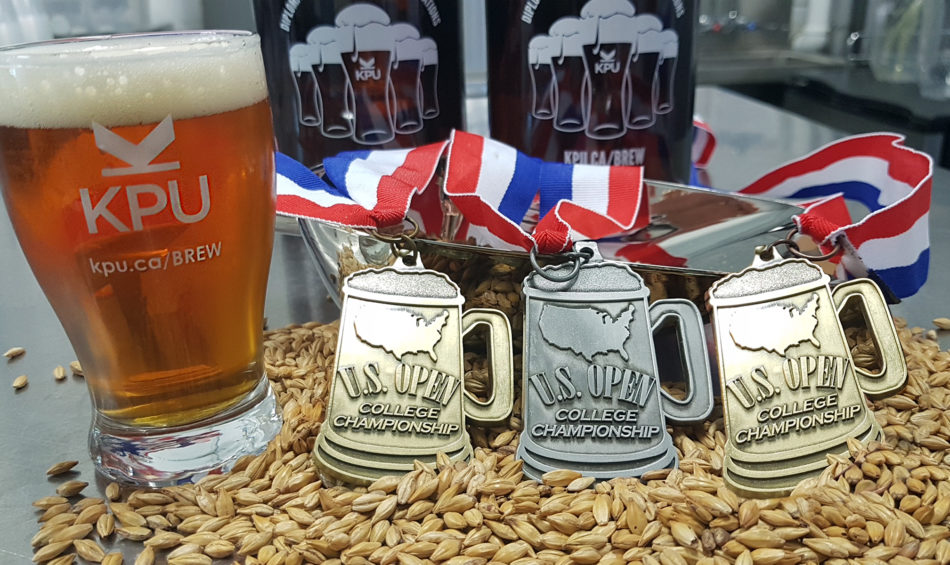 Although there may be nothing quite as satisfying as cracking open a cold one with the boys, winning an international championship with the boys might come as a close second.

Despite being the newest program in the competition, the KPU Brewing and Brewery Operations program took home two gold medals and a silver out of five possible categories at the U.S. Open College Beer Championship, and achieved the highest honours overall.

“It was great to win for B.C. and for Canada,” says Alex Egi, program chair and brewing manager for the KPU team. Out of the 14 schools in the competition, KPU was only one of two institutions representing Canada, alongside Ontario’s Niagara College.

According to Egi, winning the Beer School Championship “not only shows that students in the program are working really hard, but reinforces the fact that we are providing students with a high-quality education.”

He adds that KPU is the only Canadian school recognized by the Master Brewers Association of the Americas for excellence in teaching. This is particularly impressive when you consider that the brewery has only been in operation for less than four years, and took second place in 2017 with its first submissions to the College Beer Championship.

Egi explains that there is a balance of artistry and science that goes into brewing craft beer.

“I definitely would put more emphasis on science,” he says. “To be a professional brewer, you have to understand the chemistry and microbiology. You have to understand how the machinery works, so there’s even an engineering aspect. But with all that, creativity is still important. You still have to be inventive.”

The five competition categories in the U.S. Open College Beer Championship were Belgian, Bavarian, India Pale Ale, Stout, and an open category for suds of any style. Certified beer judges evaluated the beers based on attributes such as aroma, appearance, colour, foam, carbonation, flavour, mouthfeel, and overall impression.

“There was no category for North England IPA, so that’s one we needed to submit to the open category, but it’s also one of the beers that won us a gold medal,” Egi says, referring to “Fruity and the Yeast”, which was brewed by second-year students Wes Bain and Daryl McDonald.

Kyle Grohs and Joe Mallison’s “50/50 Hefe” won the gold medal in the Bavarian category, while the silver medal for “Storm Stout” was won by Danilo Chiga and Felipe Freire. Each of the winning students are in their second year of the program.

Although members of the KPU community may be disappointed that these winning brews have long since been sold out, nearly identical styles are being brewed twice weekly as part of the brewing program’s practical brewing course, with only minor “tweaks” in the recipe and brewing formula to maximize taste and quality.

Egi maintains that, at only 200 litres in capacity, the KPU brewery is not designed for making profits on beer volume, but for teaching and education.

“Sales are mostly to promote the program and to showcase what we’re doing,” he says.

Egi is keen to extend an invitation to anyone curious about either the program or the product.

“We offer free tours on Fridays as well as free samples,” he says. “Remember to bring a growler in case you try something you like.”