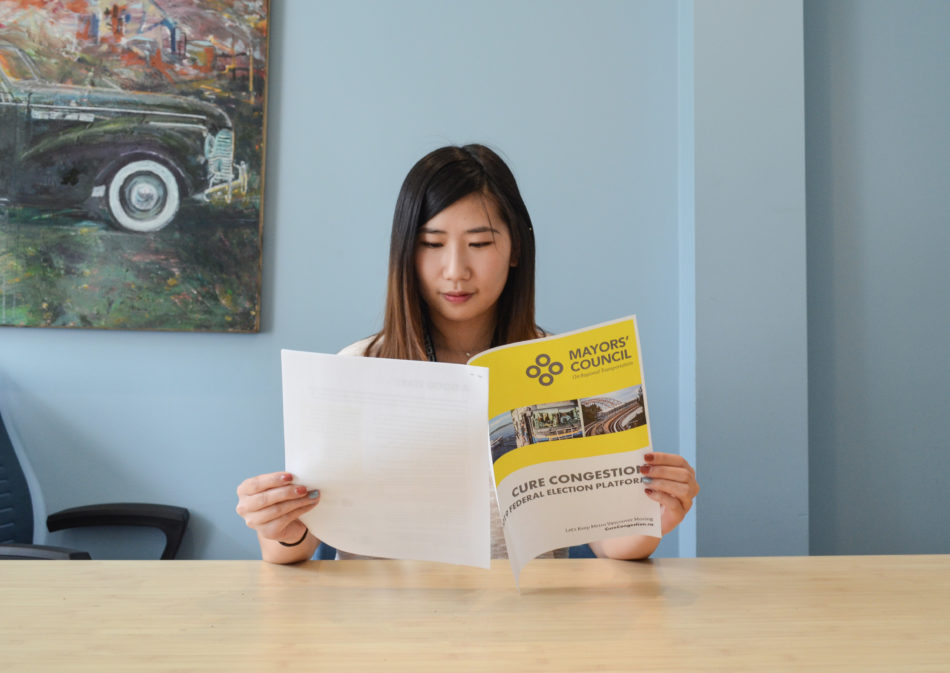 Representatives from the Mayors’ Council on Regional Transportation gathered with federal party members and leaders to discuss securing government funding for transit expansion projects in Ottawa earlier this month.

As part of “Transit Day on the Hill”, the Mayors’ Council representatives met with members from all parties—including NDP leader Jagmeet Singh and Green Party leader Elizabeth May—to ask whether parties would support adopting the plan, which asks for a $375 million annual investment in regional transit starting in 2028. The investment, called The Congestion Relief Fund, would support public transit developments that the council says will benefit communities, local economies, the environment, and public health across the Metro Vancouver area.

“We thought it was a really critical time to have those conversations, because all of the parties are looking forward to the coming federal election and they are all in the process of developing their platforms. So for us it was an ideal time to be connecting with all of the major parties,” says Jonathan X. Cote, Mayor of New Westminster and Chair of the Mayors’ Council on Regional Transportation. “We’re recognizing that, even just to keep up with the demand of the public transit services, we need to push the envelope even further.”

Cities are already working with TransLink on the 10-Year Vision for expanding transit services, which consists of three phases of project development such as increasing bus service, improving cycling services, upgrading roads, and expanding SkyTrain lines in Vancouver, Surrey, and Langley.

“There is a third and final phase that is not yet totally funded, but we in the region recognize that [developing] transportation infrastructure doesn’t end after the 10-year plan,” says Cote. “We need to get away from attaching federal funding to one individual project at a time, and get to a more stable predictable source of funding that allows us to allocate that funding and properly prioritize with a more long-range planning perspective.”

“If we had that predictable source of funding, we could look at all of the projects in phase 3 and beyond, and as a region, collectively start prioritizing and implementing all of those projects,” he adds.

Michelle Lam, the Multipass Coordinator for the Kwantlen Student Association, was approached in March to provide feedback for the platform, which she says she supports.

“[KPU is] a commuter school, and we have campuses around the suburbs of Vancouver in Richmond, Surrey, Langley, and Cloverdale, so I think it’s very important to make more connections between the city centre downtown to the suburb areas,” says Lam. “We are seeing more demand in those areas, more students are commuting to work and to school, so they have to be aware of this issue.”

Lam also wants to draw attention to an ongoing TransLink survey called Transport 2050. She encourages students to take part in it and to share their thoughts and ideas about Metro Vancouver’s transit system.

“If we have a more affordable TransLink system, we can get people out of their cars and reduce the amount of single-occupancy-vehicles on the roads,” she says. “That’s how we can cure the congestion problem while at the same time reducing CO2 emissions.”

The Cure Congestion Campaign asked federal parties to take a stance on supporting the plan through a questionnaire, the results of which they are intending to publish before the federal election so that people can be informed about where the parties stand on the issue.

“The goal of the Cure Congestion Campaign is not to be a partisan campaign,” says Cote. “It’s really to elevate all of the parties’ understanding about the importance of investing in public transit in cities like Metro Vancouver, and also getting them to give some clear thought into what commitments should they be making there.”