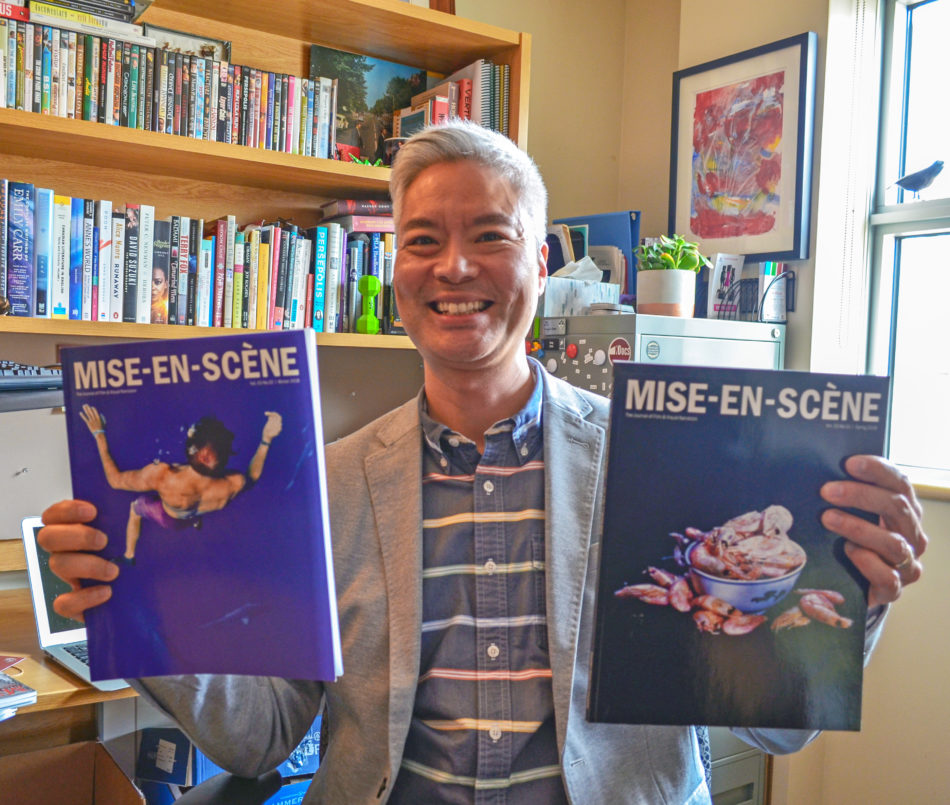 Greg Chan is a KPU instructor in the English department, and Editor-in-chief of Mise-en-Scene. (Kristen Frier)

Mise-en-Scène, a peer-reviewed film studies journal founded and edited by Kwantlen Polytechnic University English instructor Greg Chan, has been publishing bi-annually for three years now. Since its conception in 2015 and the release of its first issue in 2016, Mise-en-Scène has engaged film buffs from all over the globe, accepting contributions from as far-ranged places as Italy and North Africa.

“We’re still growing,” says Chan. “We’re just pleased to be moving into our fourth year and getting people published.”

He’s particularly looking forward to publishing the work of students, including those from KPU, and hopes that the journal will allow many of them to see their work published for the first time. This can be an asset for those who aspire to write film analyses or reviews at a professional level once they’ve graduated, he explains.

The journal was inspired by a project wherein Chan and a small group of fourth-year film studies students guest edited an issue of Film Matters, a North Carolina-based publication. Afterwards, Chan took a year-long sabbatical to research online journal systems.

The platform that Mise-en-Scène is published through now runs out of Simon Fraser University.

“What I love about that system is that it’s completely free,” says Chan. Although some academic journals charge a submission fee for articles to be considered, Chan says he “wanted none of that.”

With the exception of a small print batch, which is available to be viewed at the KPU libraries, the publication is only viewable online. It takes about one minute to create a free profile on the website to get unlimited access to all issues of Mise-en-Scene.

Chan describes the process of putting together each issue as “very slow [and] detail-oriented.” A single manuscript passes through the hands of two reviewers and a copy editor before being sent back to the author, then to a layout team for formatting, then to proofreaders, and finally back to the editor-in-chief. After all that, the manuscript is sent back to the original author so that they have the opportunity to record an audio file of them reading the piece for the sake of accessibility if they so choose.

“It’s a big commitment on the authors’ side too,” says Chan. “When they submit, they have to be committed to a very in-depth process of getting feedback, [then] looking at some of the finer details of the layout.”

Student interns are also a crucial part of the team that puts Mise-en-Scène together. Sanjay Aujla, a KPU student and philosophy major, became interested in the journal after taking one of Chan’s classes on film and how it applies to literary arts. Aujla mostly takes still frames from motion pictures and hunts down the timestamp as part of his job with the journal.

“There are a lot of days where I’m just eating dinner and watching films looking for a small frame of like, one second in the entire movie,” says Aujla. “It’s very holistic work which works really well with my schedule.”

Students who would be interested in contributing to the journal can submit their work to Mise-en-Scène, apply to be a student intern, or participate in on-campus film events such as KDocs, of which Chan is co-director.

“I’m always on the lookout for student interns, so if you have an interest in film studies or media studies you can definitely come see me,” says Chan. “There are lots of positions available.”