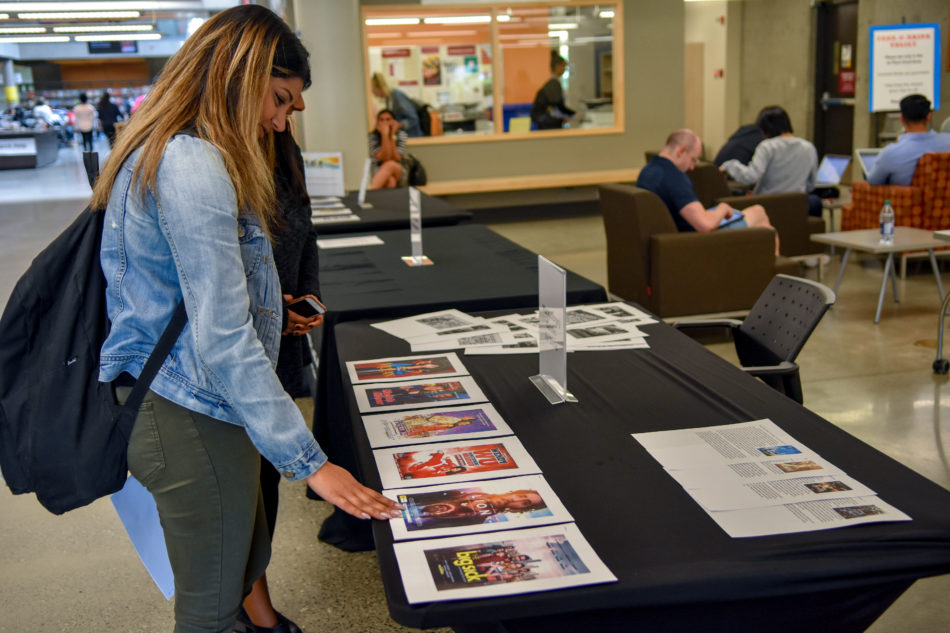 For the month of June, Greg Chan’s 4350 class, Asian Representation in Film and Media, had displays in the KPU Surrey library to highlight both problematic and progressive trends of Asian representation on screen. (Tae Whitehouse)

Students enrolled in Greg Chan’s fourth-year English course, “Topics in Film Studies: Asian Representation in Film and Media”, are tasked with analyzing the misrepresentation, exclusion, and racist depictions of Asian and Asian-American people in media. Through the course they study films as diverse as D.W. Griffith’s Lotus Blossoms (1919) to Jon Chu’s Crazy Rich Asians (2018).

Chan decided that the focus of this film studies course was one that would both interest his students and open their eyes to a prevalent issue in media that is often overlooked.

“This is a perfect opportunity to bring my research interests to a film studies class, and I think its worked out quite well because the students who have signed up are quite passionate,” says Chan. “They can see that it is an issue, and its something that we need to address”

To mark the end of Asian Heritage Month, which took place in the month of May, Chan had his class create a series of displays in the KPU library based on their research into both the problematic and progressive representations of Asians in film.

“I wanted the students to have an opportunity to do something beyond the classroom … but of course with research in mind as well,” says Chan. “I thought this would be a great way to share their research with other students and staff and faculty, so they can see what we’re doing in the course.”

For the displays, students were asked to create either a poster presentation, an annotated bibliography of recommended readings, a “mock library guide” for DVDs, or a comparison of novels and their film adaptations, all through the lens of Asian representation. On June 5, the students presented their pieces in the Coast Capital Savings library on the Surrey campus.

In addition to making their research publicly available, the students also fielded questions from other students, staff, and faculty members who noticed the displays and wanted to know more about their work.

“Quite a few of [the students] had interactions, and had to answer the question ‘tell me about your research,’” says Chan. “The feedback that I’ve gotten from the students so far is that the most exciting part is that they get to not just hand it in, but they get to present it to other people.”

Chan hopes that these displays could have a real effect on the campus, and could lead to the addition of some new films with better Asian representation to the KPU collection.