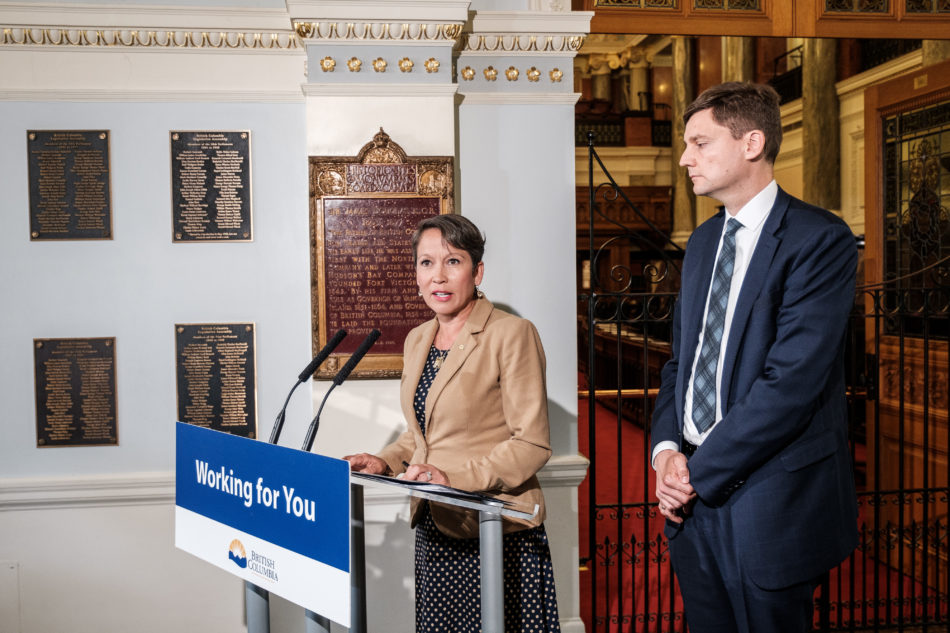 Melanie Mark and David Eby speak about the involvement of post-secondary institutions in money laundering at a press conference. (Flickr/ Province of British Columbia)

The Ministry of Advanced Education, Skills and Training issued a letter to all post-secondary and private institutions on May 28 asking them to help deter money laundering in the province.

The letter includes a request for institutions that accept cash for tuition payments to review their financial policies and submit copies to the Ministry by June 30, and to stop accepting large quantities of cash from students. The Ministry also requested that institutions which do not already have policies regarding the acceptance of cash to develop them as soon as they can for sharing with the government.

“While I appreciate the need to accept payments in cash as a service to students, this has to be balanced by ensuring our post-secondary system not become a target for money laundering,” said the letter signed by Minister Melanie Mark.

This follows the publishing of the second half of a report commissioned by the provincial government and led by former RCMP deputy commissioner and money laundering specialist Peter German. In 2017, German was asked by Attorney General David Eby to investigate and independently review the practice of money laundering in B.C.

The first part of the report was released in early 2018, and largely focused on the complicancy of casinos in the problem of money laundering. The second half was published last month, on May 7, and a formal public inquiry into money laundering in the province was announced by Premier Horgan on May 15.

One section of the second report addresses the possibility that post-secondary institutions could be used by people looking to launder money. They could accomplish this by paying thousands of dollars in tuition before requesting a refund, which can come in the form of online payment or a cheque issued by the institution.

“On a recent occasion, one college was faced with a student who was required to pay a charge of $150. The student attended with $9,000 in cash in a duffel bag and asked to deposit that amount minus the $150 owing,” the report reads. “In effect, the institution was being asked to act as a bank.”

“The idea of money laundering is that dirty money comes in and clean money goes out,” explains KPU criminology instructor Carroll Boydell. “The goal is [to make it] so that the money is not trackable, so that it’s not clear that it’s coming from illegal sources.”

Though the issue of money laundering in relation to gambling, luxury goods, and real-estate has been widely reported on, the vulnerability of post-secondary institutions could be different and more complicated to address.

“You would have to look very deeply into every single person that would be enrolled at the university, so there would be a lot of privacy concerns,” says Boydell. “You want to make sure that you’re not assisting with illegal practices—and I’m confident that Kwantlen doesn’t want to do that—but at the same time, you have to protect the information rights of citizens as well.”

KPU currently accepts cash as a form of tuition payment if done in person at the Richmond, Surrey, and Langley campuses, and according to the 2016 tuition fee policy available to the public online, the school issues refunds via cheque. International students who ask for refunds have their requests reviewed by KPU International “and approved at the discretion of the appropriate Director of Finance in accordance with the Proceeds of Crime (Money Laundering) and Terrorist Financing Suspicious Transaction Reporting Regulations,” as written in the policy.

“KPU has been looking at the possibility of moving to a fully online payment model and will work with the Province as we move forward with our review of policy and practice in this area,” she added.