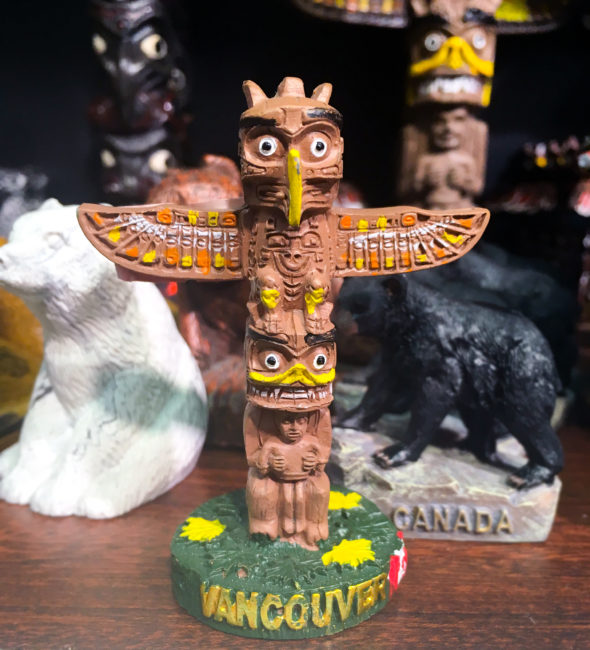 This plastic totem pole was made in China and imported for sale at a souvenir shop in Gastown. (Kristen Frier)

According to a recent article in The Discourse a study commissioned by the Aboriginal Tourism Association of British Columbia in 2010 found that “88 per cent of small Indigenous-themed souvenirs sold in Vancouver, like keychains, stickers and magnets, were created and sold with no participation from Indigenous artists at all.” These knock-off pieces are typically sold for much cheaper than authentic artwork in gift and souvenir shops across Canada.

Another article from the same publication explains that, in Canada, no law exists “against misrepresenting inauthentic Indigenous-themed items as real—and tourist shops across the country are rife with fake Indigenous pieces.”

“The topic of appropriated Indigenous art and culture is something that formed a big part of my area of study,” says Brandon Gabriel, member of the Kwantlen First Nation and graduate of both Kwantlen Polytechnic University and Emily Carr. “This issue has a lineage in Canada. It goes back to the establishment of the Indian Act as well as anti-potlatching laws between 1884 and 1951.”

These laws refer to legislation that gave the Canadian government power to manage the property and possessions of First Nations communities, as well as criminalizing the traditional practices of Indigenous communities.

It’s these laws that Gabriel says were “the catalyst for the outright plundering of Indigenous art and culture all across Canada.”

“Many museum collections across the world house artifacts and art that was stolen from Indigenous communities across Canada,” he explains. “One result from that type of legislation has been the cultivation of culturally appropriative business practices from people who have commodified important cultural and spiritual items that historically were not commodities.”

Gabriel has witnessed these culturally appropriative business practices occur in his own community.

“Non-Indigenous … entrepreneurs, I’ll call them … have tried to take advantage of [the Kwantlen First Nation] by trying to sell our own art and artifacts back to us,” he says.

Gabriel explains that the large markets for Indigenous art that exist across Canada, especially in bigger cities like Vancouver and Victoria, offer a “cash cow” for this type of activity to flourish.

“There are buyers who are unbeknownst to the provenance of what they’re purchasing, and some of them are not equipped with knowledge that would indicate they are buying fraudulent art pieces,” he says. “The dollar amounts are massive—millions of dollars are fraudulently being given to fortune seekers who are preying on not only ignorant purchasers of art, but also communities that have undergone drastic onslaughts of colonization.”

In order to combat these harmful practices, Gabriel says that “we need to look at how Canada is complicit in the commodification and usurpation of Indigenous art, and has probably made the largest profit of both fraudulent and authentic Indigenous art out of any entity.”

He cites the country’s history of shipping authentic art off to museums and collecting taxes off of appropriated products as one example of how Canada profits from authentic Indigenous art.

“Canada is dependent on the narrative that the Indigenous people of this land come from a bygone era that no longer exists, and needs to maintain its authority over these cultures,” he explains. “By marginalizing the image of Indigenous people’s art as a bygone era, it creates a value, a scarcity for the past, which drives up the value of what is, in reality, historically stolen art.”