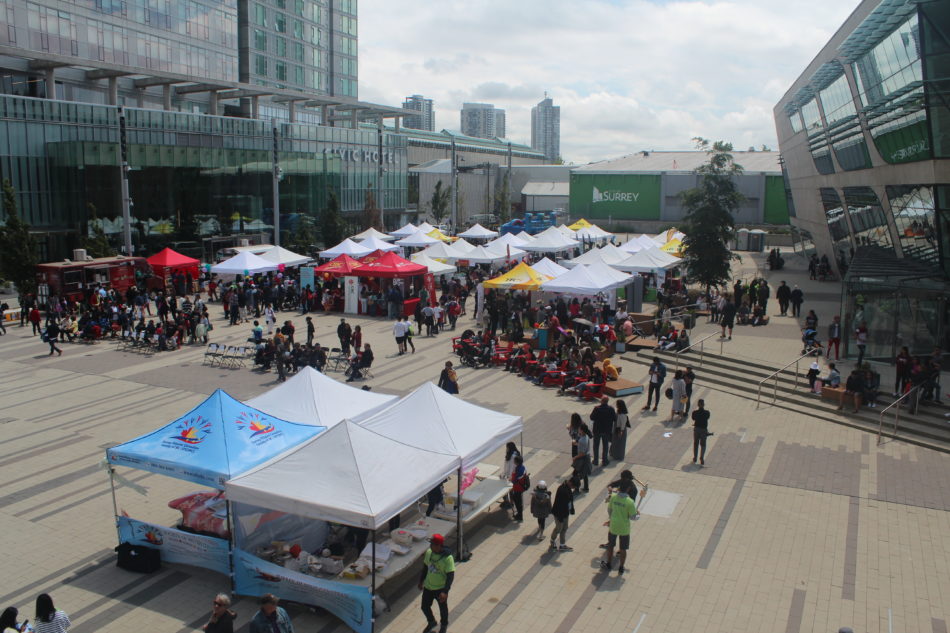 The Filipino Heritage Festival, held on June 22 and 24, was headlined by renowned Filipino singer Yeng Constantino and featured Filipino talent across disciplines.

The two-day event showcased many performances from dance groups such as Praise Team Dance Crew, Bibak Dancers, and Philippine Historama Society. Harvic Dominguez, a Filipino fashion designer from the Mountain Province, presented his work to guests at the closing gala.

Civic Plaza was lined with booths with offerings ranging from street food to immigration agencies. Members of the Filipino community lined up for a Max’s Restaurant food truck and for pork barbeque at Manny’s Grill and Silog House, a local business.

Other booths also supported locals, such as those selling handmade backpacks from the province of Sagada. I proudly sported my own Sagada backpack, which I got when I visited the well-known tourist spot in Baguio. The store-owner and I bonded over the cold wind we missed from back home, and how we found it all the way across the world.

The Heritage Festival was organized by Ed Valdez, who started the Surrey Filipino Canadian Society of British Columbia. For this, Valdez recruited 220 volunteers within the span of seven months.

When I met him, he asked me if I was Chinese. This is very typical of a tito, a Filipino uncle.

“Surrey doesn’t have any community. I started SFCSBC and I tried my best to do this. I’ve been here for eight months, feeding the homeless, schooling for kids, and helping seniors,” he says.

Valdez emphasizes how important it is for members of the Filipino community to help each other. He describes this using Bayanihan, a long-standing Filipino tradition that focuses on support and cooperation.

“It’s the first time [the] festival happened in our community. I’m happy and thankful for all the volunteers. They said it was going to rain today, but everything happens for a reason. That’s why it’s sunny. I tried my best,” says Valdez.

Valdez is also planning on starting a Filipino Center. As a community that highly values family, it is important to take care of elders. The Filipino Center will aim to realize this for elderly Filipinos who do not have familial support.

Valdez has taken the initiative to create these spaces in order to serve the Filipino Community. His dedication to his work is a prime example of what a modern Filipino immigrant in Canada can look like.

“I’m looking forward to continue to serve our community, especially for Filipino seniors. I want to invite all the Filipinos, especially the seniors who need help, because I am here to help,” he says.

A dance crew called Fresh Groove was at the festival in order to raise money to support different groups representing them at an international competition. Jenna Escobiro, the coach for one of the groups under Fresh Groove, is hoping that they’ll also raise enough money to participate in the World of Dance Finals in Los Angeles.

Fresh Groove started as a Filipino dance crew, but now welcomes people from different ethnicities because they recognized what others had to offer.

“I find that the Filipino community is like a family and welcoming to everyone and is really great to be a part of,” says Alicia Kim, a dancer for Fresh Groove.

The community at the Filipino Heritage Festival gathered with the intention of imitating what home and belonging feels like. However, it also created a new community.

There, I found the sense of belonging that had been lost in diaspora. It was in a pork barbecue lineup, surrounded by the sweaty smiling faces of people who looked like me and spoke my language, that this realization hit me the most.

If you’re looking to support local Filipino artists, donations can be made to Fresh Groove’s GoFundMe page.