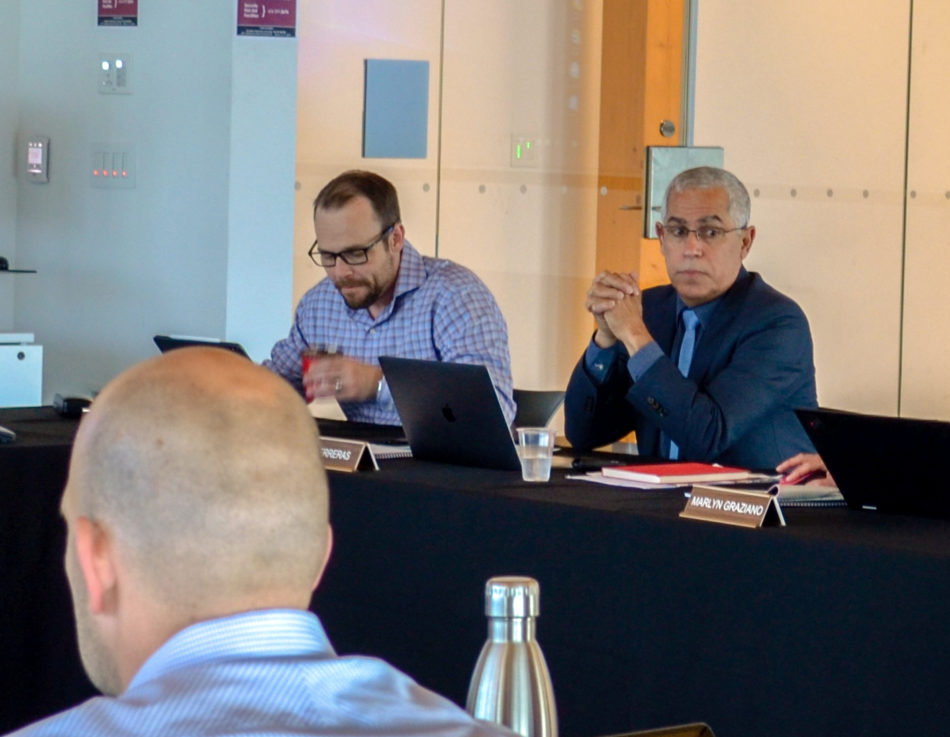 Sal Ferreras (right) at a Board of Governors Senate meeting on June 26. (Kristen Frier)

Correction: The Runner regrets errors made in the previous version of this story. The Faculty of Academic and Career Advancement is not being “discontinued” as reported. KPU’s “Board of Governors and Senate passed a recommendation to retain the governance body of the Faculty of Academic and Career Advancement and re-name it as part of a package of 26 recommendations regarding the future structure of the Faculty.”

Significant changes are coming to the Faculty of Academic and Career Advancement (FACA), as a proposal to reorganize the faculty has passed both KPU’s Senate and Board of Governors.

The proposal recommends that all math and science courses in the FACA be redistributed to relevant departments in the Faculty of Science and Horticulture. It also lays out a plan for the reorganization of the department of Academic and Career Preparation—which includes KPU’s Continuous Intake courses—as well as all Adult Basic Education (ABE) fundamental-level courses, with the exception of those offered under a pre-established arrangement with the Phoenix Drug & Alcohol Recovery & Education Society.

The proposal further recommends that the FACA be renamed to reflect a greater emphasis on English preparatory studies. The newly named faculty will retain the department of English Language Studies, the department of Access Programs for People with Disabilities, and all developmental English courses at or beyond the Grade 10 level.

According to the proposal, the process of administering these changes will begin immediately so as to be fully implemented by the time students begin registering for the fall 2020 term.

KPU Provost Dr. Sal Ferreras, who spearheaded the changes to the FACA, wrote in the final report presented to Senate that the proposal “mitigates KPU’s principal financial concerns while proposing positive steps forward for developmental education.”

Members of the FACA, however, have expressed both disappointment in the decision to split the faculty and concern for the students whose programming will be lost or altered as a result of the changes.

Instructors in the FACA first learned that there may be plans to discontinue the faculty in November of last year, when Ferreras met with them to discuss moving all math, science, and English courses to other faculties.

The initial plan was to implement these changes by Jan. 1, but at a Nov. 26 meeting of Senate, that date was pushed back to April 1 over concerns that the administration was not following KPU’s GV9 policy. This policy lays out the procedures for reorganizing a faculty or department, and recommends the creation of a task force to assess the “impact on students, staffing, facilities, reputation, operating and capital budgets” that would result from the reorganization.

The GV9 Task Force for the FACA reorganization proposal was formed on March 5 and was made up of more than a dozen members, roughly half of whom were students, staff, or instructors from the Faculty of Academic and Career Advancement.

“The [GV9 policy] isn’t specific about the task force. It doesn’t say how many people should be on it or what their qualifications should be,” explains Ferreras. “I wanted representatives from ACA on it because, if [the proposal] was going to go through, then it has to have everybody’s conversations.”

The primary responsibility of the task force was to “consult, solicit, and analyze the data presented by various inputs that will inform a full discussion regarding the advantages or disadvantages of discontinuing the Faculty of ACA,” according to the task force’s report delivered to the provost on April 16.

In that report, the task force made its central recommendation for the “continuance of the [FACA] with its current departments,” as they felt that the faculty, in its current form, allows for a “centralized and coordinated structure for developmental education.”

Though Ferreras adopted several of the task force’s other recommendations into his final proposal to Senate, he did not include the central recommendation.

“I was surprised that the provost’s proposal did not follow the central recommendation of the task force—that ACA remain a faculty and that it retain its current departments,” says Sean Conway, a faculty member in the department of Academic and Career Preparation and a member of the task force. “Even though I didn’t know what precisely the provost’s final proposal would include, I had certainly assumed that this central recommendation would be part of it.”

On May 27 the university’s Senate voted in favour of adopting the Provost’s proposal, which removes math and science courses from the faculty but allows it to retain the departments of English Language Studies and Access Programs for People with Disabilities. The proposal then passed to KPU’s Board of Governors, where it was again approved at a meeting on June 26.

In an open letter, several members of the FACA criticized the decision to apply the provost’s changes, writing that it “directly contradicts the explicit advice of the GV9 Task Force.”

Chris Traynor, the Senate representative for the Faculty of Academic and Career Advancement, was one of the signatories of the letter. He says that he is worried about how the changes to the faculty will affect students who rely on the programming currently offered by the FACA.

“The faculty provides a support and a structure for students who are often trying to transition back into education, or who haven’t faced a lot of success in the past with their education, so there’s a very clear commitment from our faculty members to support those students as much as we can,” he says.

“There is a discipline and a practice within the current existing structure,” Traynor continues. “That’s why the task force made the recommendation it did, to maintain that structure.”

Conway shares Traynor’s belief that the FACA, in its current form, is best suited to serving students who rely on fundamental-level courses.

“As a faculty, underprepared and preparatory students are our focus. They are our discipline,” he says. “We see the value in offering those students an opportunity to pursue higher education.”

Conway adds that the division of the department of Academic and Career Preparation, in particular, could result in some students being left without the courses they need.

“That is definitely a concern that I’m sure my math and science colleagues have as well, that there will be fewer courses and opportunities available for underprepared students at Kwantlen,” says Conway. “That’s always been a concern throughout this process.”

Ferreras says that there are no plans to offer fewer preparatory courses, and considers the changes to the FACA to be a “lateral move.”