At 15 years old, the singer-songwriter is opening for internationally acclaimed acts 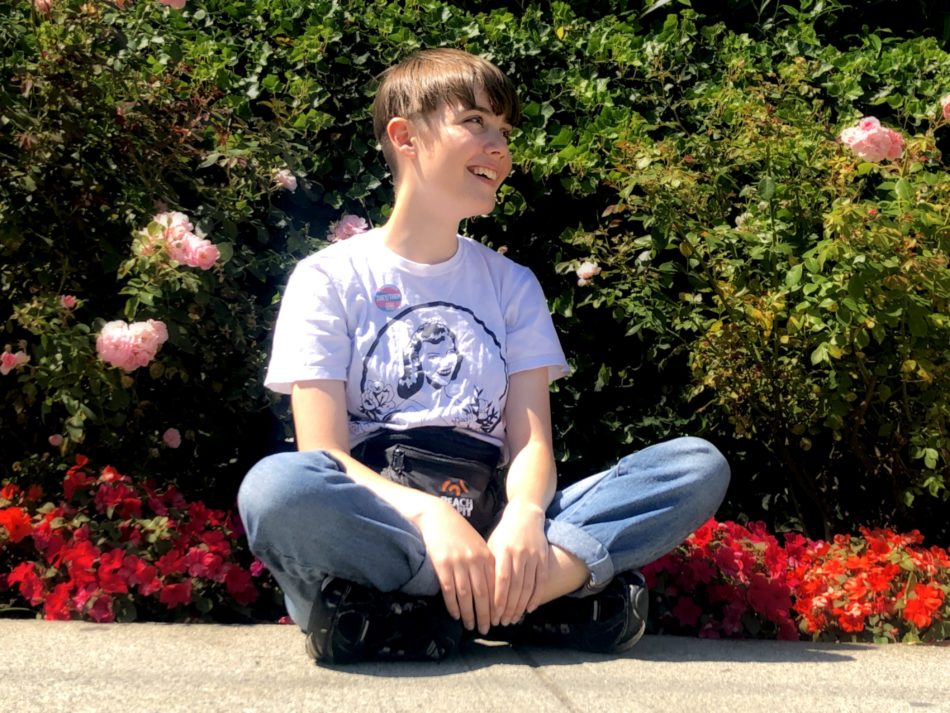 Kylie V’s first LP will be coming out sometime in 2020. (Aly Laube)

Kylie V’s debut, Lotus Eater, was recorded entirely on their iPhone in their family home. Their dad played the drums on the tracks, and at most of their shows, you’ll see Kylie with their grandpa—also a drummer—close in tow. The high school student has only released one record so far under the eponymous project, but with their first official album on the way, they’re already performing alongside beloved indie acts like Peach Kelli Pop, Mal Blum, and Peach Pit.

The latter of those acts is particularly important to the singer-songwriter, who was first inspired to pick up a guitar after hearing a solo on the now-locally-famous Peach Pit record Being So Normal. One track struck such a chord with Kylie that it launched them into a personal journey of self-discovery as an artist and a person.

“That December, I was super sick and I was laying in bed listening to Peach Pit, who I had just discovered at the time. I was listening to ‘Private Presley’ and the guitar solo hit and I basically left my body. I was like, ‘Holy fuck, I need to learn how to do this.’”

Lotus Eater is a collection of the first songs Kylie ever wrote and played live, and has won them comparisons to artists like Julien Baker and Phoebe Bridgers. At that time, they were writing about what they were experiencing in school and within themselves, including coming to terms with their identity and place in the arts community.

That process is still ongoing. This year, they came out as queer and non-binary and started using exclusively they/them pronouns, to the support of their friends and family. Since last year, they met their idols in Peach Pit, started writing an LP, and solidified their musical skills and style.

“That was when I realized there was nothing holding me back from being a part of that,” they say.

“It was cool because I was talking to people I really looked up to and now they’re my friends and peers. That’s insane to me. It’s still surreal.”

Their music has helped them overcome the challenge of finding a productive outlet for self-expression, which they struggled with earlier in life.

“When I was four, I was diagnosed with  autism—so I have really concentrated emotions and interests. I’ll get really into something or I completely overreact to something emotionally or miss social cues, and that’s part of the reason why I didn’t really feel like I fit in as a child, because I wasn’t aware of that. It was like, ‘Everyone functions on a different level than me and it’s weird,’” they explain.

“I was in the top percentage academically because it was the only thing that I knew how to put a bunch of effort into and now I’m more normal because I’m putting more effort into music and other things. I have more outlets and things I really need to do, like, you need to go to school, but if I wasn’t playing music I don’t know where I would be.”

On Aug. 16, Kylie V is playing Enby Party with Me _Gang, Pale North, Sylvia Wrath, and the Macaulay Culkin Cover Band at Black Lab. On Aug. 21, they’re playing with Mal Blum and Cumulus at KW Studios. And on Sept. 5, they’re playing with Peach Kelli Pop and Small Crush at Red Gate. Their music is streamable online at https://kyliev.bandcamp.com.