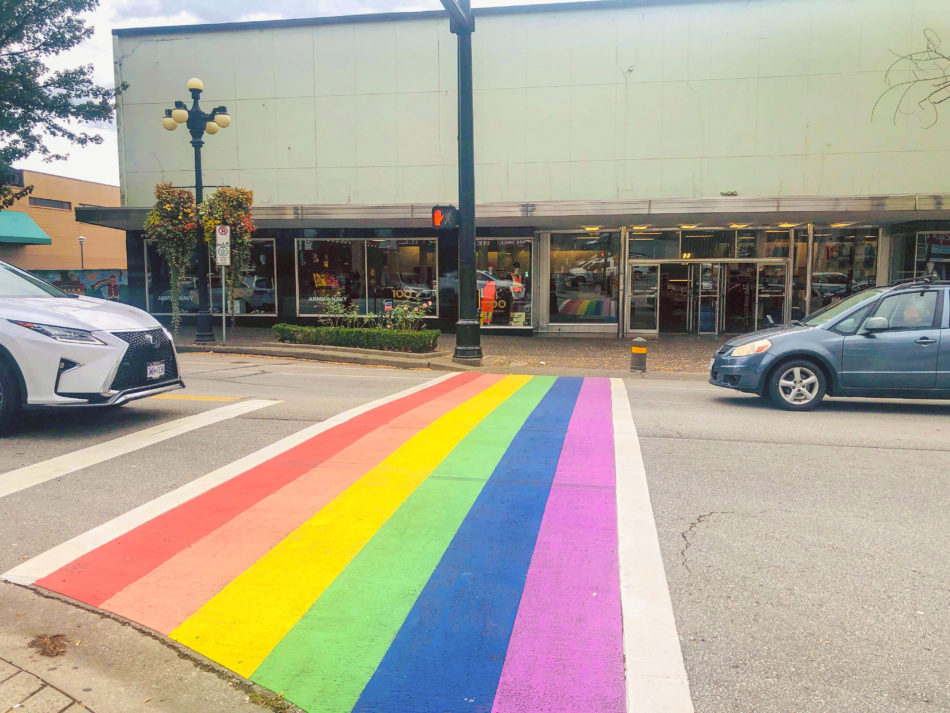 This rainbow crosswalk has been painted in New West Minster since 2015. (Aly Laube)

In recent years, the installation of a rainbow crosswalk has become a popular way for cities such as Vancouver, New Westminster, and Coquitlam to show support for the LGBTQ+ community. Even Abbotsford and Maple Ridge, two of the more rural towns in the Lower Mainland, installed rainbow crosswalks. Abbotsford installed one near the University of the Fraser Valley in September 2016, whereas Maple Ridge installed one near Memorial Peace Park on July 28, 2016 following the Pulse nightclub shooting in Orlando.

Given the increased prevalence of rainbow crosswalks and the near-unanimous support they often receive, the recent vote by Chilliwack City Council to strike down a proposal to install a rainbow crosswalk in their downtown core seems to be a step backwards. The grounds of said rejection—the idea that such a feature would be more divisive than unifying in Chilliwack—is outright baffling. Perhaps the statement most worth exploring for the sake of this column, and perhaps the only one that makes any sense, is that made by Chilliwack City Councillor Sue Knott: “You cannot change attitudes by painting crosswalks.”

She is correct that surface acknowledgements of the LGBTQ+ community do little to change hostile attitudes; the vandalization of the rainbow crosswalks in New Westminster and Fort Langley are proof of that. However, it is also worth noting that attitudes surrounding the community have evolved since the days of Stonewall, and contrary to popular beliefs, this includes a lessening of hateful and bigoted attitudes as well.

Knott is right that no amount of acknowledgement and support will change people’s biases, but she is mistaken in her belief that such measures are designed for the comforts of bigoted people. The indisputable fact which Knott refuses to acknowledge is that LGBTQ+ people exist everywhere, from big urban cities like Vancouver to more rural areas such as Chilliwack. Not all of them can afford to move to bigger cities. Therefore, they need to feel that they have support in the communities they live in. Even seemingly surface-level gestures such as painting a rainbow crosswalk or putting up the rainbow flag can help contribute to a more inclusive environment for members of the LGBTQ+ community.

Any symbol surrounding human rights and marginalized communities—including flags, banners, and logos—are always going to be political in nature, and claims of “political neutrality” from anyone should be a massive red flag. The LGBTQ+ community is no exception, given its long and storied history of political activism.

Such activism is a part of the continuing fight for the same rights as those who are straight and cisgender, including the right to be treated with dignity and respect. If we wish to improve the lives of LGBTQ+ people across the Lower Mainland—and by extension, B.C.—we must first acknowledge the fact that LGBTQ+ people can exist anywhere, rather than dismissing them as only being present in cities.

To that end, I would highly recommend that Chilliwack reconsider their rejection of a rainbow crosswalk.