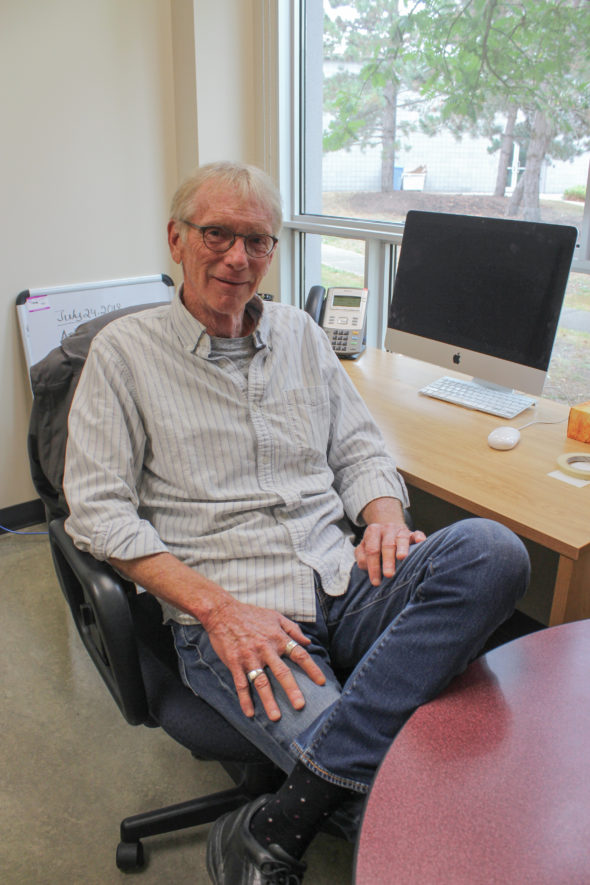 At the end of August 2019, Mark Hamilton, former Chair of the KPU Journalism Department, retired after 20 years of teaching courses at KPU.

Hamilton started his career in the 70s, and worked as a freelance journalist and in different editorial roles in a number of newsrooms. During his heyday, he spent time as the sports and editorial page editor at the Alberni Valley News, an editor at North Shore News, and an editor at Tri-City News.

In 1999, he accepted a position teaching in Richmond at Kwantlen College, bringing his decades of  experience as a journalist and editor to the classroom.

“I had never thought of teaching before, so I thought, ‘I’ll give it a try,’ and so I went in, and I discovered that I really liked it,” he says.

Hamilton taught the principles and techniques of journalism as they evolved throughout the years, from developing photos in a darkroom and pasting together newspaper layouts with wax, to leading classes on multimedia editing and researching digital startup models.

“But teaching students how to use those skills of gathering information and then putting it out in a way that’s fair and ethical, that hasn’t changed.”

Hamilton chaired the journalism program on four separate occasions for various reasons before officially taking up the role again two years ago. Throughout his career as an instructor, he saw the program develop from a two-year diploma to a four-year degree, the creation of several new courses, and the establishment of a dedicated space for the journalism program in the Cedar building in Surrey. Not all of the changes made over the years were positive, though.

“When you work in an institution, there are always frustrations,” he says. “When I was chair of the department, one of the things I had to do was to sit down with the business manager with the faculty of arts and take a look at the budget … and basically cut the budget in half.”

Still, he feels that they were able to do this “without sacrificing too much.”

“It’s one of the things that I always really liked about the Journalism Department, there’s a real emphasis on the students,” he says.

“The thing that makes teaching really worthwhile is that there are times in the classroom when you’re talking about something, you’re showing some really good photographs, or you’re getting students to read a really good piece of journalism, and you look around the room, and you see three or four students’ eyes get really big and the light goes off.”

“They go, ‘Oh, I didn’t know you could do that.’ And that is such a rewarding moment, when you can connect somebody’s passion with the type of skill that you’re teaching.”

“[KPU President] Alan Davis used to give me hell for smoking,” he laughs.

Late last year, Hamilton says he had a feeling that “it was time” for him to retire, and believes that the program will be in good hands moving forward.

“It’s time to turn it over to other people, younger people,” he says. “I’m a Boomer. I have to step aside at some point for you Millennials.”